Nanoleaf essentially created a new smart lighting category with its connected light panels, and since then it has iterated with its pixel-like Canvas and, most recently, its new Shapes Hexagons. The Hexagons already seem to be proving popular with customers, as they’re currently waitlisted, but I got the chance to spend some time with them and have found them to be a unique, interesting and very pleasing addition to my home decor.

The Nanoleaf Hexagons don’t change the basic formula of Nanoleaf’s products: They’re individual light panels, which connect to one control unit that has a hardware controller and connects to the power supply. Each one has an electronic connector that snaps into a two-sided connection module that you can then use to connect another panel, in whatever configuration you desire. The panels attach to walls by way of 3M strips, which are pre-mounted on a plastic pad that makes it relatively easy to detach them from the panels for damage-free removal from walls, and replacement by using new 3M strips if you’re redecorating or changing things up. You can also optionally mount them with screws if you want a more permanent installation.

The panels come in a few different configurations, including a Starter Kit that includes seven panels ($199.99), add-on packs that contain three additional panels and larger packs, including 13 and 19-panel bundles. You can configure them basically any way you want — but if that sounds like too much freedom, Nanoleaf provides a number of preset configuration suggestions, and its app has an augmented reality feature that lets you mock up and preview different arrangements on your walls before installing. I ended up just free-styling with a rough idea of where I wanted the design to start and end in terms of height and width, and was very happy with the results. 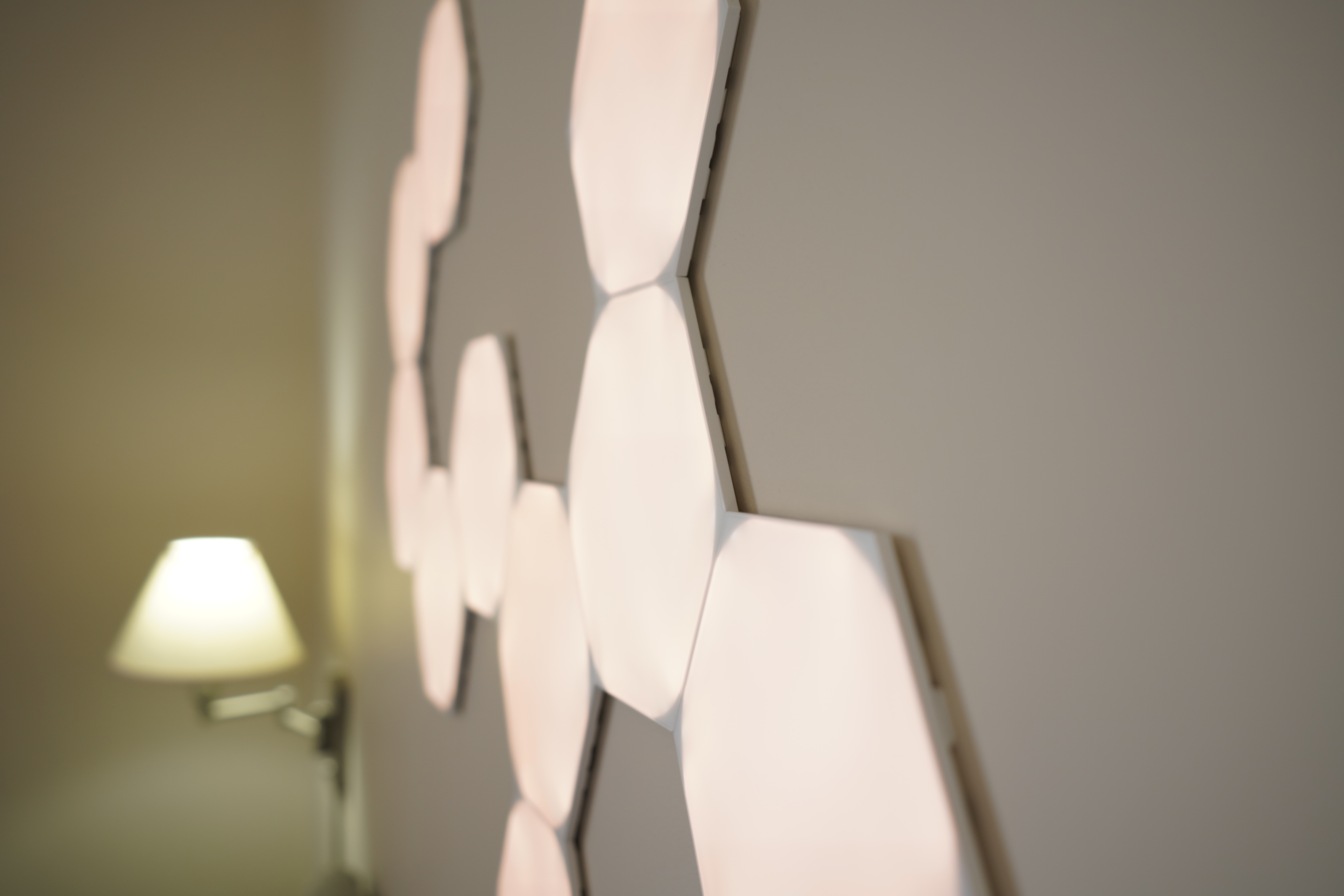 In terms of specs, each panel is very thin at only around 0.24 inches, and they measure roughly 9 inches by 7.75 inches. They each put out around 100 lumens of light, which is not going to replace an overhead light fixture, but which proves perfectly usable for actually supplanting entirely things like bedside lamps and mood lighting in other rooms.

Nanoleaf has made the Hexagon controllable in a number of ways, including via the hardware controller included with the base kit, through their mobile or desktop app and through smart assistants, with compatibility for Amazon Alexa, Google Assistant and Apple HomeKit — all of which proved convenient and user-friendly ways to interact with the panels in my experience. You can also touch individual panels to provoke a lighted response.

The Hexagons also include audio responsiveness, meaning they can react to sound. You can use the default programs included with the app, download user-created ones or make your own, both for sound-reactive modes and for configurations that just play back a set pattern. The sound-reactive modes work amazingly well with music played back through your home audio devices, and really bring the Nanoleaf Hexagons alive — lending an almost biological feel to the devices. 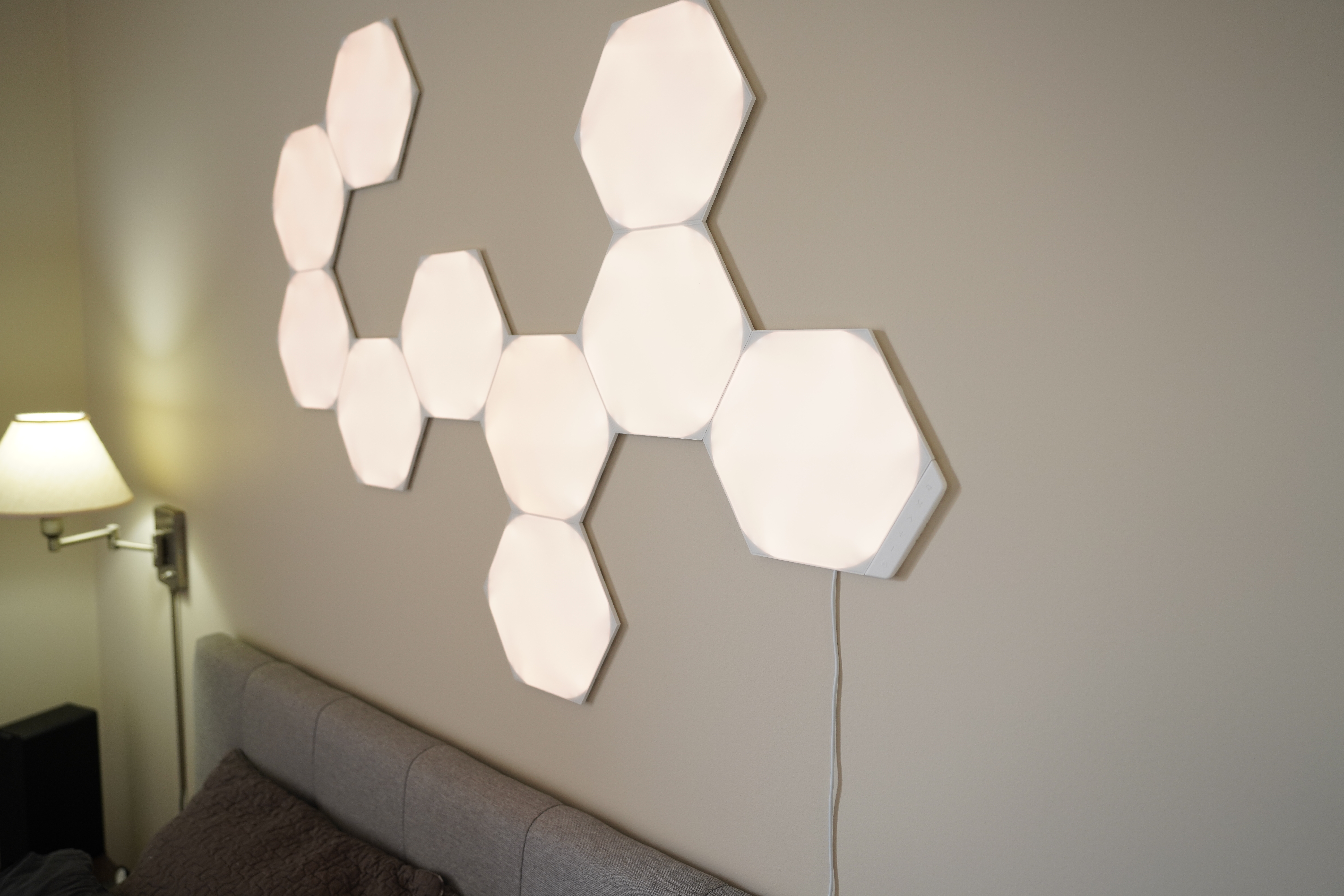 The individual Hexagon panels are each very lightweight and thin, but still feel sturdy and durable. They feature a lighted area that takes up nearly all of their surface, minus rounded corners at each point of the hexagon shape, to create a more organic look once they’re powered on. Each side of the hexagon features a receptacle for the connector clip on the back, allowing you to connect another panel to them and provide power and control through each. One controller unit can control up to 500 hexagons, so you shouldn’t ever really need more than one, and one power supply can provide power for up to 21 hexagons. Each can be snapped to any panel in your configuration for flexible positioning.

Nanoleaf’s original light panels are triangular, and they also created the square Canvas later on. The Hexagons have a honeycomb effect and are the most organic looking to my eye, with an ability to work with a wider range of decor, including softer, less industrial interior aesthetics.

The light emitted by each panel is even and bright, and can be tuned across the RGB spectrum. Whites ranging from warm to very cool can also be achieved with the panels for more general day-to-day use. The hardware controller allows you to cycle through some standard white presets, too, including Warm White (2700K), Reading Light (4000K) and Daylight White (5000K) — plus you can control it to essentially any temperature you want, as well as different colors, through the app.

Nanoleaf has come up with a very simple mounting solution that’s easy to do on your own. I had mine installed and configured in probably around 15 minutes today, once I’d worked out a rough idea of how I wanted to lay them out on the wall. I used a level to get the first panel plumb, but it’s not necessarily required, as the shapes look great even if they’re off-level relative to the room and surrounding objects.

Because of their modular nature, you can easily add more to your existing layout by picking up additional expansion packs, should you decide to grow your collection in the future. There’s enough play with the mounting equipment that you can snap one of the connectors in place behind previously installed panels to attach new ones.

Nanoleaf has evolved their product since its introduction to include a wide range of built-in features, including ambient music modes that use audio to dynamically change the lighting on the panels. This is probably my favorite feature of the Hexagons, and the mode I use most often, especially because I’m often playing music via Sonos throughout the house on most days. 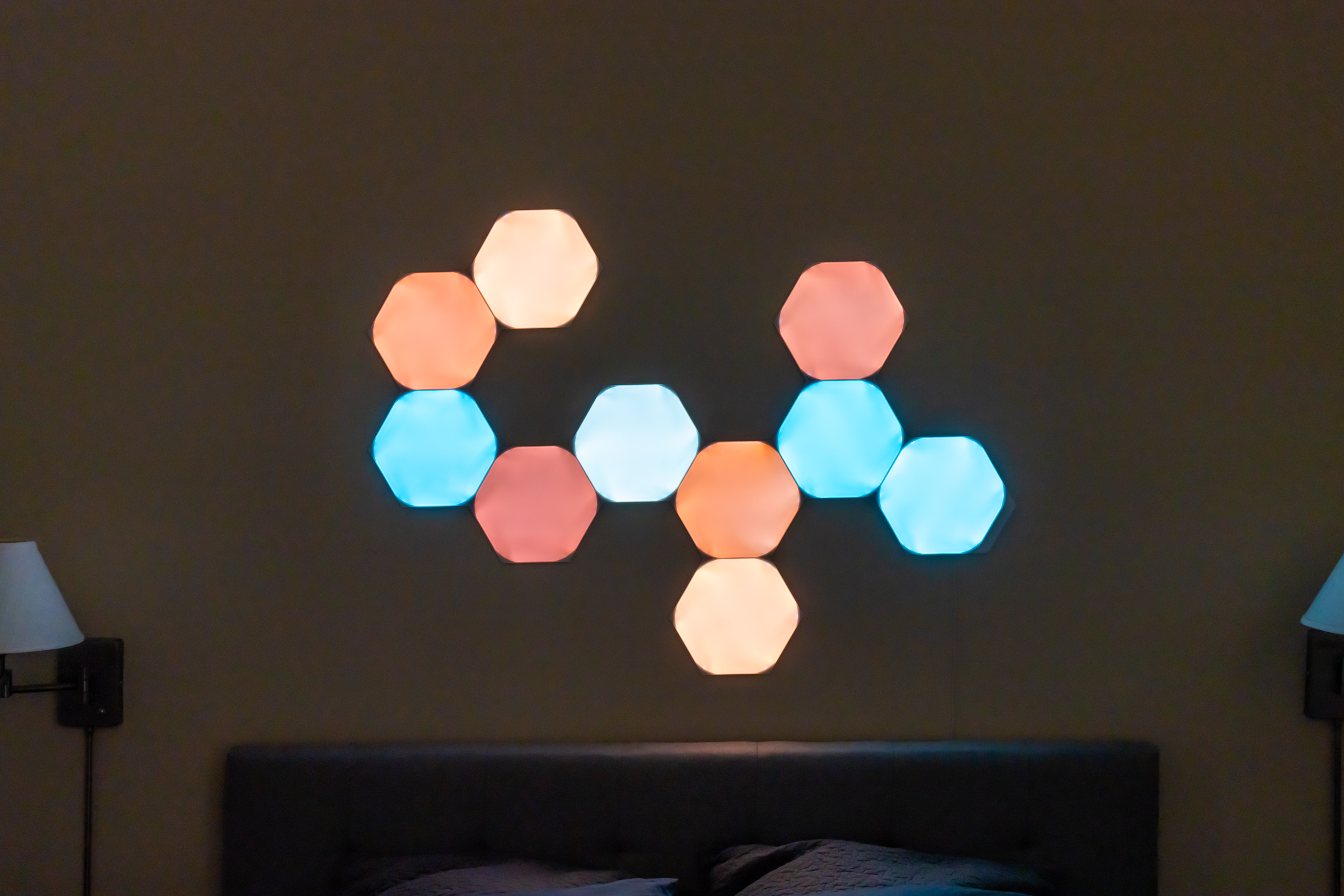 The hardware controller is also a great option in case you want to skip the app features altogether and treat your Hexagons more like a traditional light source — with added flexibility. It allows you to turn the brightness up and down, power them on and off, and cycle through different stored patterns and sequences.

App-based control offers a much wider range of options, however. It provides access to a range of pre-installed scenes, including both standard dynamic ones as well as Rhythm modes (those that react to sound) and you can set scheduled events, including scene changes, and have them occur just once or repeat on whatever schedule you prefer.

A built-in scene creator allows you to fully customize your light show, panel-by-panel, and then save that and share it with the community as well. It’s a great way to get just the look you want, and combined with the scheduler, means you can ensure your setup is custom-tailored to exactly which colors, brightness and effects you’re looking for throughout the day. 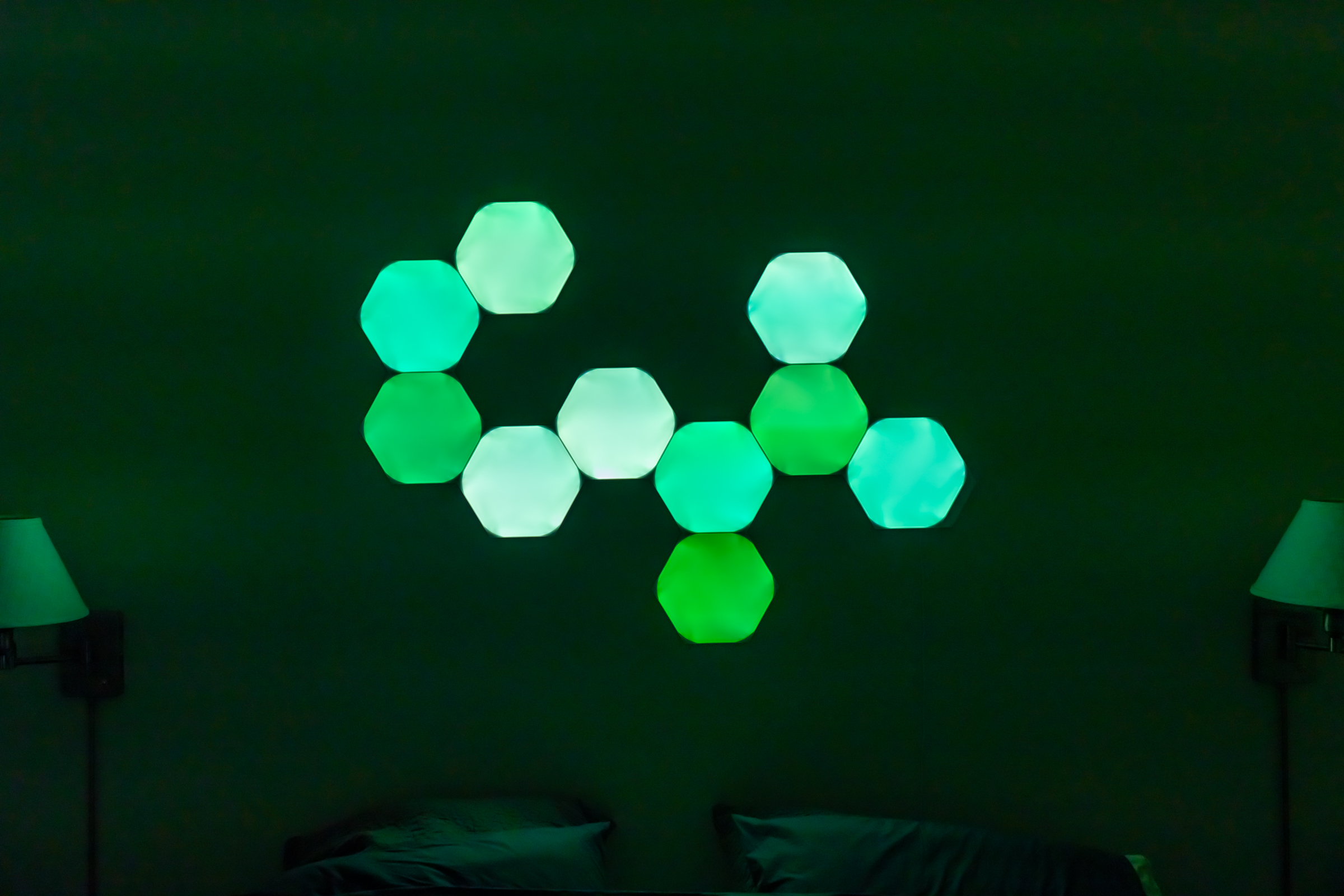 The Nanoleaf Hexagons are a terrific addition to the Nanoleaf lineup, and I think they’re the model that’s mostly likely to appeal to a much broader customer base when compared to the company’s existing options. I personally didn’t expect to be that big a fan of Nanoleaf in general — I’d never been more than mildly interested in their offerings before. But as soon as I powered on the Hexagon, I was amazed at how much I felt like they improved the aesthetics of the space.

Their Rhythm features feels like having a living, dancing electric decor element, and the general pattern and even ambient lighting modes are all very pleasant additions to any room that impress without feeling overly techy or overwhelming of other aspects of your home design and furnishings. They command a high price versus traditional lighting, but when you factor in their smart features, they’re a good value in terms of bringing something unique and highly personal into your home’s look and feel.

Currently, Nanoleaf is sold out of its initial pre-orders, but you can sign up to be waitlisted for when they become available again (the company expects new shipments to resume in August).