Yamo, a self-described “foodtech” startup that produces and sells healthier food for babies and young children, has raised €10.1 million in Series A funding.

Founded in 2016 by CEO Tobias Gunzenhauser, COO José Amado-Blanco and CMO Luca Michas, yamo is on a mission to give parents healthier and easy food choices for their young children. Its products are available online via direct-to-consumer subscription model and through grocery stores. The latter includes Coop in Switzerland, and trials in select Edeka and Rewe stores in Germany. With the new funding, yamo is expanding to France and will launch new food products for children.

“In October 2015 Luca and I were co-workers in the same company, and we decided to eat vegan for a month,” says Gunzenhauser, when asked about the startup’s inception. “After starting our vegan challenge we had to scan food labels for hidden animal products. That was when we realised how many products in the supermarket contain unnecessary sugar and unhealthy ingredients. Out of curiosity, we checked the baby food aisle, naively assuming they would be the cleanest and healthiest food products available. We were quite wrong.”

“Everyone was talking about fresh, healthy, sustainable food for grown-ups, but the world was still feeding the youngest members of our families products that were older than the babies who ate them. Something was very wrong and we didn’t understand it.”

That was when Amado-Blanco, an old friend of Gunzenhauser’s and a food scientist, explained that those products are heat-sterilised, a process that also affects the product’s vitamin content, colour and taste. The trio decided there had to be a better way and yamo was born.

“We talked to many young parents about how they perceived the current supermarket offering, how they feed their kids and what is necessary for them. We saw a clear gap in the market and set ourselves the goal of creating the freshest, tastiest baby purees the world had ever seen,” explains Gunzenhauser. 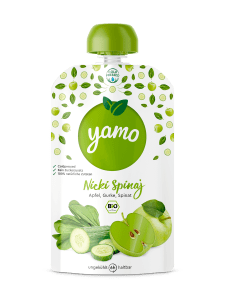 Instead of traditional heat-sterilisation, yamo uses high-pressure pasteurisation (HPP), which kills bacteria in minutes and retains the food’s natural nutrients, taste, colour and smell. Its products last between eight to 12 weeks refrigerated. It also recently launched what it claims is the first non-dairy yoghurt in Europe for kids, using oat-milk.

Gunzenhauser cites yamo’s main competitor as homemade baby food, since the vast majority of baby food is still produced at home by parents. “This might be a result of distrust from parents in today’s offering they would find in retail. Our challenge is to show parents how yamo can support them raising their children healthily without any compromises,” he says.

Of course, the young company is also up against baby food incumbents, and the yamo CEO concedes that the big challenge is that its products are refrigerated. “Normal baby food isn’t,” he says. “That is why we had to convince retailers to change the way they sell baby food. Coop changed its shelves for us, integrating a fridge in the regular baby food aisle.”

There are other startups entering the space, too. For example, in the U.K., there’s Little Tummy and Mia & Ben, and in the U.S. there’s Yumi, among others.