Tinder announced this morning it will begin to test video chat in its mobile dating app with some members in select worldwide markets, including in the U.S. The feature, which allows Tinder matches to go on “virtual” dates when both opt in, will first be available to users in Virginia, Illinois, Georgia and Colorado in the U.S., as well as in Brazil, Australia, Spain, Italy, France, Vietnam, Indonesia, Korea, Taiwan, Thailand, Peru and Chile, also with some members.

Parent company Match had first promised it would introduce video chat in Tinder as part of its Q1 2020 earnings report and touted the feature as a way Tinder was evolving its business in the face of the coronavirus pandemic. The company had also then detailed the pandemic’s impact on its app, which had slowed Tinder user growth in the quarter as social distancing requirements and government lockdowns went into effect.

Tinder ended Q1 with 6 million subscribers, up from 5.9 million in December 2019 — meaning it only added 100,000 paid subscribers during the quarter. For comparison, in the year-ago quarter it added 384,000 paid users. Tinder’s average revenue per user (ARPU) also grew just 2%, mainly due to purchases of à la carte features, not subscriptions.

Tinder parent Match says it had tested video at various times before the COVID-19 outbreak, but said it never saw significant adoption. The pandemic has changed things, however. Today, Tinder allows users to search for matches worldwide through its Passport feature, making its dating app more of a social network. Meanwhile, Tinder users who do want to date now feel almost forced to use video for their early interactions instead of going on briefer “getting to know you” coffee or drink dates, as before.

Without a video option in the app, these users often turned to third-party apps like Snapchat or other video chat apps for these early connections. Meanwhile, daters who prioritized a video option may have even made the switch to rival Bumble, which has offered video for a year. Facebook also recently said it would add video for its Facebook Dating users, as a result of the coronavirus pandemic, forcing Tinder’s hand. 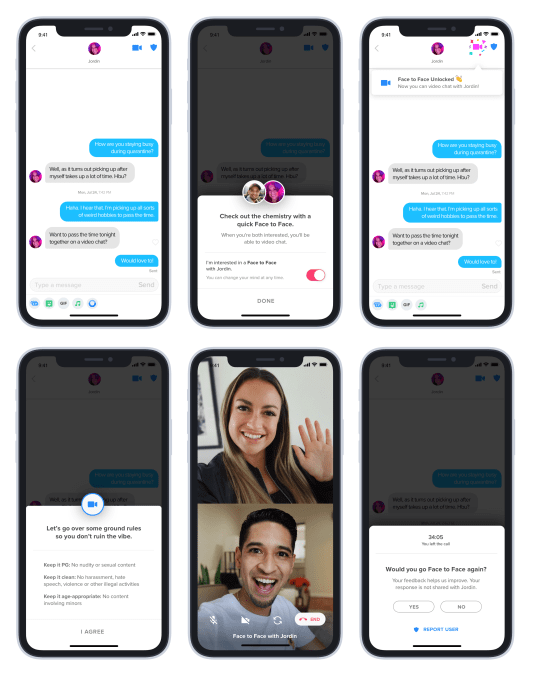 The new feature itself is simple to use. Once two people have matched and are chatting in the app, they can indicate they’re ready to move to a video session by tapping the new video icon. The clever part is that the feature itself isn’t enabled until both matches opt in. The company notes that Tinder users won’t be informed if a match toggles on the video chat feature. The idea is to wait until the discussion comes up naturally, as it often does in a text-based chat.

When both users have toggled on video chat, they have to agree to ground rules before the chat begins. Tinder says calls should remain “PG,” with no nudity or sexual content. The chats are also supposed to stay “clean,” meaning no harassment, hate speech, violence or other illegal activities. Users also agree calls will need to be age-appropriate, meaning without minors involved.

The feature, which Tinder calls “Face to Face,” is enabled on a match-by-match basis, not universally for all matches.

How exactly Tinder plans to properly moderate what appears to be a fantastic new solicitation platform remains less clear. In addition, Tinder’s move to embrace video means it could be putting sex offenders in front of the camera. As an investigative report last year from ProPublica found, most of the Match-owned dating apps, including Tinder, were not screening for sexual predators.

For now, Tinder says users are asked to review the call when it wraps.

In a pop-up, users who finish a video call will be asked whether they would go Face to Face again. Here, they’ll also have the option to report the user, if needed. These sorts of retroactive rating systems don’t do much for anyone who feels unsafe in the moment, of course, and it’s not clear to what extent Tinder will step in to police calls in progress.

Also unclear is to what extent Tinder would step into to stop what may otherwise be consensual sexual activity, including of the paid variety.

Tinder doesn’t seem worried about these off-brand use cases for video chat, however. It says it recently surveyed around 5,000 members in the U.S. and around half of them have already had video dates with a match off its platform over the past month, indicating a willingness to try video for online dating. In addition, 40% of Gen Z members said they wanted to keep using video as an initial step before agreeing to meet in real life, even when places like restaurants and bars were re-opened.

“Connecting face-to-face is more important than ever, and our video chat feature represents a new way for people to get to know one another in-app no matter their physical distance,” said Rory Kozoll, head of Trust and Safety Products at Tinder, in a statement about the launch. “Face to Face prioritizes control to help our members feel more comfortable taking this next step in chats if and when it feels right for them. We’ve built a solid foundation, and look forward to learning from this test over the coming weeks,” Kozoll added.

The feature is launching in testing only starting today, in select markets.