Women have long had the short end of the stick when it comes to employment, regularly finding themselves struggling to break through the glass ceiling for promotions and on average getting paid less than their male counterparts. That situation often gets compounded when the woman in question is a parent, balancing the needs of professional and home life and more.

But we’re seeing a gradual shift among companies to “do better” on inclusion, and that’s opening the door to new opportunities. To underscore that, The Mom Project — a Chicago startup that focuses on connecting women, including parents, with jobs from organizations specifically open to employing people who meet that profile — is announcing a $25 million round of funding to expand its business.

The funding comes on the heels of some significant traction for The Mom Project. Since we first profiled the company in December 2018 (when it had raised a round of $8 million led by Initialized Capital) it has grown to 275,000 users (up from 75,000), and doubled the number of organizations posting jobs on the platform to 2,000, including several major tech companies and other brands like Facebook, Nike, Uber, Apple, Google and Twitter. The company has also made an acquisition of a startup called Werk to add analytics tools to for its business customers.

The Series B round of funding brings the total raised by the startup to $36 million. It is being led by 7GC — a VC that has backed the likes of Jio (the Indian juggernaut raising like crazy right now), Cheddar (the media platform acquired by Altice) and fintech Acorns — with participation also from Citi, Synchrony, SVB and High Alpha, as well as previous investors Initialized Capital, Grotech Ventures, OCA, Aspect Ventures, Wintrust Financial, Irish Angels and Engage VC.

The Mom Project is built around a two-sided platform and both of those sides will be getting a boost with this funding.

On one side, the startup works with businesses to post job listings that specifically target women and those returning to work who might need more flexible terms in their employment engagements, as well as analyse its overall HR strategies around those efforts.

On the other side, it provides a platform to women who fit that basic profile — the average age of its users is between 28 and 44, its CEO and founder Allison Robinson (pictured above with her child) said — providing them both with job listings and other support.

The plan will be to enhance both aspects of the business: more tools for enterprises to better engage The Mom Project’s community, as well as manage the recruitment and employment of people better; and more tools for Mom users, including building out an interactive community (and forums) to better “address the pain points of family and career,” Robinson said.

While there are a lot of job boards online — indeed recruitment dot-coms were some of the first successful businesses in the earliest days of the World Wide Web, meaning there are giant legacy players out there — The Mom Project is a strong example of how that model has been evolving.

Specifically, we’re seeing a flourishing of startups, and sites, focused on identifying and cultivating job opportunities for specific segments of the market, be it specific types of jobs like engineers (such as Triplebyte), or a specific demographic (like The Mom Project, or RippleMatch or Handshake), or both (as is the case of another hopeful disrupting the job market, Andela) — in ways that more general job boards like those on LinkedIn or Indeed either don’t highlight as well or simply cannot address.

These are not only connecting with specific talent groups, but speaking to the needs of businesses that are trying to make more of an effort to boost their workforce diversity as part of larger inclusion policies: they are also struggling, in their case. to find effective ways to target specific kinds of candidates. 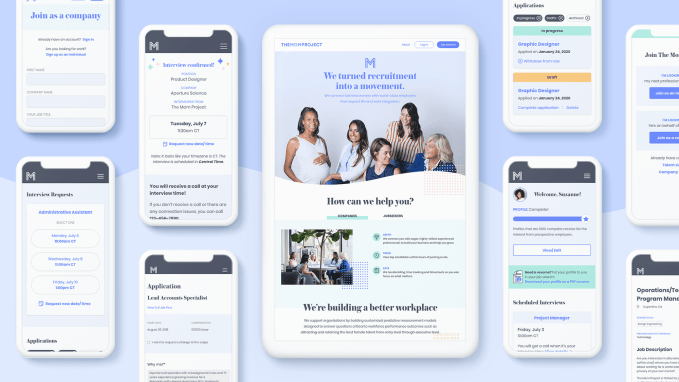 As we noted when we previously profiled The Mom Project, it was started when Robinson herself struggled to return to work after having a child — her previous career had her working as an executive at Pampers — and it’s a problem that she is far from alone in having identified (and I can confirm that emphatically). The company’s focus not only on addressing that but executing on it well are essentially the two reasons The Mom Project has grown.

Needless to say, recent events have had a huge impact on how all those general employment trends, and the recruitment industry, have been going.

We’ve seen unprecedented job losses, hiring freezes, a push for remote working all suddenly become the norm. All of that has had a mixed impact on The Mom Project.

In some ways, it plays into what the startup has been building all along. Currently some two-thirds of all jobs posted and that people are looking for on The Mom Project are focused on fixed-term work, rather than permanent positions, and so as companies slow down their normal recruiting, it leaves a space for the kind of work that people who need more flexible schedules may be able to do. That’s at the same time that the companies themselves may be reducing headcount overall for all kinds of work, however.

Another big theme has been a redoubled effort to improve inclusiveness when it comes to racial diversity. That too has direct relevance to the female workforce, Robinson noted.

“Sixty percent of the job losses in the pandemic have been women, and the statistics have been even worse for women of color,” she said. “It’s like a canary in the coal mine.”

While The Mom Project doesn’t have any tools today to surface candidates that meet more diverse profiles on that front, Robinson said that they are considering it and how to approach that in a way that works.

Meanwhile, The Mom Project is also trying to do more to speak to the other side of its marketplace and the struggles they are having.

It’s launched a $500,000 fund, distributing grants specifically to small businesses that are its customers (that is, hiring via The Mom Project) the are finding it especially tough right now. (And indeed, many have pointed to the especially hard hit SMBs are taking at the moment.)

All of this is to say that there remains a huge market opportunity here and there is an argument to be made that companies good at identifying clever ways of targeting a gap, and executing on that well, are strong candidates for identifying and filling other gaps in the future — one reason why investors are knocking.

“There is a material disconnect between senior female talent and executive roles at major corporations, not for lack of interest, however the difficulty to institutionalize in large enterprise. The Mom Project’s platform enables corporates to source, onboard and manage variable labor at the highest skill level, a function historically that has been offline and manual for FTEs and even more so difficult for flexible employees,” said Jack Leeney, founding partner at 7GC, in an emailed interview.

“In our diligence, the value add to senior HR managers of an analytic platform that enables the oversight of a variable work force was the single most important factor to integrating The Mom Project initially and at scale. There is no other growth company, digital-first HR company or large-scale talent agency that is addressing the female exec population with an enterprise grade digital solution.”