Frank Patterson, president and CEO of Pinewood Atlanta Studios, said that in March, its 1 million-plus square feet of studio and office space were “utterly full” with two major films and three streaming shows in production. (Pinewood doesn’t disclose what’s currently shooting, but past films made at the Atlanta studio include “Ant-Man and the Wasp” and “Avengers: Endgame.”)

Of course, that all came to a halt due to the COVID-19 pandemic. And in the months since, industry groups — including a task force with members from a variety of Hollywood guilds and unions — have been putting together guidelines for how production can resume safely, with recommendations on everything from meal times (which should be staggered, with individually wrapped food) to crowd scenes (which should be minimized).

Patterson said he’s been working with the guilds and the studios to figure out Pinewood Atlanta’s reopening. At the same time, he said he didn’t want to simply “follow along,” but also to develop plans and safety measures of his own.

“To be honest, we were nervous that there was no known roadmap here,” he said. “Nobody has dealt with this in the movie business before.”

Today, the studio is announcing new safety measures that fall into three broad categories — security, facilities improvements and best practices and protocols. Patterson said that on the security front, Pinewood Atlanta was already “one of the most secure studio lots in the world” (after all, Marvel is very protective of its secrets), but it has now upgraded everything, including its badging systems, and it will be limiting access to only essential cast and crew. 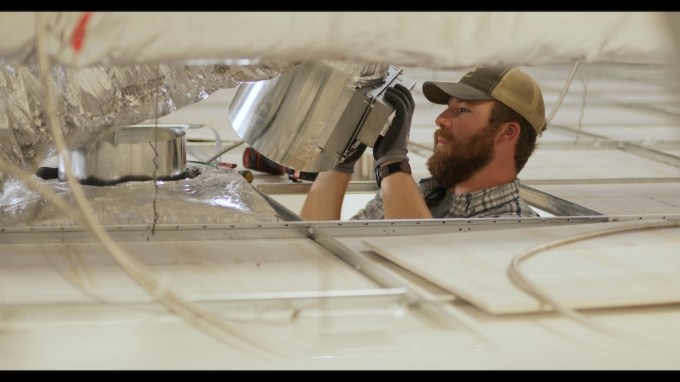 In order to test everyone entering its facilities, Pinewood Atlanta is also partnering with BioIQ, which will be providing the kits and overseeing the testing process.

On the facilities side, Patterson said improvements include “obvious things” like protective equipment and handwashing stations, but also technology created by Synexis that pumps dry hydrogen peroxide into the air to reduce airborne viruses and other germs. A similar solution was already used by the Tampa Bay Rays to disinfect their clubhouse.

“What this does is, it injects dry hydrogen peroxide into the air,” Patterson said. “If you sneeze — this is how it works for [Major League Baseball] — if you sneeze, it kills it instantly on contact.”

Along with the new facilities, there will be a broader array of best practices — like using smaller sets and crews — that Pinewood will be working with the production teams to implement.

None of this, of course, can fully eliminate the risk of disease. As Patterson put it, when his team started investigating possible technologies, “We wanted to find out: What is the best solution? Well it turns out, there is no such thing.” Instead, they tried to answer the question: “What is the best we can do to keep people as safe as possible?”

And it sounds like movie and TV studios are preparing to resume production, particularly as movie theaters reopen and streaming services eagerly await new content. Patterson predicted that construction of new sets could begin in July, with actual shooting resuming in mid-August.

“There’s no doubt that for all our planning, [production is] going to take longer,” Patterson said. “In the process, it’s going to cost more money. There’s no choice on this. We have to keep people safe.”

Theaters are ready to reopen, but is America ready to go back to the movies?