Apple is responding to the COVID-19 crisis with a range of new features across its software platforms. Some are intended to directly combat the threat of the novel coronavirus, as with Apple Watch’s new handwashing feature. Other updates can be seen in a new light in the COVID-19 era. For example, your Apple Watch can track your TikTok dances as a “workout,” now that you’re not going to the gym. A new sleep feature pushes you to get more rest. Apple Maps has also added a dedicated cycling feature and can show you where to find hiking trails.

While many of the new features are more reactive in nature, the handwashing timer for Apple Watch aims to directly impact consumer behavior for the better.

Today, many people still don’t know how long to wash their hands or how to properly scrub them to reduce the spread of germs. Apple Watch wearers will get a push in the right direction, however. The new feature arriving in watchOS 7 later this year will be able to detect when handwashing has begun, using machine learning models that detect the motion of the Watch wearer’s hands. It will also use audio to confirm the sounds of water running or bubbles squishing. 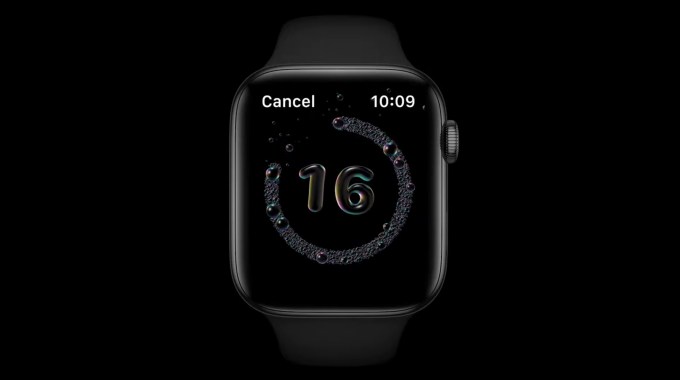 This will make the Apple Watch the first to offer a handwashing detection feature.

As the wearer washes their hands, a countdown timer will appear on the watch face so you’ll know how long to wash. This will also use haptics and sounds to encourage you to continue, almost gamifying the experience. The device will also offer a little coaching along the way and will even push you to finish washing if you’ve stopped.

The feature is small but could have a notable impact on consumer behavior. 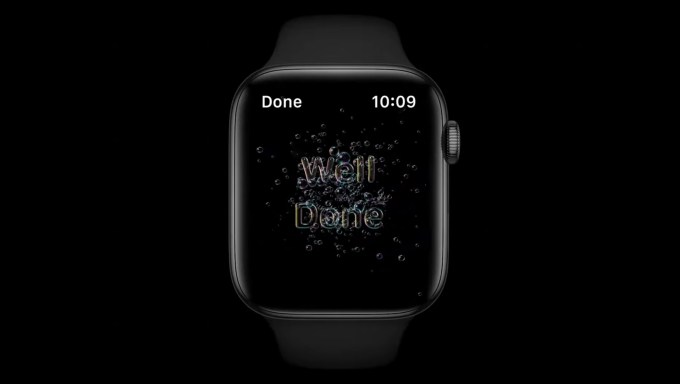 The Apple Watch will also push users to care about other aspects of their health and wellness. While that’s always been a key area of interest for Apple’s wearable platform, being healthy takes on a new level of importance in the COVID-19 era.

For instance, a new sleep tracking function for Apple Watch does more than count your zzz’s. It also helps users meet their sleep duration goals by allowing you to set both a bedtime and the time you want to wake up. The sleep tracking feature works in conjunction with iOS 14’s new “Wind Down” functionality, which will begin to minimize distractions ahead of your bedtime. 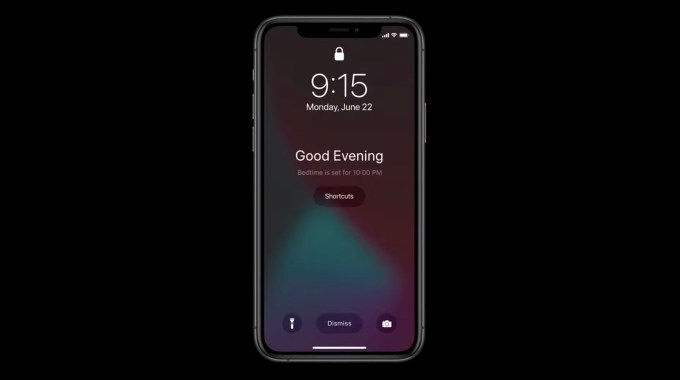 A calmer, notification-free home screen displays in the evenings so you can begin to transition from your wakeful, busy hours to a calmer, more relaxed state.

Wind Down shortcuts help you start to relax with quiet music or content from a meditation app.

At bedtime, your iPhone screen dims and your Apple Watch goes into sleep mode, turning the screen off. You can wake it with a tap if you want to check the time on a simple face. 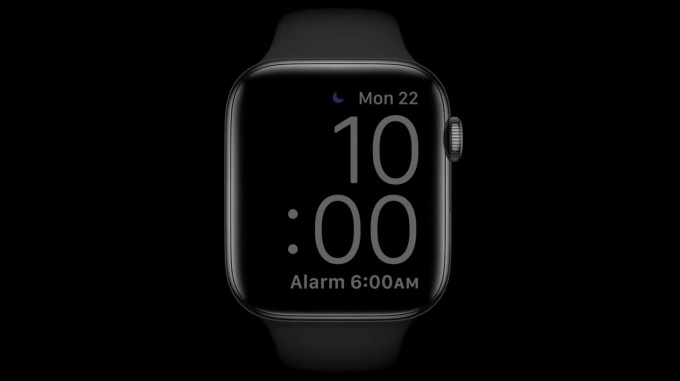 As you sleep, the Watch uses machine learning to track your movements, even the rise and fall of your breath, to determine how you’re sleeping. You can later view your sleep trends, based on this tracking, in the Apple Health app.

In the morning, you can choose to wake up to a haptic vibration on your wrist, instead of a more jarring audible alarm. This could help you wake up without disturbing your partner, who may still be sleeping in. 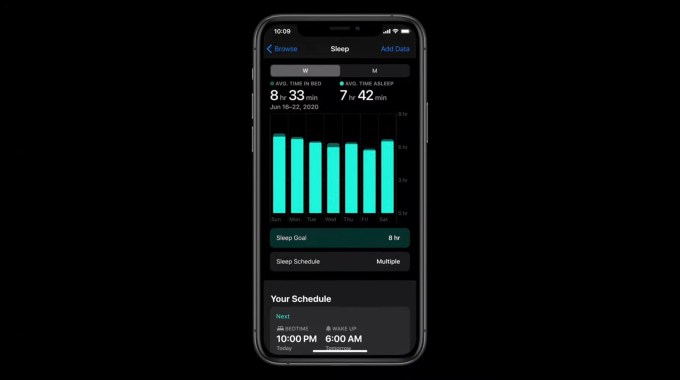 Image Credits: Apple under a license.

Though Apple didn’t reference COVID-19 by name when introducing its new Apple Watch sleep tracking features, the company briefly noted that sleep is useful in “keeping you healthy.”

Other aspects where Apple addressed the COVID-19 crisis aren’t perhaps as obvious.

Apple Watch’s addition of “dance” as a Workout type in watchOS 7 could have been dreamed up for tracking cardio exercise classes, like Zumba. But today, it feels like a nod to all those Instagram Live DJ parties happening as people sheltered in place under government lockdowns. Or even an acknowledgement of how many users are “working out” by practicing the latest TikTok dance at home. 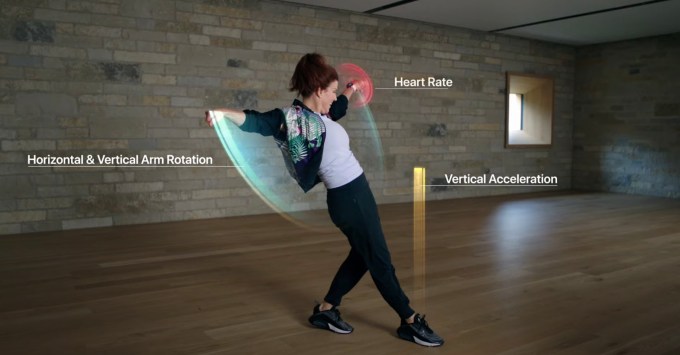 Meanwhile, Apple Maps was due to get cycling directions as part of its upgrade. But the way Apple designed its new biking feature is one that seems to understand that many people will reduce their reliance on public transit for years to come in favor of other transportation options.

And they’ll want more than just directions and route time. 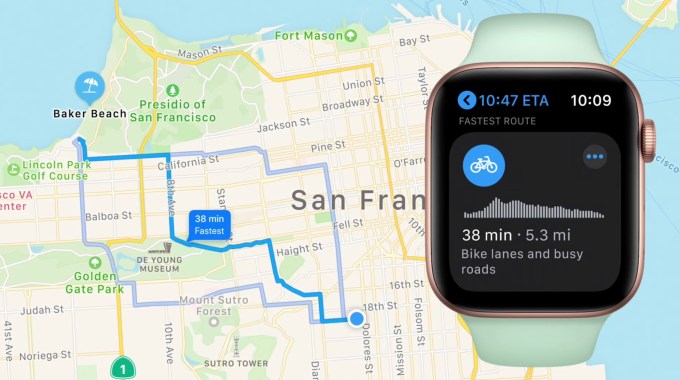 Starting in major markets — New York, Los Angeles, San Francisco, Shanghai and Beijing — Apple Maps users will not only be able to calculate a biking route, but also will be able to see other aspects of that trip, like elevation changes or if there are bike lanes available. 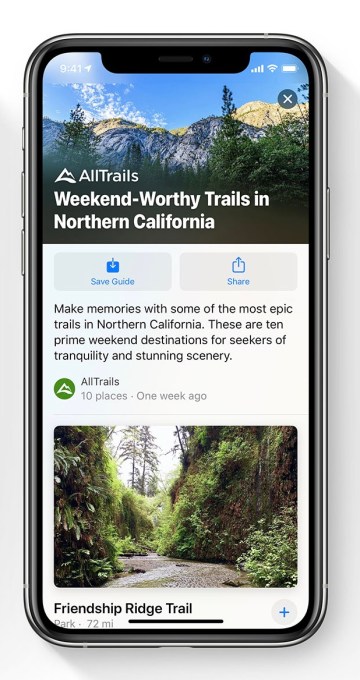 The feature will even suggest if the biker should take a flight of stairs to save themselves time. And bikers can search for and add places optimized for cyclists, like bike repair shops, then place those on their route.

Then there is Apple Maps’ new “Guides” feature, largely a way to combat Google Maps’ Explore, powered by Google’s vast business data. Here, Apple has partnered with AllTrails to add information on hiking, at a time when outdoor activities have become one of the only ways we can safely entertain ourselves without fear of catching the virus.

In another response to the COVID-19 crisis, Apple has added the option for users to customize their Memoji — their personalized emoji — with face coverings, like a mask.

Though a minor tweak, the option gives users a chance to display their character as a mask wearer, which could help to destigmatize the idea of mask wearing in a market like the U.S., where it isn’t yet part of the cultural norm.

There was also a hint of how Apple understands the changes being wrought by COVID-19 in what it didn’t announce.

For example, Apple has been focused in recent years on addressing the growing criticism around the addictiveness of its iPhone device and its apps that constantly clamor for attention. It introduced a Screen Time platform in 2018 to allow iPhone owners to schedule time away from their devices, set limits on app usage, and more for either themselves or their kids. Last year, it expanded parental controls to limit who kids could call and FaceTime, and when, as part of this Screen Time system. It offered a way to more easily silence notifications.

This go around, the concept of “too much screen time” is nowhere to be found.

This aligns with the choices consumers have made during COVID-19. According to App Annie, the global daily time spent per user on mobile increased 20% to 4 hours 20 minutes in April 2020 from 2019.

And as the pandemic rages, many parents have long since given up on reducing their kids’ screen time, as well.

Apple made no mention of upgrades in this area during its keynote. In fact, it presented device owners with a solution that’s more reflective of where we are now: With so many apps and games cluttering our iPhone, we can’t even find the ones we want anymore. The new iOS 14 user interface with its App Library and widgeting system is designed for a time when we’re using a lot of apps, not trying to distance ourselves from them. And Apple is here to accommodate that need.