Whatever you do, don’t take your finger off your phone screen.

MSCHF, a company striving to build a flashy brand by creating viral moments, is taking the wraps off of their next stunt, an internet-wide competition with as much as $25,000 on the line.

How do you win the cash? Open up their new app, put your finger on the screen and don’t take it off. Whoever in the world can keep their finger on the screen longest will win a cash prize, thought the exact amount of that prize is actually up to the folks that the winner beats out. Users of the app will vote on whether the contest’s winner should take home $25,000, a penny or a number in between. The winner will take home the average of all of those user votes. The contest kicks off next Tuesday. 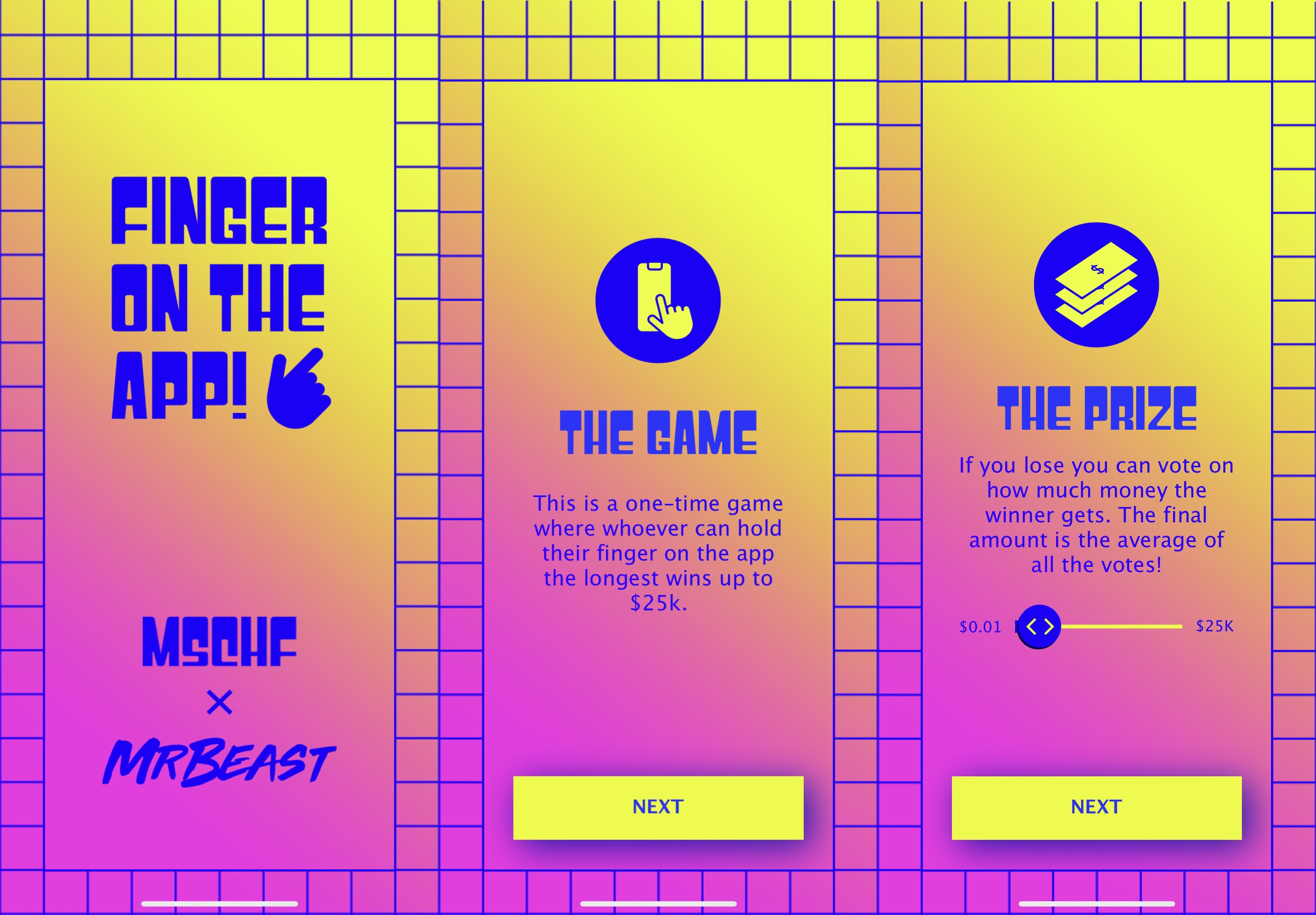 The application aptly called Finger on the App is MSCHF’s 24th drop. The company’s drops occur every two weeks. It’s one of the company’s first collaborations, done with YouTuber MrBeast, who has more than 37 million subscribers and has become known for some of his videos featuring endurance challenges. MSCHF’s strategy head Daniel Greenberg says this latest stunt has been in the works for 4-5 months.

“This is a one-time game, everything MSCHF does is built to be short-lasting,” Greenberg says. “If this is done right, this could truly be a moment on the internet.”

Last time we covered the folks at MSCHF, they were building a pirate radio-esque website that live-streamed Netflix, Hulu and HBO streams on the web in a short-lived experiment that soon shut down as the lawyers swarmed.

As is the case with any internet-wide contest with money at stake, the team was forced to take extra efforts to ensure that users can’t cheat their way to victory. Users can’t set a stylus on the screen and then rake in the money. A competitor will have to follow a little circle on the screen and drag their finger to the spot within a certain time frame. The simple UI mechanics accompany other safeguards to ensure that the winner is actually using their finger on the app, not software that can spoof user actions.

“We’ve taken God knows how many precautions to prevent cheating,” Greenberg says, who cautiously wagers that the app may be “uncheatable.”

Aside from trying to ward off cheaters, the company is doing its best to create mechanics that encourage users to drag their friends into the contest. Users can gain extra lives in the game (up to three) by playing next to friends within Bluetooth range.

What’s the point of all of these fun, little stunts? Finger on the App has no ads, no sponsors and no cost of admission. The company’s employees and investors are betting that the sum of these drops could be MSCHF morphing into the next Supreme. The company has raised at least $11.5 million in funding according to SEC filings.

Finger on the App is live in the Apple App Store. The contest kicks off on June 30 at 3:00 p.m. EST and ends when the second-to-last finger slides off-screen.