Have you ever wondered why online ads appear for things that you were just thinking about?

There’s no big conspiracy. Ad tech can be creepily accurate.

Tech giant Oracle is one of a few companies in Silicon Valley that has near-perfected the art of tracking people across the internet. The company has spent a decade and billions of dollars buying startups to build its very own panopticon of users’ web browsing data.

One of those startups, BlueKai, which Oracle bought for a little over $400 million in 2014, is barely known outside marketing circles, but it amassed one of the largest banks of web tracking data outside of the federal government.

BlueKai uses website cookies and other tracking tech to follow you around the web. By knowing which websites you visit and which emails you open, marketers can use this vast amount of tracking data to infer as much about you as possible — your income, education, political views, and interests to name a few — in order to target you with ads that should match your apparent tastes. If you click, the advertisers make money.

But for a time, that web tracking data was spilling out onto the open internet because a server was left unsecured and without a password, exposing billions of records for anyone to find.

“There’s really no telling how revealing some of this data can be,” said Bennett Cyphers, a staff technologist at the Electronic Frontier Foundation, told TechCrunch.

“Oracle is aware of the report made by Roi Carthy of Hudson Rock related to certain BlueKai records potentially exposed on the Internet,” said Oracle spokesperson Deborah Hellinger. “While the initial information provided by the researcher did not contain enough information to identify an affected system, Oracle’s investigation has subsequently determined that two companies did not properly configure their services. Oracle has taken additional measures to avoid a reoccurrence of this issue.”

Oracle did not name the companies or say what those additional measures were, and declined to answer our questions or comment further.

But the sheer size of the exposed database makes this one of the largest security lapses this year.

The more it knows

BlueKai relies on vacuuming up a never-ending supply of data from a variety of sources to understand trends to deliver the most precise ads to a person’s interests.

Marketers can either tap into Oracle’s enormous bank of data, which it pulls in from credit agencies, analytics firms, and other sources of consumer data including billions of daily location data points, in order to target their ads. Or marketers can upload their own data obtained directly from consumers, such as the information you hand over when you register an account on a website or when you sign up for a company’s newsletter.

But BlueKai also uses more covert tactics like allowing websites to embed invisible pixel-sized images to collect information about you as soon as you open the page — hardware, operating system, browser and any information about the network connection.

This data — known as a web browser’s “user agent” — may not seem sensitive, but when fused together it can create a unique “fingerprint” of a person’s device, which can be used to track that person as they browse the internet.

BlueKai can also tie your mobile web browsing habits to your desktop activity, allowing it to follow you across the internet no matter which device you use.

Say a marketer wants to run a campaign trying to sell a new car model. In BlueKai’s case, it already has a category of “car enthusiasts” — and many other, more specific categories — that the marketer can use to target with ads. Anyone who’s visited a car maker’s website or a blog that includes a BlueKai tracking pixel might be categorized as a “car enthusiast.” Over time that person will be siloed into different categories under a profile that learns as much about you to target you with those ads. 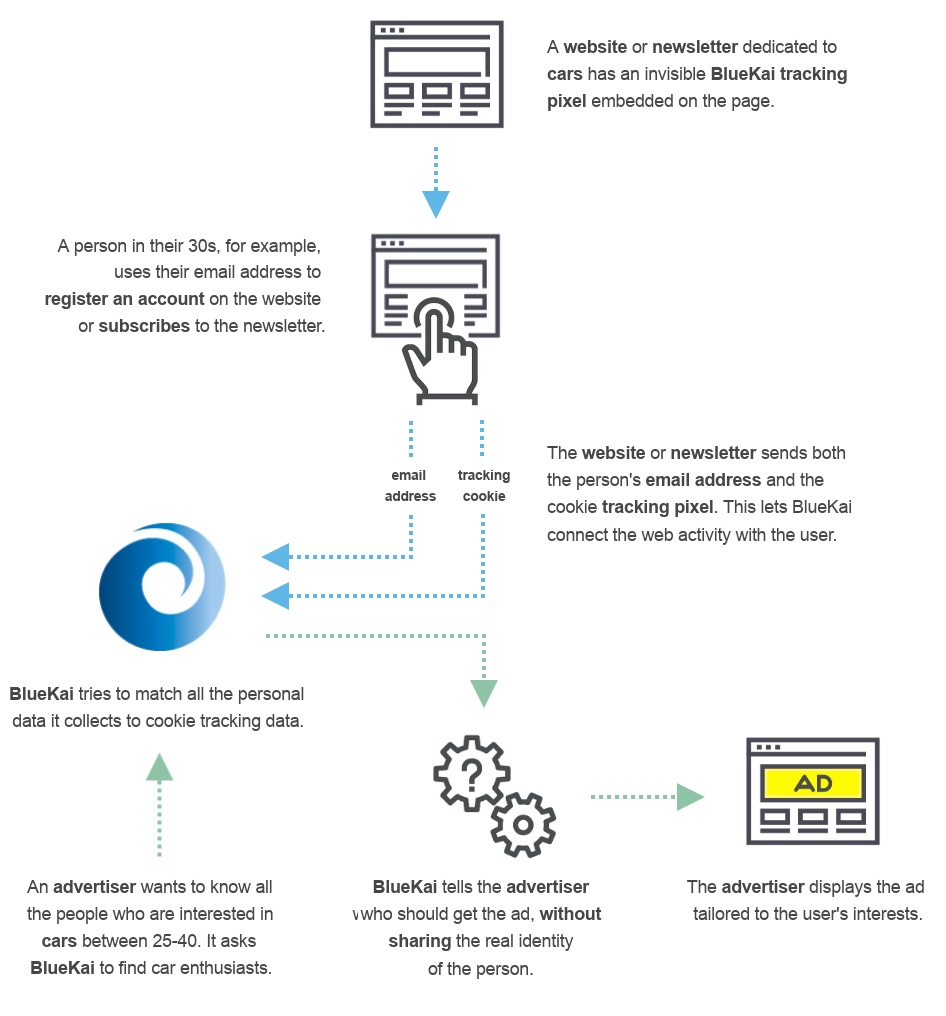 The technology is far from perfect. Harvard Business Review found earlier this year that the information collected by data brokers, such as Oracle, can vary wildly in quality.

But some of these platforms have proven alarmingly accurate.

In 2012, Target mailed maternity coupons to a high school student after an in-house analytics system figured out she was pregnant — before she had even told her parents — because of the data it collected from her web browsing.

Some might argue that’s precisely what these systems are designed to do.

Jonathan Mayer, a science professor at Princeton University, told TechCrunch that BlueKai is one of the leading systems for linking data.

“If you have the browser send an email address and a tracking cookie at the same time, that’s what you need to build that link,” he said.

The end goal: the more BlueKai collects, the more it can infer about you, making it easier to target you with ads that might entice you to that magic money-making click.

But marketers can’t just log in to BlueKai and download reams of personal information from its servers, one marketing professional told TechCrunch. The data is sanitized and masked so that marketers never see names, addresses or any other personal data.

As Mayer explained: BlueKai collects personal data; it doesn’t share it with marketers.

‘No telling how revealing’

Behind the scenes, BlueKai continuously ingests and matches as much raw personal data as it can against each person’s profile, constantly enriching that profile data to make sure it’s up to date and relevant.

But it was that raw data spilling out of the exposed database.

Another record revealed how one of the largest investment holding companies in Turkey used BlueKai to track users on its website. The record detailed how one person, who lives in Istanbul, ordered $899 worth of furniture online from a homeware store. We know because the record contained all of these details, including the buyer’s name, email address and the direct web address for the buyer’s order, no login needed.

We also reviewed a record detailing how one person unsubscribed from an email newsletter run by an electronics consumer, sent to his iCloud address. The record showed that the person may have been interested in a specific model of car dash-cam. We can even tell based on his user agent that his iPhone was out of date and needed a software update.

The more BlueKai collects, the more it can infer about you, making it easier to target you with ads that might entice you to that magic money-making click.

The data went back for months, according to Sen, who discovered the database. Some logs dated back to August 2019, he said.

“Fine-grained records of people’s web-browsing habits can reveal hobbies, political affiliation, income bracket, health conditions, sexual preferences, and — as evident here — gambling habits,” said the EFF’s Cyphers. “As we live more of our lives online, this kind of data accounts for a larger and larger portion of how we spend our time.”

Under California state law, companies like Oracle are required to publicly disclose data security incidents, but Oracle has not to date declared the lapse. When reached, a spokesperson for California’s attorney general’s office declined to say if Oracle had informed the office of the incident.

Under Europe’s General Data Protection Regulation, companies can face fines of up to 4% of their global annual turnover for flouting data protection and disclosure rules.

BlueKai is everywhere — even when you can’t see it.

One estimate says BlueKai tracks over 1% of all web traffic — an unfathomable amount of daily data collection — and tracks some of the world’s biggest websites: Amazon, ESPN, Forbes, Glassdoor, Healthline, Levi’s, MSN.com, Rotten Tomatoes, and The New York Times. Even this very article has a BlueKai tracker because our parent company, Verizon Media, is a BlueKai partner.

But BlueKai is not alone. Nearly every website you visit contains some form of invisible tracking code that watches you as you traverse the internet.

As invasive as it is that invisible trackers are feeding your web browsing data to a gigantic database in the cloud, it’s that very same data that has kept the internet largely free for so long.

To stay free, websites use advertising to generate revenue. The more targeted the advertising, the better the revenue is supposed to be.

While the majority of web users are not naive enough to think that internet tracking does not exist, few outside marketing circles understand how much data is collected and what is done with it.

Take the Equifax data breach in 2017, which brought scathing criticism from lawmakers after it collected millions of consumers’ data without their explicit consent. Equifax, like BlueKai, relies on consumers skipping over the lengthy privacy policies that govern how websites track them.

In any case, consumers have little choice but to accept the terms. Be tracked or leave the site. That’s the trade-off with a free internet.

But there are dangers with collecting web-tracking data on millions of people.

“Whenever databases like this exist, there’s always a risk the data will end up in the wrong hands and in a position to hurt someone,” said Cyphers.

Cyphers said the data, if in the hands of someone malicious, could contribute to identity theft, phishing or stalking.

“It also makes a valuable target for law enforcement and government agencies who want to piggyback on the data gathering that Oracle already does,” he said.

Even when the data stays where it’s intended, Cyphers said these vast databases enable “manipulative advertising for things like political issues or exploitative services, and it allows marketers to tailor their messages to specific vulnerable populations,” he said.

“Everyone has different things they want to keep private, and different people they want to keep them private from,” said Cyphers. “When companies collect raw web browsing or purchase data, thousands of little details about real people’s lives get scooped up along the way.”

“Each one of those little details has the potential to put somebody at risk,” he said.