Facebook removed a cluster of incendiary Trump campaign ads Thursday for violating its rules against hate group imagery. The campaign’s ads attacked antifa, the decentralized anti-fascist movement and a frequent target of the president’s ire, with imagery of an upside-down red triangle — a well-documented symbol worn by political prisoners held in Nazi concentration camps. 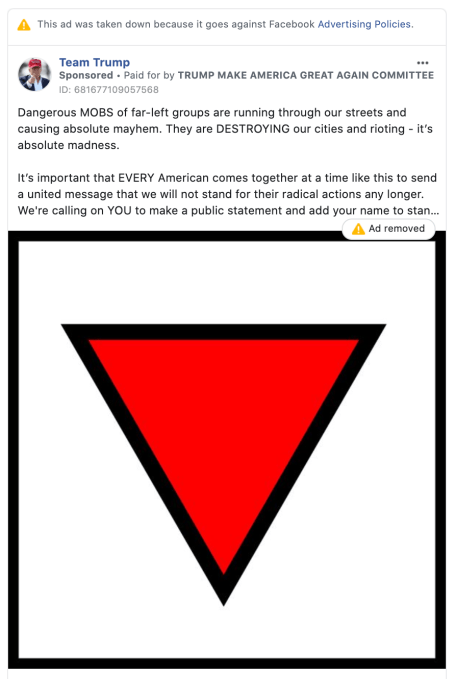 The Trump campaign responded to criticisms from progressive watchdog Media Matters for America on Twitter, claiming that the symbol is both an emoji and “a symbol widely used by Antifa.” While the red triangle symbol is indeed an emoji, the latter claim isn’t true. Antifa’s far more common symbols include three downward arrows and a red and black flag.

“It is not in the ADL’s Hate Symbols Database,” the campaign tweeted.

This is an emoji.🔻

It's also a symbol widely used by Antifa. It was used in an ad about Antifa.

It is not in the ADL's Hate Symbols Database. pic.twitter.com/V4fK8QWHKD

Facebook appears to disagree. “We removed these posts and ads for violating our policy against organized hate,” a Facebook spokesperson said in a statement provided to TechCrunch. “Our policy prohibits using a banned hate group’s symbol to identify political prisoners without the context that condemns or discusses the symbol.”

Facebook took down both the ads and the campaign’s organic posts containing the symbol, citing its policy against symbols associated with hate organizations.