Co-founder Sebastian Scheele says that his company’s Kubernetes solution can provision clusters and applications on any cloud, as well as in a data center running, for example, OpenStack or VMware. What’s more, it can do it much faster by automating much of the operations side of running Kubernetes clusters.

“We wanted to really have a cloud native way to run and manage Kubernetes. And so it’s running the Kubernetes master itself, which is completely containerized on top of Kubernetes, rather than being run on VMs. This helps provide you with better scalability, but also because it’s running on Kubernetes, we get all of the resilience and auto scaling out of Kubernetes itself,” Scheele told TechCrunch.

He says that he and his co-founder Julian Hansert have always had a strong commitment to open source, and offering Kubermatic platform under the Apache 2.0 license is a way to show that to the community. “One of the big [things] we can bring to the table is making Kubermatic completely open source, while following the Open-core model, and having a strong commitment to open source to the world and also to the community,” he said. 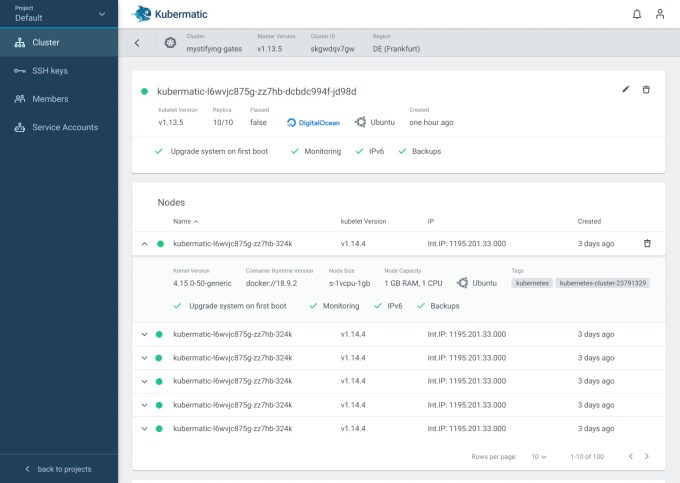 As for why it’s rebranding, he says that the original company name is a German word that means navigation pilot for a ship. The name is a nod to its Hamburg base, which is a hub for container ships. It makes sense to Germans, but not others, so they wanted a name that more broadly reflected what the company does.

“Now that we are open-sourcing Kubermatic, we also thought that people should understand our vision and what’s our DNA. It’s Kubernetes automation, helping our customers to really save money on Kubernetes operations by automating as much as possible on the operation level, so our users can really focus on building new applications,” he explained.

The company launched four years ago and has taken no funding, completely bootstrapping along the way. It’s worth noting it was one of the top five committers to the open-source Kubernetes project in 2019, along with much bigger names including Google, VMware, Red Hat and Microsoft.

Today the company has 50 employees, most of whom are working remotely by choice, rather than due to the pandemic. In fact, the company has employees working in 10 different countries. He says that has allowed him to work with people with a broad set of skills, who don’t necessarily live in Hamburg where he and Hansert are based.