We knew remotely operated robotics were going to have their moment soon enough — but few predicted how much the category would be forced to accelerate in 2020. It’s true that many of the pieces were already in place, including the technology and the desire to innovate, but a global pandemic turned out to be the secret sauce here. Anything companies can do to remove potential human contamination from the process is going to move to the top of the list.

The timing is certainly perfect for Bay Area-based Freedom Robotics. Back in July of last year, the startup announced a $6.6 million raise. More recently, co-founder and CEO Joshua Wilson joined myself and Nvidia’s Claire Delaunay onstage at TechCrunch’s robotics event in March. Off-stage, Wilson showed me software Freedom had been developing: a solution designed to make remote operation a plug and play process for robotics companies.

Freedom Robotics raises $6.6M to take the hassle out of founding a robotics startup 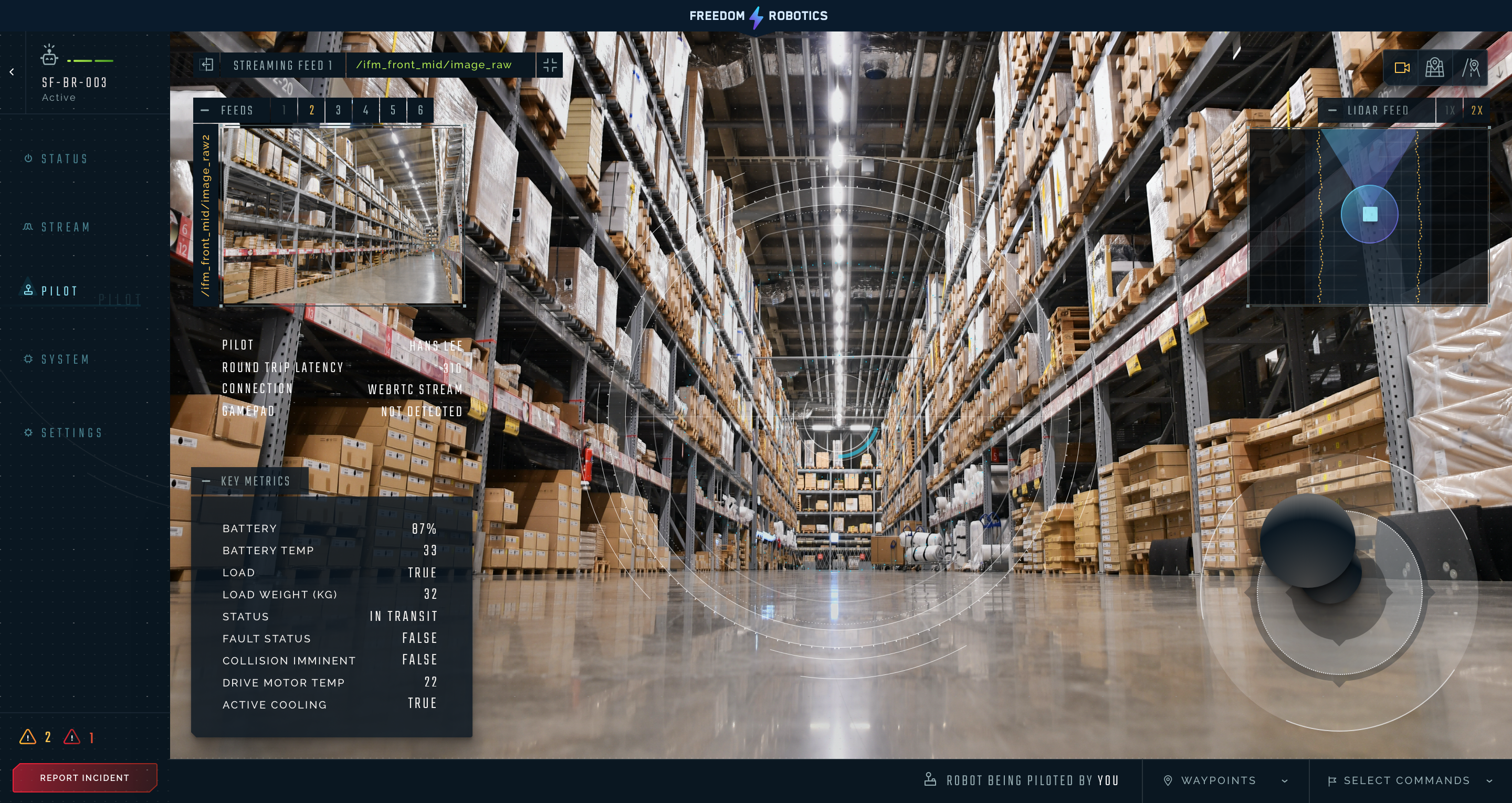 That software was Pilot. The company is finally ready to discuss it in full, just as many companies are getting really serious about remote operations. The secret sauce here is simplicity, allowing for a wide range of different robotics form factors to create remote operations on various devices, including smartphones, laptops and tablets. Freedom says they’ll be able to do it with a single line of code. What’s more, inexperienced operators should be able to control the robots almost instantly.

“COVID has accelerated robotics deployments by five years, co-founder and CTO Hans Lee tells TechCrunch. “People need robots today and our robotics customers can’t keep up with the demand to build them. We are seeing a ton of longer-term robotics platforms in development pivot to launching in less than 60 days with a significantly simpler system and with humans in the loop. It has really reinforced the value of our Pilot feature and we are excited to be helping make hospitals, streets, agriculture and other areas significantly safer during COVID.”

A number of robotics companies are already utilizing the tech, including Bangalore’s Invento Robotics and UCLA spin-off Cyan Robotics. Along with teleoperations, the company is pitching the technology as a stepping stone toward full autonomy. Key applications at the moment are delivery and warehouse robotics, both of which are in high-demand during the pandemic.

“Commercial cleaning robots are now narrowly targeted at sanitizing. In agriculture – vegetable and fruit picking labor shortages have become national news – there is limited time until harvest,” Freedom’s head of robotics Steve Hansen tells TechCrunch. “What we’re seeing is people who previously had longer, more elaborate plans to build out automation systems are coming to us looking to ship their robots quicker with remote teleoperators as a backstop and are in need of dev tools they can use to tune and fix their robots literally in the fields.” 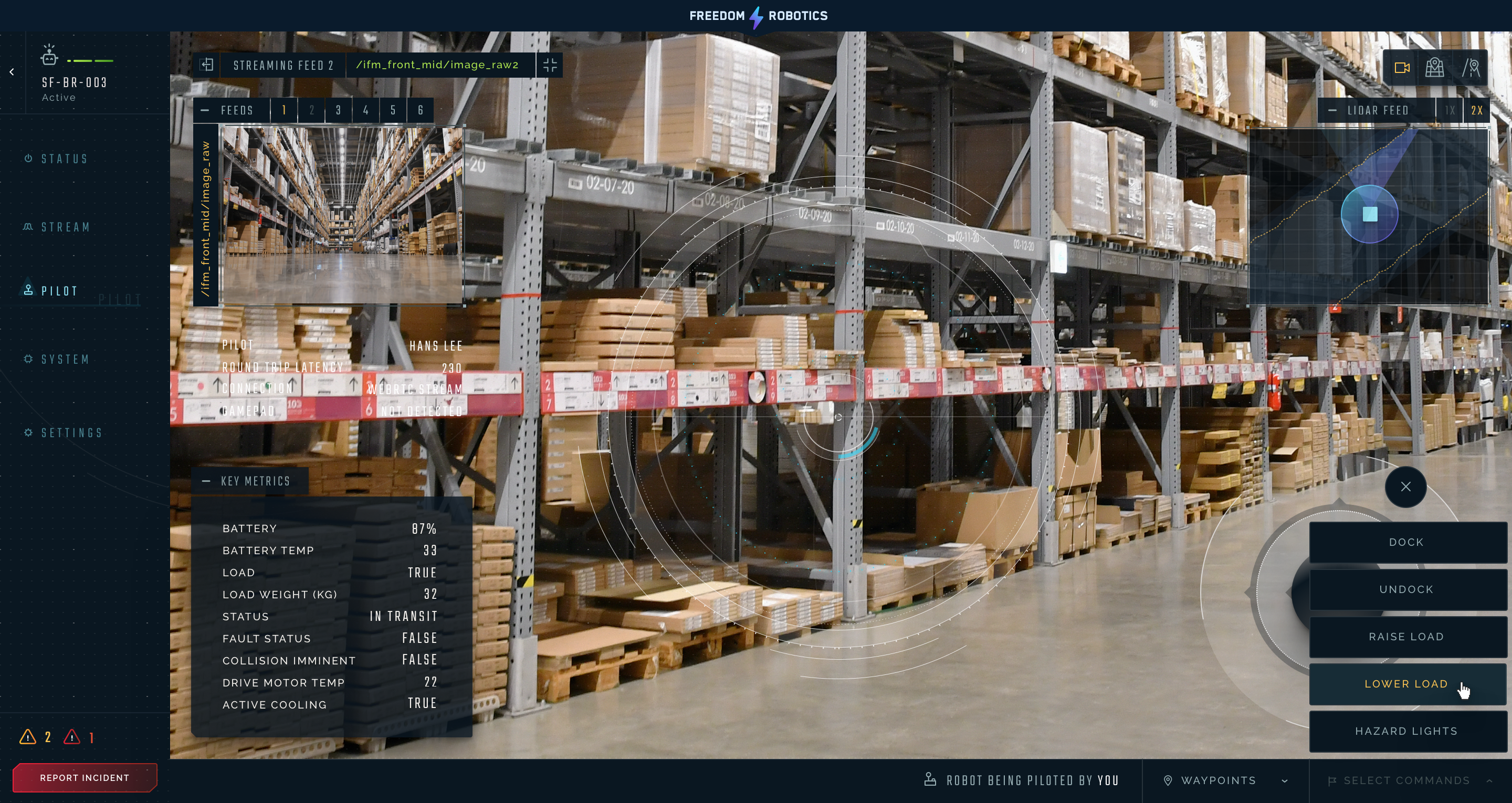 “Pilot features allow you to ship these robots now and fill in the gaps of bugs and missing features with human operators as you scale each deployment,” Freedom writes. “You can also supplement your autonomous capabilities with a human backstop to make tough decisions and add in human-level intelligence before algorithms are fully tuned. By rethinking things to include remote human operators in the mix, you can be on the fastest path to a fully autonomous system that meets your customers’ needs and also positively impacts the world.”

Freedom is currently offering free trial accounts for Pilot that includes one year for one robot. There’s a tiered pricing structure beyond that.