Both companies focus on account-based marketing (ABM), an approach where marketing and sales coordinate their outreach to specific, high-value accounts. Engagio co-founder and CEO Jon Miller (who previously co-founded Marketo) told me, “Most people who aren’t super close to the category would have said we’re competitors.”

Instead, Miller said that Demandbase and Engagio have more than 30 shared customers. Similarly, Demandbase CEO Gabe Rogol described the companies as having “very much had a complementary partner strategy with each other.”

More specifically, Rogol said Demandbase’s strength is in helping marketers take advantage of third-party data, whereas Engagio was more focused on helping them utilize their own first-party data.

The financial terms were not disclosed — Engagio had previously raised $32.5 million, according to Crunchbase, while Demandbase raised $158 million. As a result of the acquisition, Miller will become chief product officer at Demandbase, while his co-founder Brian Babcock becomes chief technology officer. 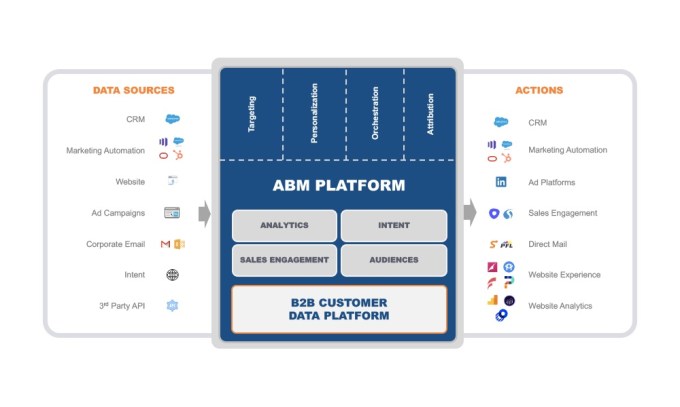 Rogol acknowledged that it’s going to be an “incredible challenge” bringing the two teams together during the pandemic, with everyone working from home and large gatherings in traditional offices currently off the table. However, he said that unifying the companies and the technology will be “our strategic initiative for the second half of the year.”

Meanwhile, Miller argued that the pandemic hasn’t eliminated the need for what Demandbase and Engagio are offering. In fact, he suggested that where marketers may have previously seen the shift to ABM as something they could deal with later, their plans have accelerated: “It’s a now priority, because I [as a marketer] still have to create revenue.”

Rogol added that Demandbase “crushed” its advertising goals during its first quarter.

“We’re really confident that this will define what’s been a fragmented ABM market,” he said. “The market needs clarity here.”