Update. Twitter says this is related to a test but for emoji reactions to quote Tweets, and it came from a test last year even. The test is a sign of one more step to adding more reactions for users in the public timeline, but not quite the reactions we hoped they would be. (Original story follows below.)

When it comes to Twitter tweaks, the focus in the last several months seems to have been more on working on ways to make its platform less prone to being abused by people who use it to spread false and misleading information and harassment, and generally weaponise it for aims that are ultimately harmful. But a recent test points to how the company is also working on other ways of improving interactions and engagement.

Twitter appears to be currently testing reactions in Tweets, which would expand the hearts you already have on there to a range of other options. In the test, first uncovered by social app sleuth Jane Manchun Wong, Twitter is testing letting users respond with an emoji of their choice (similar to the pop-up it has for emojis when you compose a Tweet today); or a few pre-selected ones, including “100” (for agreement), a red circle with a line through it (for disagreement), a heart, a crying with laughter emoji, a shocked face and a pair of pressed palms (for please, yes, let it be so, etc.). 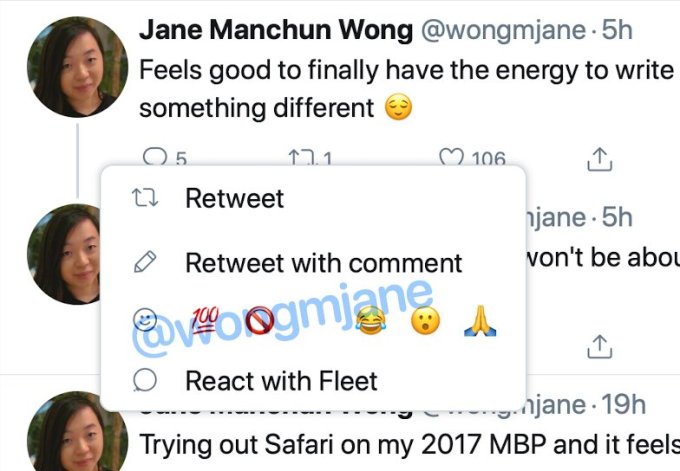 In the test, Twitter also includes Fleets as a reaction in addition to these instant responses, alongside existing Retweets and Retweets with comment. (Fleets are Twitter’s version of Stories and so far are only live in Brazil, Italy and, most recently, India.)

We reached out to Twitter for comment on this hours ago. We will update when and if they respond.

Reactions in Tweets should not come as too much of a surprise. In January, Twitter started to lay the groundwork by adding in reactions to Direct Messages. Based on the reactions you typically see in Apple’s iMessages, however, they’re different from the reactions appearing in this latest test. (They include thumbs up and down, a flame, a heart and laughing/crying/shocked faces.)

On top of that, Twitter itself has been testing the waters for multiple-emoji reactions for no less than five years already — which, even for a company that perhaps hasn’t been quick enough to respond to requests for changes, is a long time in tech. Maybe there’s still hope for that edit button, after all.

Offering a choice of quick-response reactions for users would (finally) bring Twitter in line with other social media platforms, specifically Facebook but also others like LinkedIn, with the expanded range of reactions giving users a way of responding quickly but with a little more nuance thrown in. Engagement is king these days, so something that can bring out more clicks but not at the expense of festering more abuse seems like a positive.

Some superfans never really forgave Twitter for dropping “stars” in favour of “hearts.” One big complaint: it co-opted quick acknowledgement and effectively turned it into heart-felt endorsement.

I always thought that replacing a star with a heart was Twitter’s attempt to put more positivity into the platform. Yes, there are people who argue that hearts are equally used for acknowledgement as for actual positive responses, but that sort of ham-fisted response probably sums up exactly why Twitter’s hammer of attention precisely falls the wrong way so often.