Last week, Google postponed its Android 11 event, because, as the company rightly noted, “now is not the time to celebrate.” Today, however, it went ahead and launched both the first beta of Android 11 and provided updates about a slew of tools that should make developing for Android a bit easier for developers. It’s not holding a splashy celebration with live keynotes, though. Instead, the company posted a set of videos, a blog post and updated sites for the various features.

“We have cancelled the virtual launch event to allow people to focus on important discussions around racial justice in the United States,” Google says in today’s blog post. “Instead, we are releasing the Android 11 Beta today in a much different form, via short-form videos and web pages that you can consume at your own pace when the time is right for you.”

When I talked to Android director Stephanie Cuthbertson, she specifically highlighted wireless debugging over ADB with Android 11 in Android Studio as a major time saver for developers (and that’s something developers have asked for for a very long time). Also new is that the Android Emulator — which itself has seen quite a few performance enhancements in recent iterations — is now hosted directly inside the IDE, and developers can now also run on-device tests side-by-side to speed up their workflow.

The team also did quite a bit of work on making the overall build and deployment processes fast, in large part thanks to smartly using caching in Gradle, the build tool Android Studio uses, and native Kotlin annotation processing — and it’s worth remembering that Kotlin is now essentially the preferred language for Android development, so that’s where Google is putting a lot of its resources even as it continues to support Java. 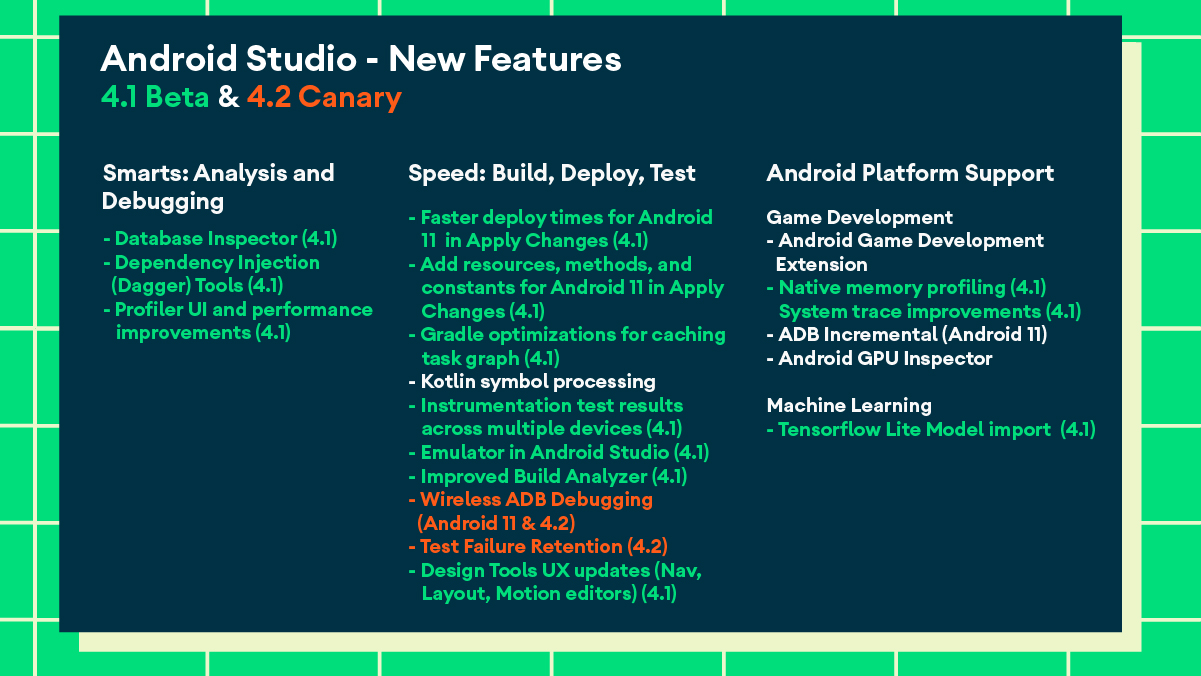 No developer announcement would be complete without some machine learning part, so Google also today announced that developers can now import their ML Kit and TensorFlow Lite models directly in the IDE.

For game developers, Google is introducing a new user interface for its performance profilers and more.

It’s been a while since Google announced Jetpack Compose, its new UI toolkit for Android, and while it’s still not quite ready for production usage, today’s update sees the introduction of Jetpack Compose Developer Preview 2, with new features like animations, constraint layouts and more. Don’t get too excited yet, though, as Google’s current plan is to release an alpha of Compose this summer and a 1.0 next year.

Today, about 70% of the top 1,000 apps in the Google Play store use the Kotlin language. With today’s update — and Kotlin 1.4 — Google now supports Kotlin coroutines, which make writing concurrent calls a lot easier. Google is now making coroutines an official recommendation, and some of its own Jetpack libraries already use this technology.

On the Google Play side, the company is launching a redesigned Google Play Console today. In addition to the new design, which Google promises will make the console “clearer and easier to use,” there are also now features to help you understand your performance insights better, get guidance on policy changes, and more.