What can I say? It’s a Bentley. It’s lovely.

The Bentley new Flying Spur is a luxury super sedan. It packs a larger engine than most sports cars, has four heavenly seats and glides over the road like soap on a shower floor. This example costs $279,000, so I would expect nothing less.

This sedan is supremely comfortable, and yet it packs a powerful punch. Bentley says the W12 engine lets it hit 207 mph though I had no reason to verify that claim. Going fast means arriving at a destination sooner and, during my week with the new Flying Spur, I never wanted the ride to end.

The new Flying Spur builds on a long history of Bentley sedans. In Bentley’s four-car lineup, the Flying Spur sits under the palatial Mulsanne saloon as a more affordable, driver-focused sedan. It’s a bit smaller, a tad more subdued, yet still spectacular.

Down to the crystal hood ornament, everything about the Flying Spur is focused on creating a luxury experience. The rear seat headrest pillows are softer and more supportive than the ones on my bed. The massaging seats hit all the right spots. The audio is surprising with pounding bass and clear highs.

There’s a twist: Most of the new Flying Spur’s creature comforts are available in lesser cars. Massaging seats, supple materials and incredible driving dynamics for a large sedan — all things that can be had, in a way, in a Cadillac for $80,000 or a Mercedes for $150,000. And I’ve driven those cars. They’re great, but the Flying Spur does everything just a tick better. Enough to justify the much-higher price? I’m not here to judge how you spend your money. 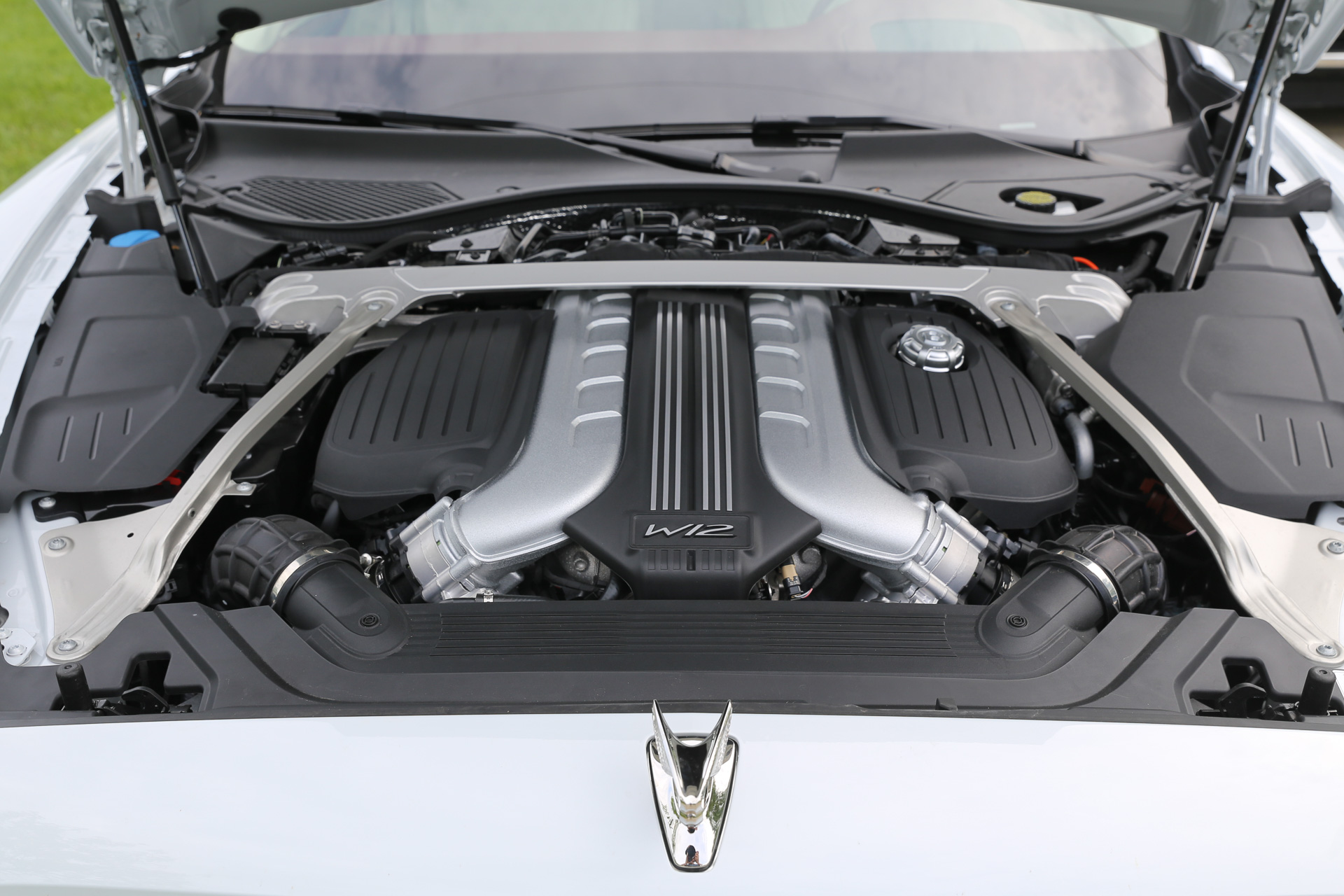 Come for the luxury, stay for the performance

The Flying Spur glides across the road with supreme confidence. Bentley stuffed its W12 engine under the bonnet, and it provides ample power for cruising. With 626 HP and 663 ft-lb of torque on tap, power is nearly bottomless, and that’s what’s needed to move the imposing sedan. Like past models, this updated Flying Spur features all-wheel drive though it’s been reconfigured to make the vehicle more agile. Now, most of the power is sent to the rear wheels with the fronts mainly powered when the car detects rear slippage. The result is a sedan that dives into corners and haunches onto its back legs when ripping off a fast start.

At speed, the Flying Spur is in its element. It flies across the tarmac with silky shifts and incredible coasting abilities. Lift off the gas, and the Flying Spur seems to coast forever, seemingly propelled by extra momentum. In reality, Bentley is preforming mechanical magic, resulting in a luxury experience for both the driver and the passenger. It doesn’t take a skilled valet to make the Flying Spur a posh experience. Bentley’s worked out all the kinks and can make even aggressive driving comfortable.

Don’t sleep on the new Flying Spur. This car sprints to 60 mph in 3.7 seconds. There are faster cars, but few are as large as this Bentley. The stature makes the speed feel reassuring and impressive sound dampening isolates the riders from the violent drama happening a few feet in front of them in the engine. To be clear, the Flying Spur is fast though it never feels quick — and that’s a good thing. A quick head-snapping start cheapens the Bentley experience. 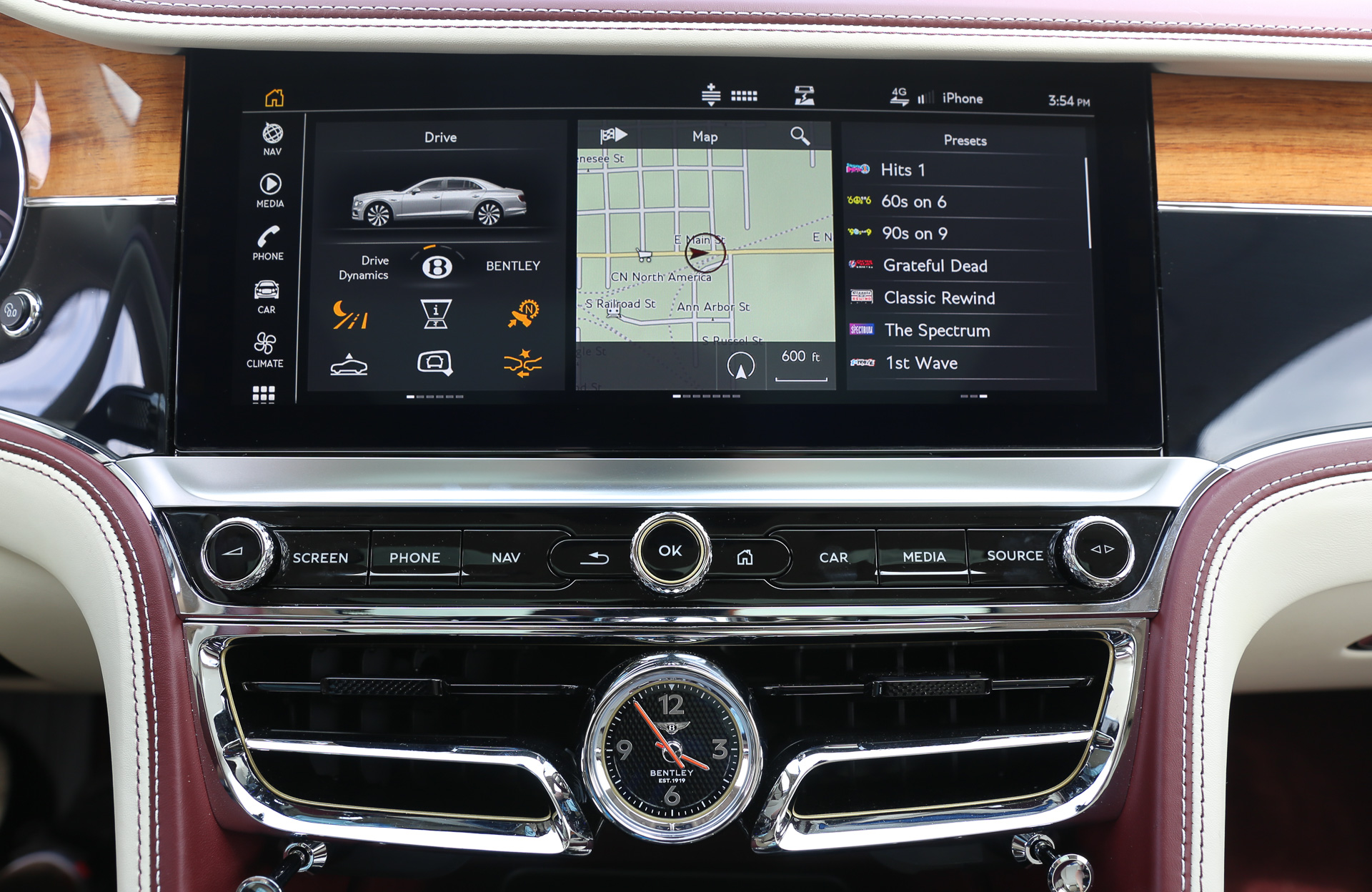 The interior is well-appointed and cavernous just as to be expected. The driver sinks into a seat with a commanding but comfortable position. Backseat passengers get the same treatment but gain a headrest as soft as any pillow found in a five-star hotel.

Mounted center mast is an infotainment screen that brings modern appointments to the sedan. The ultra-wide screen houses most of the user controls for the vehicle but feels a bit dated. Compared to other top-tier vehicles across Volkswagen’s brands (VW makes Bentley), this system lacks some forward-thinking features such as haptic feedback, in-air gestures and a refined design.

The screen impresses. With a touch of a button, the screen rotates backward, revealing three analog dials inlaid into the wood trim. It’s a classy bit of showmanship that hides the modern touch and restores a bit of the timeless elegance Bentleys are known for.

The inside of the Bentley Flying Spur feels familiar in a way. Aside from the swiveling infotainment system, the fit and trim could be that of any top-tier sedan from Audi, Mercedes or Lexus. Want an interior that truly stands apart? You’ll need to step up to the Bentley Mulsanne.

Backseat passengers get the same treatment as those sitting in the front with reclining rear seats, massagers and a touchscreen to control climate and media. Rear leg room is lacking for a large sedan, though. While the backseat is comfortable, large adults might feel more cramped than expected. The Flying Spur is not available in an extended wheelbase, either — at least not yet. Those sitting in the back get something exclusive over the front. The headrests pillows are sublime.

For around $279,000, the new Flying Spur’s price sits well above top sedans from BMW, Audi and Mercedes. It’s a hard sell on paper, too, as those automakers’ supersedans share a lot of the same performance stats and luxury appointments. In-person, the Flying Spur commands respect in a way different from its competitors. The Flying Spur has a timeless elegance that overshadows the underlying technology.

The Flying Spur offers an incredible experience for the driver and passenger alike. This isn’t always the case as some luxury cars tilt the experience to luxury or performance, and yet this Bentley sedan serves both well enough. The driver gets to pilot an impressive sports sedan capable of keeping up with most sports cars while passengers sit in complete comfort.