U.S. e-commerce sales will jump 18% this year due to the impact of the coronavirus pandemic that forced more shoppers online, according to a new forecast released today by eMarketer. However, the surge in new online orders won’t make up for the overall hit that the U.S. retail sector will take this year, the firm noted. The analysts estimate that total U.S. retail sales, which also includes auto and fuel, will drop by 10.5% in 2020 to $4.894 trillion — a level not seen since 2016.

“This is the sharpest consumer spending freeze in decades in the U.S.,” said eMarketer senior forecasting analyst Cindy Liu, in a report. ‘In just a couple weeks, as Americans sheltered in place, retail sales fell dramatically in March. With sales hitting their lowest point of the year in Q2, it will take years before consumer activity returns to normal levels,” she predicted. 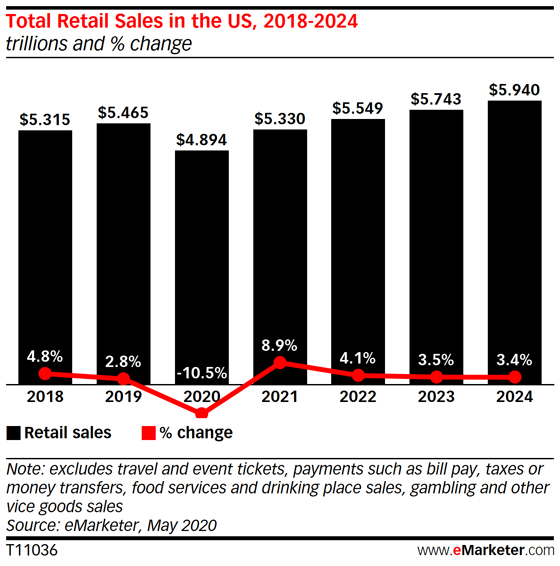 Physical retail is weighing down overall retail in the long term. This year, brick-and-mortar retail sales will fall by 14% to $4.184 trillion. And it may take up to five years for offline sales to return to prepandemic levels.

E-commerce hasn’t been strong enough to offset those losses — it’s only mitigating the severity of retail’s decline, the report said. In 2020, e-commerce sales will climb by 18% to reach $709.78 billion, representing 14.5% of total U.S. retail sales.

The report didn’t delve deeply into the contributing factors as to why overall retail sales will remain down despite stores reopening, but these would include the obvious impacts related to a coronavirus-triggered recession — like job losses and job insecurity, both of which prompt consumers to quell their spending. In addition, many consumers still continue to avoid brick-and-mortar retail entirely, instead only ordering their essentials online. Plus, with many consumers now working from home, apparel and accessories sales have taken a heavy hit.

The apparel and accessories category is typically the second-largest in e-commerce, for example, but will only grow 8.6% as consumers shift spending away from discretionary, non-essential purchases.

Meanwhile, other e-commerce categories including food and beverage and health/beauty/personal care are up by much more — the former by 58.5% and the latter by 32.4%. 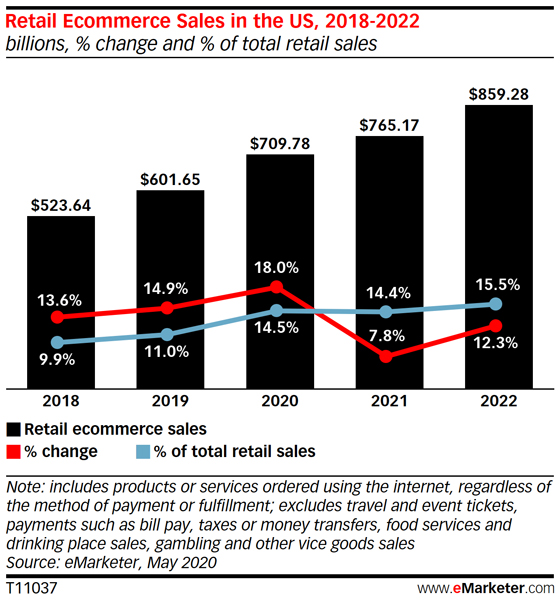 “Everything we’re seeing with e-commerce is unprecedented, with growth rates expected to surpass anything we’ve seen since the Great Recession,” said Andrew Lipsman, eMarketer principal analyst. “Certain e-commerce behaviors like online grocery shopping and click-and-collect have permanently catapulted three or four years into the future in just three or four months,” he added.

Target, Best Buy, The Home Depot and Costco will grow as well. 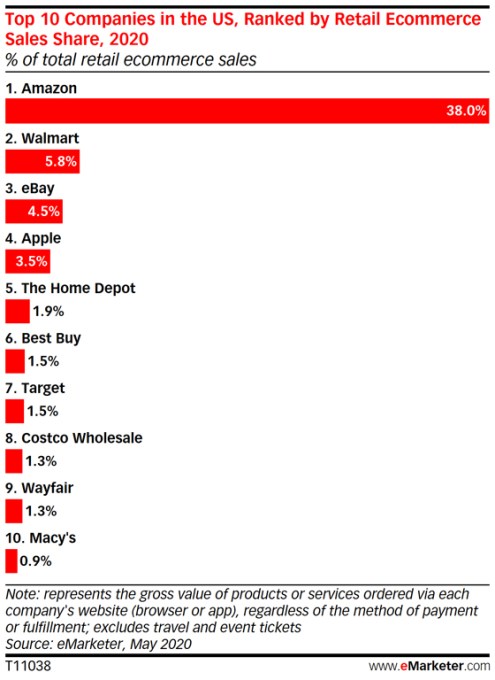 But Amazon, as expected, will outpace the lot.

“Amazon will increase its e-commerce market share to 38% and extend its reign of dominance,” Lipsman said.