Sonos has been releasing new hardware at a remarkably consistent and frequent pace the past couple of years, and what’s even more impressive is that these new releases are consistently excellent performers. The new Sonos Arc soundbar definitely fits that pattern, delivering the company’s best ever home theater sound device with performance that should convert even diehard 5.1 traditionalists.

The Sonos Arc is a soundbar that’s designed to integrate wirelessly with your Sonos home audio system, as well as accepting audio from your TV or A/V receiver via HDMI Audio Return Channel (ARC). Just about every modern TV should have at least one HDMI ARC port, and basically that just means that in addition to acting as a standard HDMI input for video sources, it can also offer audio output to a connected speaker or stereo system. 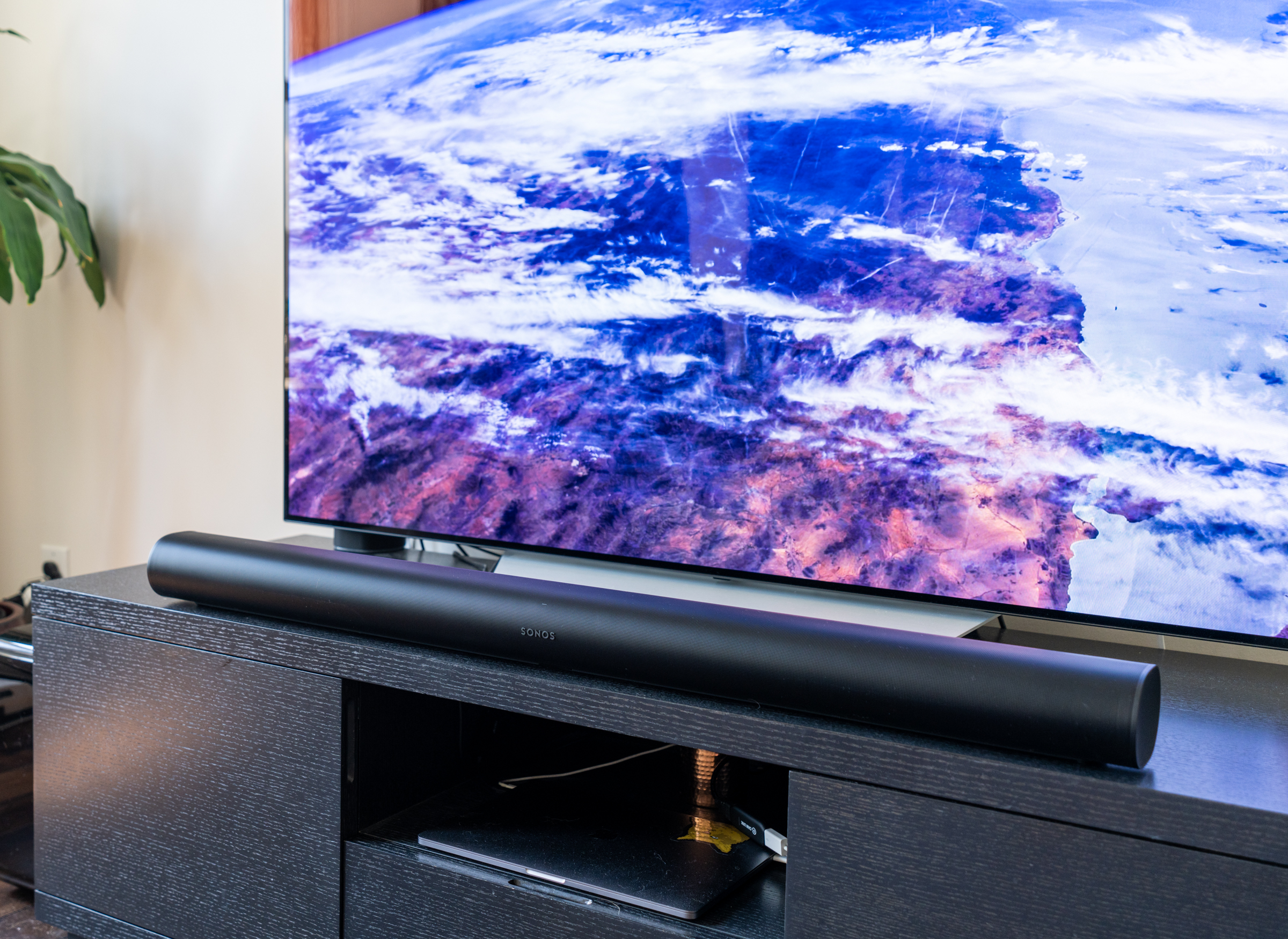 The Arc also comes with an HDMI to optical digital audio adapter in case your setup lacks ARC support (if a TV doesn’t have that, it almost surely has a TOSLINK digital audio output port) to cover all the bases. It also works as a wireless speaker that connects via Sonos’ dedicated mesh networking tech to other Sonos speakers you may have, so that it’s one more addressable multiroom speaker in a whole home wireless audio setup.

Arc can also be combined with other Sonos speakers, including the Sonos Sub, as well as Sonos One, One SL, Play:1 and others for setting up a more complete wireless 5.1 setup with a subwoofer and two rears. That’s an optional enhancement, however, and not necessary to take advantage of the Sonos Arc’s excellent virtual surround rendering, which with this new hardware also includes Dolby Atmos surround sound encoding for the first time on a Sonos soundbar.

The Sonos Arc really comes from the modern design pedigree that Sonos has put into its hardware releases since the debut of the Sonos One, which means monoblock coloring (in either black or white), smooth lines and rounded hole grill designs that look a lot more contemporary than the contrast color grills on the Play:1 for example.

Arc looks like a spiritual successor to the Sonos Beam, the first Sonos soundbar to feature a built-in mic and support for virtual voice assistants including Google Assistant and Amazon’s Alexa. But it’s also a lot larger than the Sonos Beam at 45″ long — much more like the Sonos Playbar and Playbase that marked the company’s entry into the category.

For a sense of how long it is, it runs almost the full length of my LG 65″ C7 OLED TV. It’s also a bit taller than the Sonos Beam, coming in at 3.4″. For my use, that was still short enough that it doesn’t obscure any of the TV’s display when it’s sitting on a TV bench in front of the television from my regular viewing angle, but your mileage may vary, and if you had a similar setup with the Beam, just note that you’ll need a bit more clearance with the Arc. 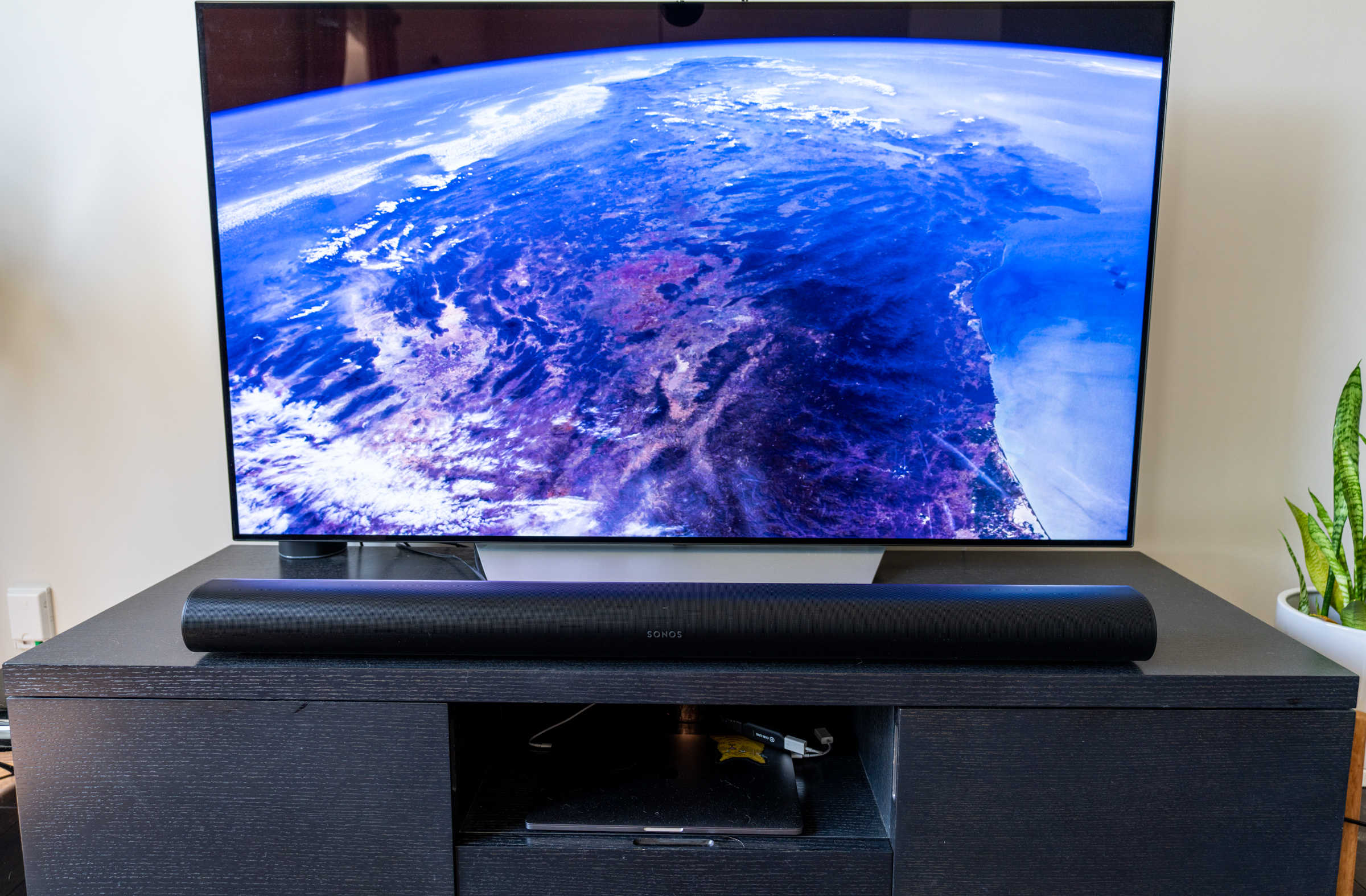 The larger size isn’t just for show — it helps Sonos deliver much better sound vs. the lower-priced Beam. Inside the Arc, there are 11 drivers, including two upward-facing ones, and two that face out either end of the long cylindrical soundbar. The end effect of all of these drivers, and the true distance separation that’s made possible by its long profile, is much more effective left/right/rear sound separation.

On the back, there’s a vent bar that provides additional sound quality improvements and holds the mounting outlets for attaching the Arc to a compatible wall mount. Either wall-mounted or resting atop furniture, the Arc is an attractive piece of hardware, and with just two cables required to run to power and the TV, it’s a minimal solution to home theater clutter that should mesh well with most home decor.

I mentioned this briefly above, but it’s amazing what the Sonos Arc can accomplish in terms of sound separation and virtual surround immersion with just a single speaker. It’s easily the best sound rendering I’ve experienced from a Sonos soundbar, and likely the best audio quality from a soundbar I’ve heard, period.

Stereo sound field testing shows that audio tracks really well left-to-right, and the Dolby Atmos support really shows its benefits when you have content that offers it. Speech intelligibility is also really fantastic on the soundbar alone, whereas with the Beam, I’ve found that it can suffer in some situations unless you have a Sonos Sub added to your system to take care of the low end frequencies and allow the soundbar to produce better clarity on the high end. 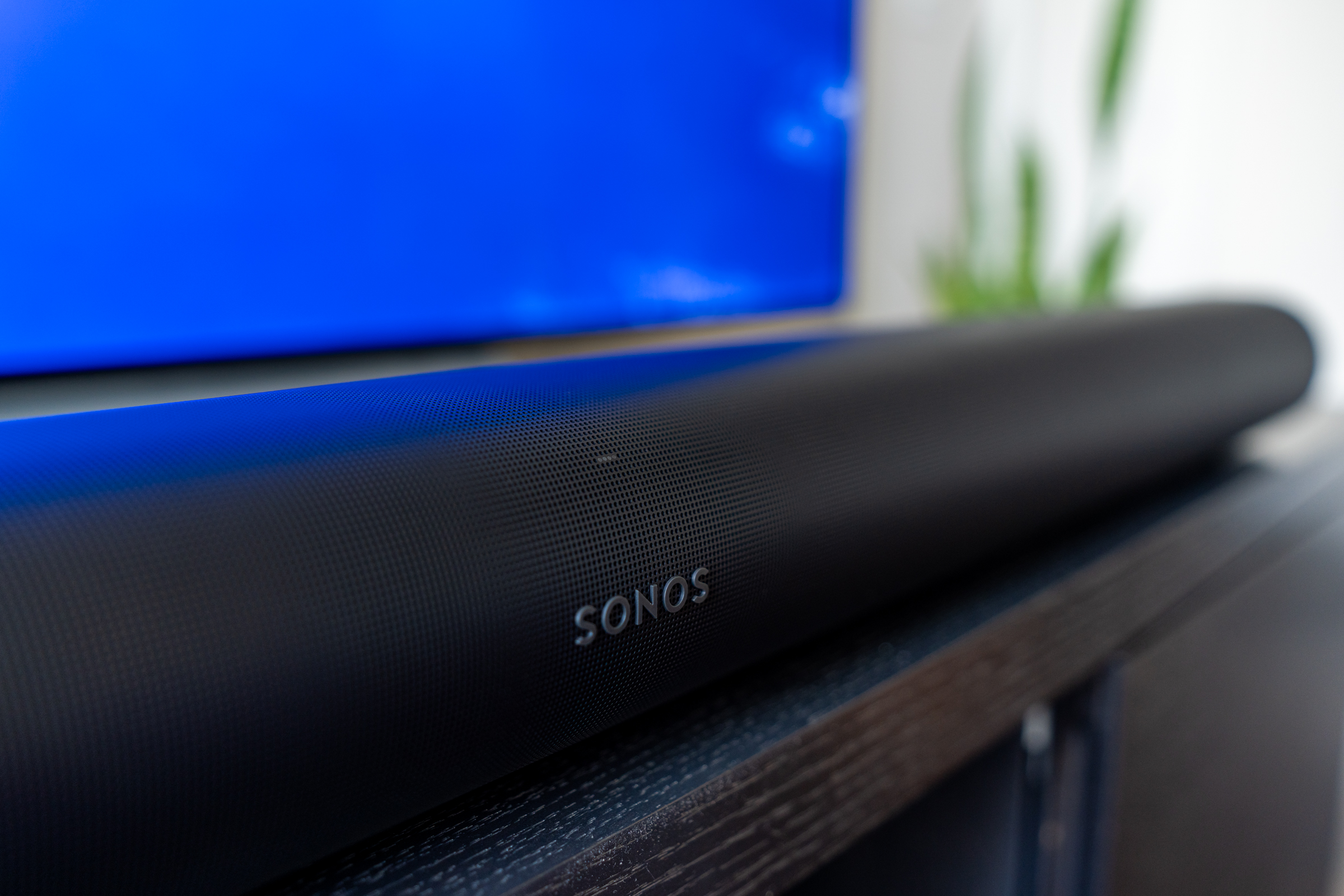 The Arc definitely benefits from pairing it with a Sonos Sub and other Sonos speakers acting as rears, but the soundbar on its own is a much better performer than anything Sonos has previously offered, in case you’re looking to save some money or you just want to focus on the most minimal sound setup possible that isn’t just terrible built-in TV speakers.

Sonos has also included a microphone on the Arc, which allows you to use it with either Alexa or Google Assistant to play music, turn on the TV and do plenty more. It’s a great feature that’s optional if you’d rather leave the mic off or not connect any assistants, but for me it’s perfectly suited to a device that essentially sits at the center of the living room experience. The mic seems very able to pick up commands even in a large room when you’re quite far away from it, so it could be the only voice-enabled smart speaker you require in even a large open-concept living/dining/kitchen space.

The Arc also acts as an Apple AirPlay 2 speaker out of the box. For minimalists, this is yet another selling point, since it means you can use it wirelessly with an Apple TV mounted to the back of your TV, for instance — ridding yourself of one more wire if you want. It’s also super easy to stream any music or audio from your phone to the Arc as a result, even without opening up the Sonos app.

Speaking of that app, the Sonos Arc is exclusively compatible with Sonos’ new, forthcoming mobile app, which arrives on June 8. This app will live alongside the existing one, which will continue to be available in order to support older, legacy Sonos hardware that won’t work with the more modern version.

This new Sonos app, which I used as a beta during the testing period for the Sonos Arc, is not as dramatic a change as I was expecting. The app definitely offers a better, cleaner and more modern interface, but everything is still located pretty much where you’d expect it to be if you were a user of the existing version. Most of the changes are probably happening under the hood, where the app is presumably designed to work with the more modern chipsets, higher memory and updated wireless technology of more recently released Sonos speakers and accessories. 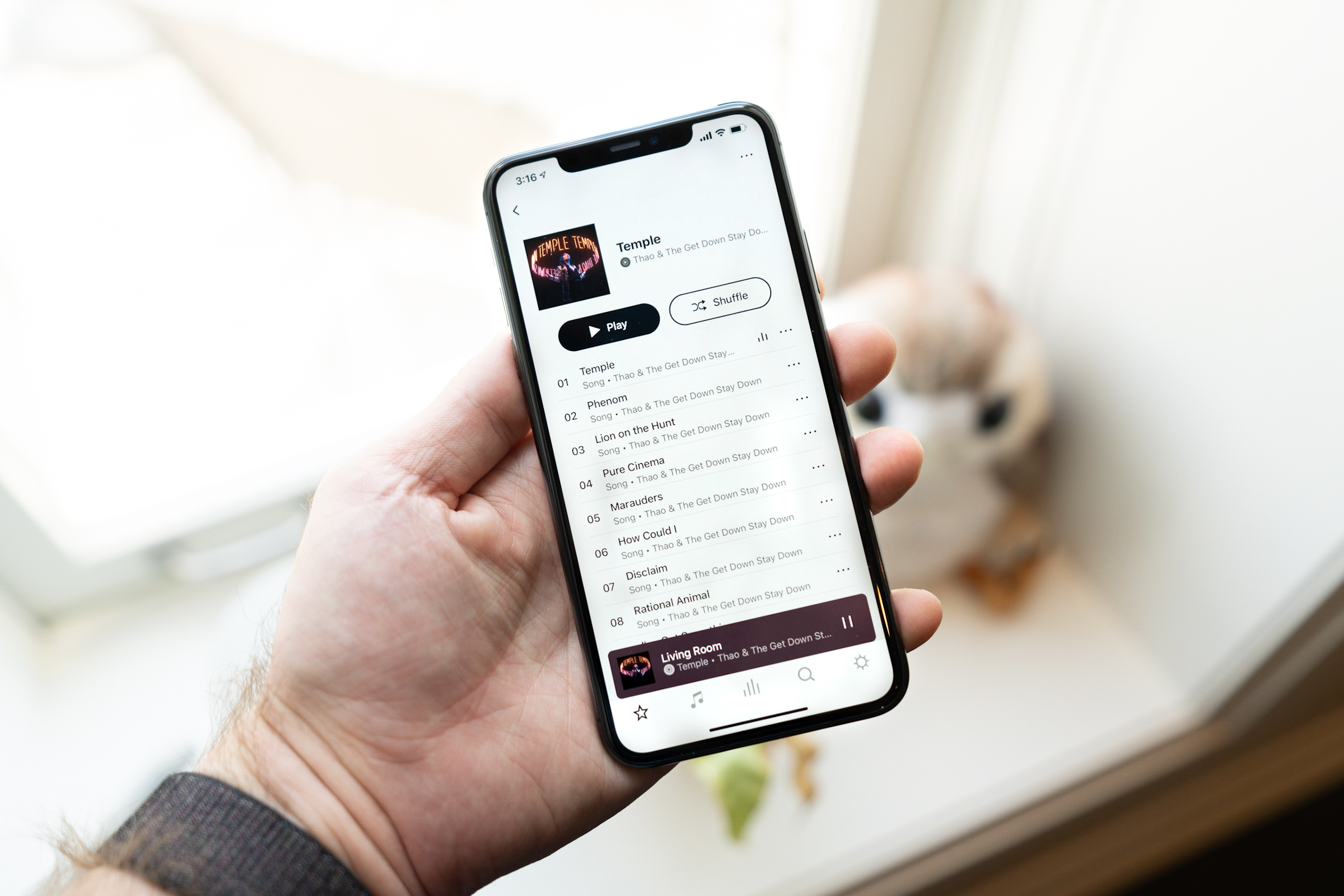 Long story short, the new app is a pleasant, fresh take on a familiar control system that seems both more performant and aesthetically better suited to modern Sonos speakers like the Arc. Even in beta, it didn’t give me any problems during my two weeks testing the Arc, and worked perfectly with all my services and voice assistants.

The Sonos Arc is definitely a premium soundbar, with a $799 price tag and great audio quality to match. It’s a fantastic successor to the Playbar and Playbase that exceeds both of those in every regard, and a great companion to the Beam, which means Sonos’ home theater lineup now offers excellent options for a range of budgets.

If you want the best, most versatile and well-designed wireless soundbar available, the Sonos Arc is the speaker for you.