The significant increases in TV watching and streaming services that were seen during the COVID-19 lockdowns in the U.S. may represent the new normal, new data from Nielsen suggests. During the height of the lockdowns, the weekly time spent watching connected TVs grew alongside overall media use, rising by over a billion hours in the passing weeks. But now that government restrictions and shelter-in-place orders are lifting, connected TV usage continues to remain well above pre-COVID-19 normals, the firm has found.

Connected TVs, which include things like smart TVs, internet-connected devices, and even game consoles, allow users to access a variety of entertainment beyond traditional broadcast or cable channels. They also offer access to sources of over-the-top content, streaming apps, games, and other subscription video services. Because of this wealth of content, connected TV usage grew during the pandemic while traditional TV usage in early May still hadn’t grown much over 2019 levels.

As of March 2020, 76% of U.S. homes had at least one connected TV, Nielsen data found. But that doesn’t necessarily correlate to usage. In January 2020, those homes with connected devices streamed a collective 12.5 billion of hours per month.

Shortly after COVID-19 spread in the U.S., that usage grew. The total number of hours spent with the devices was up 81% year-over-year, equating to an increase of nearly 4 billion hours of connected TV use per week.

Specifically, usage of the devices grew in the living room as families spent more time watching together, with “co-viewing,” as it’s called, growing to account for 62.5% of the share of minutes watched in early March to 64.1% by the end of the month. 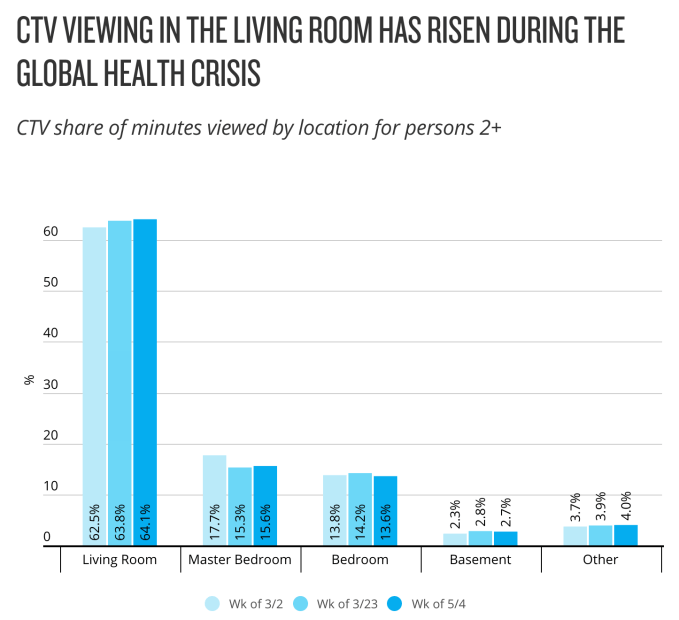 Outside of the connected TV space, co-viewing across broadcast, cable and syndicated TV also grew by 2 percentage points (from 34% to 36%) from early March to early May.

What’s most notable about the data, however, is that the trend towards increased connected TV viewing isn’t being significantly impacted by the lifting of government lockdowns. Although people have the option to leave their homes and go to more places, they’re still choosing to spend time indoors watching TV.

In the first week of March, connected TV households spent a combined 2.7 billion watching TV. That continued to grow as restrictions went into place, peaking at nearly 4 billion hours during the week of April 6-12, 2020, in the U.S. By early May, however, when stay-at-home orders lifted across numerous states, connected TV usage had only dropped to 3.5 billion hours per week — higher than before the lockdowns began. 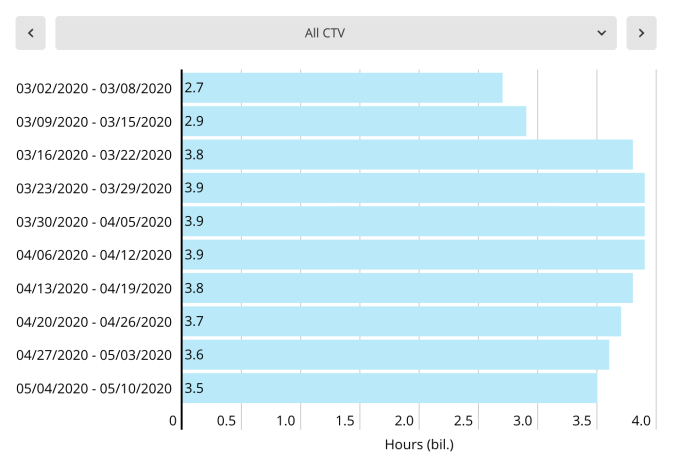 It may seem obvious that consumers would be more cautious about venturing out in the world when there’s no vaccine for COVID-19 and reported cases to continue to climb. But this is hard data that points to the potential longer-term impacts the pandemic will have on the way U.S. consumers behave.

“With 49 of the U.S. states now re-open at least partially, the continued high CTV usage is a testament to consumers’ attraction to the variety of options available and the connectivity they have to it,” said Nielsen. “So in this new normal, we see that connected TV and co-viewing are a big part of the new media consumption equation,” the firm said.