Automation is the name of the game in enterprise IT at the moment: We now have a plethora of solutions on the market to speed up your workflow, simplify a process and perform more repetitive tasks without humans getting involved. Now, a startup that is helping non-technical people get more directly involved in how to make automation work better for their tasks is announcing some funding to seize the opportunity.

Bryter — a no-code platform based in Berlin that lets workers in departments like accounting, legal, compliance and marketing who do not have any special technical or developer skills build tools like chatbots, trigger automated database and document actions and risk assessors — is today announcing that it has raised $16 million. This is a Series A round being co-led by Accel and Dawn Capital, with Notion Capital and Chalfen Ventures also participating.

The funding comes less than a year after Bryter raised a seed round — $6 million in November 2019 — and it was oversubscribed, with term sheets coming in from many of the bigger VCs in Europe and the U.S. With this funding, the company has now raised around $25 million, and while the valuation is considerably up on the last round, Bryter is not disclosing what it is.

Michael Grupp, the CEO who co-founded the company with Micha-Manuel Bues and Michael Hübl (pictured below), said that the whole Series A process took no more than a month to initiate and close, an impressive turnaround considering the chilling effect that the COVID-19 health pandemic has had on dealmaking. 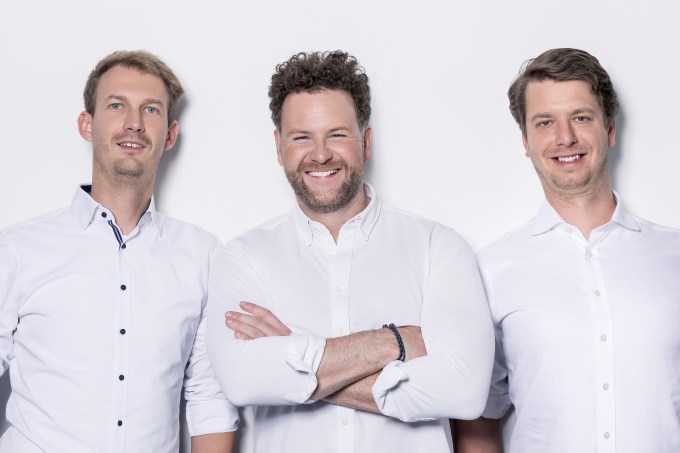 Part of the reason for the enthusiasm is because of the traction that Bryter has had since launching in 2018. Its 50 enterprise customers include the likes of McDonald’s, Telefónica, banks, healthcare and industrial companies, and professional services firms PwC, KPMG and Deloitte (who in turn use it for themselves as well as for clients). (Note: Because of its target users being large enterprises, the company doesn’t publish per-person pricing on its site as such.)

Bryter’s been seeing a lot of attention from customers and investors because its platform speaks to a big opportunity within the wider world of software today.

Enterprise IT has long been thought of as the less-fun end of technology: It’s all about getting work done, and a lot of the software used in a business environment is complex and often requires technical knowledge to implement, use, fix and adapt in any way.

This may still the case for a lot of it, especially for the most sophisticated tools, but at the same time we have seen a lot of “consumerization” come into IT, where user-friendly hardware and software built for consumers — specifically non-technical consumers — either inspires new enterprise services, or are simply directly imported into the workplace environment.

No-code software — like automation, another big trend in enterprise IT right now — plays a big role in how enterprise tools are becoming more user-friendly. One of the biggest roadblocks in a lot of office environments is that when workers identify things that don’t work, or could work much better than they do, they need to file tickets and get IT teams — also often overworked — to do the fixing for them. No-code platforms can help circumvent some of that work — so long as the roadblock of IT approves the use, that is.

Bryter’s conception and existence comes out of the no-code trend. It plays on the same ideas as IFTTT or Zapier but is very firmly aimed at users who might use pieces of enterprise software as part of their jobs, but have never had to delve into figuring out how they actually work.

There are already a lot of “low-code” (minimal coding) and other no-code platforms on the market today for business (not consumer) use cases. They include Blender.io, Zapier, Tray.io (a London-founded startup that itself raised a big round last autumn), n8n (also German, backed by Sequoia), and also biggies like MuleSoft (acquired by Salesforce in 2018 at a $6.5 billion valuation).

Bryter’s contention is that many of these actually need more technical know-how than they initially claim. Grupp pointed out that the earliest automation tools for enterprise have been around for decades at this point, but even most of the very modern descendants of those “will require some coding.” Bryter’s toolbox essentially lets users create dialogues with users — which they can program based on the expertise that they will have in their particular fields — which then sources data they can then plug into other software via the Bryter platform in order to “perform” different tasks more quickly.

Grupp’s contention is that while these kinds of tools have long been used, they will be in even more demand going forward.

“After COVID-19, workers will be even more distributed,” he said. “Teams and individuals will need to access information in a faster way, and the only way for big organizations to distribute that knowledge is through more digital tools.” The idea is that Bryter can essentially help bridge those gaps in a more efficient way.

Bryter’s target user and its approach underscores why investors like Accel see accessible, no-code solutions as a big opportunity.

“No-code software is really reducing the barriers of adoption,” Luca Bocchio, a partner at Accel, said in an interview. “If people like you and I can use the software, then that means demand can multiply by big numbers.” That’s in contrast to a lot of enterprise software today, which is very limited in how it can grow, he added. “Plus, enterprises these days want to see more future visibility in terms of the products they adopt. They want to make sure something will stick around, and so they tend not to want to work with super young startups. But it’s happening for Bryter, and the is a testament to Bryter and to the market potential.”