Roku is expanding its free live, linear channel lineup that’s part of its free movies and TV hub, The Roku Channel. In the U.S., Roku customers will now be able to stream from more than 100 live channels, including those offering free access to news, sports, movies, TV, kids and family programming, lifestyle content and Spanish-language programming. Along with the expansion, Roku is also launching a new Live TV guide to make it easier to browse through its free content.

The update, which includes 40 new channels, would seem to position Roku as more of a direct challenger to rival free video streaming services, including Pluto TV and XUMO. The former was acquired by Viacom (now ViacomCBS) in 2019 for $340 million, while XUMO was bought by Comcast earlier this year for over $100 million.

But instead, Roku is working in partnership with those companies — its free live channels include content that’s powered by XUMO as well as Pluto TV.

Also among the new additions is a video news channel from Reuters.

Roku has been rapidly expanding The Roku Channel hub since its launch in September 2017. While it initially focused on offering a selection of free, ad-supported movies — similar to Vudu’s “Movies on Us” or TUBI, for example — it has grown to include a range of free content, including TV, news, sports and even live channels, as well as add-on premium subscriptions.

The hub makes Roku a top choice for cord-cutters, as it centralizes access to free streaming content. The ad-supported content, meanwhile, contributes to Roku’s bottom line. The company today generates more money from its platform business than its device sales. Even amid the pandemic, which saw advertisers pulling back, Roku booked $232.56 million in platform revenue in Q1, which includes ads and licensing fees, versus just $88.21 million in device sales.

Roku says the hub continues to grow substantially faster than its overall platform, with a greater than 100% increase in streaming hours year-over-year in Q1. 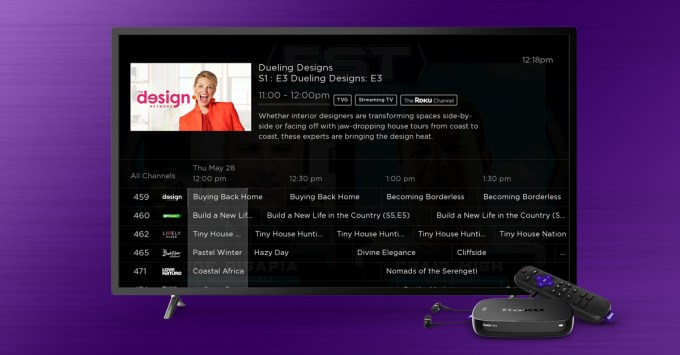 The launch of the Live TV Channel Guide will make accessing the expanded lineup channels easier, via a new “Live TV” tile on The Roku Channel. In addition, users can press left on their remote at any time to bring up the guide.

“Now more than ever it’s important for our users to have easy access to free content, such as news, and the ability to find it quickly,” said Ashley Hovey, Roku’s director of AVOD Growth, in a statement. “We’re excited to enhance the streaming experience through a Live Channel TV Guide and bring more free content from The Roku Channel to the forefront.”