“A drone is a camera,” Ani Acopian begins simply. “And it can fly. It’s basically a flying super-camera! I’d love to see more film and TV productions embrace the nimble and magical nature of drones and use them for more than bird’s eye view establishing shots.”

The director’s video for London-based record label AWAL (Artists Without a Label) unfolds like a minute-long homage to the narrative potential of UAVs. It lifts off from a desk, flies out a sliding-glass window, up over the room, down a stairwell and through a car. There’s a restaurant, some skaters in an empty pool, a parking lot junk yard and a backyard pool party. It’s a bright, sun-shiny picture of Southern California in a time before social distancing turned us all into nocturnal weirdos.

The sequence is stitched together to give the appearance on long shot. That’s particularly the work of some editing magic, which pulled together a still-impressive five shots to create the final product. The result comes in no small part due to the flying of Robert McIntosh. The pilot, who had previously collaborated with director Spike Jonze on the 2012 skate video “Pretty Sweet,” custom built the drone.

Weighing in at 120 grams, it was built by removing the camera from a GoPro Hero 6. That, along with the associated wires, were transferred onto the body of a racing drone. The result was palm-sized and fragile, with a dismal battery life of around three to five minutes a go. But the tiny size also allowed for an extremely nimble flying camera capable of shooting 4K video. The drone was flown at a slow speed, with McIntosh piloting through a pair of FPV racing goggles, with radio guidance from director of photography, Eric Maloney.

Acopian says the nature of the shoot required a fair bit of improvisation on the part of the crew, particularly with some scene utilizing up to 60 extras. Each were given a specific action to perform, while the director sat far away, giving directions through a bullhorn, so as to not be picked up through the camera’s wide-angle lens.

“We weren’t able to rehearse with the cast or block out a flight path with the drone ahead of time,” she explains, “so the biggest challenge was showing up at a new location each morning and figuring out what the drone path, talent blocking and VFX markers would be, then rehearsing as much we could up until around two hours before sundown, at which point we had as many takes as we could fit into that two-hour window to nail the shot. If something wasn’t working, we changed it because otherwise we put the whole scene at risk of not happening.” 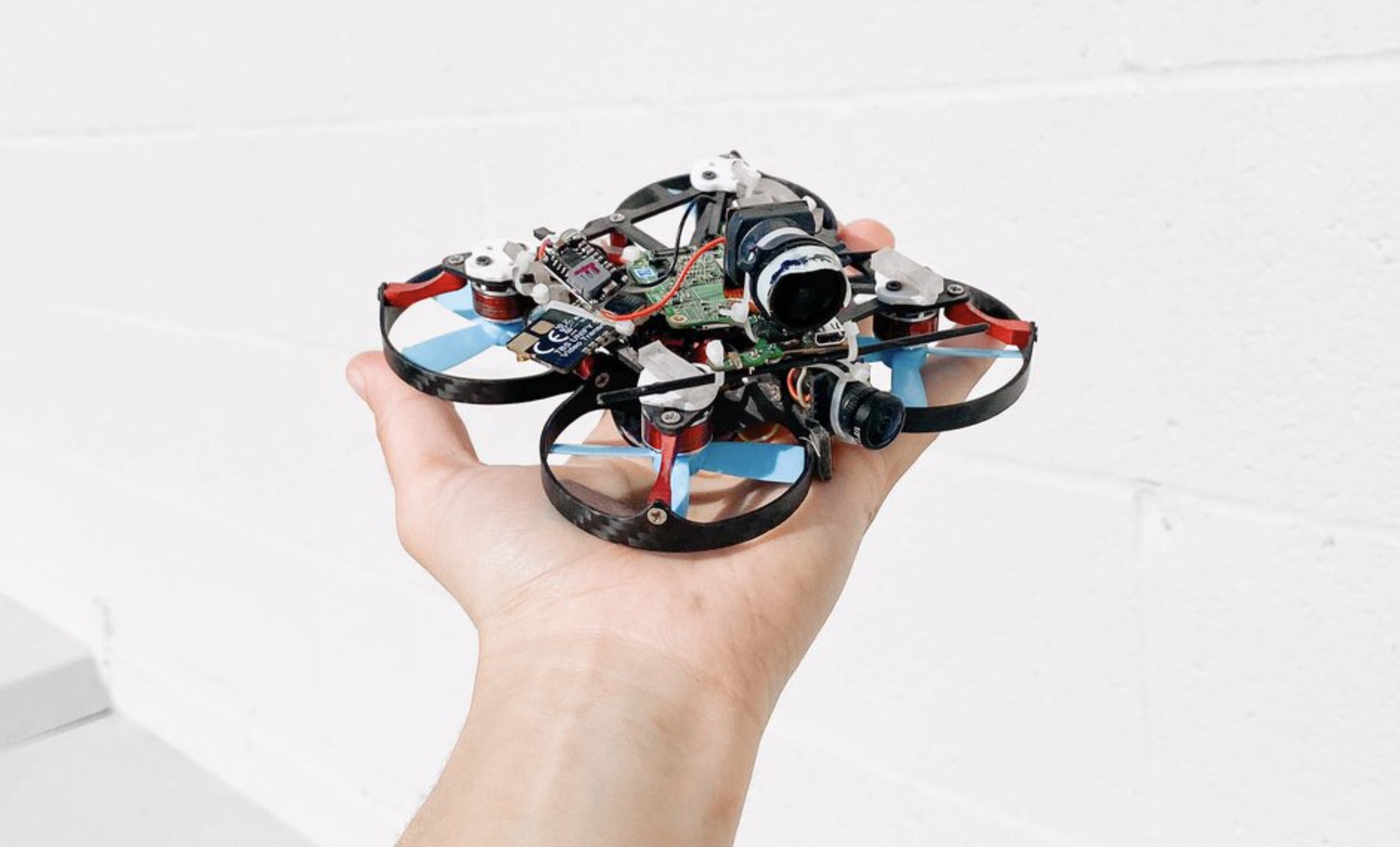 Each scene naturally required multiple takes — up to 15 in some cases. And yes, that fragile little drone did crash a few times — though it was mostly no worse for wear.

“There was one crash that gave us all a scare, which happened while filming the scene where a partygoer gets caked,” Acopian adds. “The actress took a step back, directly into the path of the flying drone, and the drone got caught in their hair and turned off. Luckily, she was chill with getting a little bit of her hair snipped off so we could get the drone out, and the guys were able to patch it up in about 20 minutes. Twenty minutes later we were shooting again and she took another cake to the face. A true hero.”

After the shoot, the video was processed through ReelSteady — stabilization software created by McIntosh, which was acquired by GoPro back in March. Then it was effects company Alpha Studios’ job to help stitch things together into one continuous shot.

“We originally wanted to make every transition completely seamless and hidden, but locations and logistics meant that we had to make most of our transitions stylized. We worked closely with Alpha Studios to plot out where one shot would end and where the preceding shot would begin,” producer Jeremiah Warren says. “Kaitlyn Yang, from Alpha Studios, was the on-set VFX supervisor and was key in helping us figure out these transition points that her team blended with VFX in post-production.”

The result is a lovely little glimpse into how drones can extend beyond the customary establishing shot and take a deeper storytelling role in the process.

“I know that the future for droning is very bright, and I anticipate that we’ll start to see drones used in ways that don’t immediately give away their ‘drone-ness,’ like to feign camera movements that would otherwise be difficult to achieve,” says Acopian. “You don’t have to be high to fly! Drones, especially FPV drones, have this fluidity to them that beautifully mirrors the way memories feel to me and I’m excited to see more people play with this to recreate the inner experience so many of us have in a new, relatable way.”