When Cisco bought AppDynamics in 2017 for $3.7 billion just before the IPO, the company sent a clear signal it wanted to move beyond its pure network hardware roots into the software monitoring side of the equation. Yesterday afternoon the company announced it intends to buy another monitoring company, this time snagging internet monitoring solution ThousandEyes.

Cisco would not comment on the price when asked by TechCrunch, but published reports from CNBC and others pegged the deal at around $1 billion. If that’s accurate, it means the company has paid around $4.7 billion for a pair of monitoring solutions companies.

Cisco’s Todd Nightingale, writing in a blog post announcing the deal said that the kind of data that ThousandEyes provides around internet user experience is more important than ever as internet connections have come under tremendous pressure with huge numbers of employees working from home.

ThousandEyes keeps watch on those connections and should fit in well with other Cisco monitoring technologies. “With thousands of agents deployed throughout the internet, ThousandEyes’ platform has an unprecedented understanding of the internet and grows more intelligent with every deployment, Nightingale wrote.

He added, “Cisco will incorporate ThousandEyes’ capabilities in our AppDynamics application intelligence portfolio to enhance visibility across the enterprise, internet and the cloud.”

As for ThousandEyes, co-founder and CEO Mohit Lad told a typical acquisition story. It was about growing faster inside the big corporation than it could on its own. “We decided to become part of Cisco because we saw the potential to do much more, much faster, and truly create a legacy for ThousandEyes,” Lad wrote.

It’s interesting to note that yesterday’s move, and the company’s larger acquisition strategy over the last decade is part of a broader move to software and services as a complement to its core networking hardware business.

Just yesterday, Synergy Research released its network switch and router revenue report and it wasn’t great. As companies have hunkered down during the pandemic, they have been buying much less network hardware, dropping the Q1 numbers to seven year low. That translated into a $1 billion less in overall revenue in this category, according to Synergy. 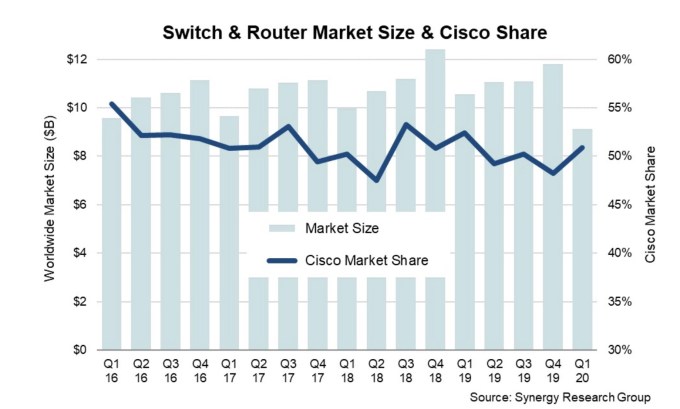 While Cisco owns the vast majority of the market, it obviously wants to keep moving into software services as a hedge against this shifting market. This deal simply builds on that approach.

ThousandEyes was founded in 2010 and raised over $110 million on a post valuation of $670 million as of February 2019, according to Pitchbook Data.

Cisco snaps up AppDynamics for $3.7B right before its IPO