The USB audio interface is a fairly standardized device — for those who might not know, that’s the hardware you use to take a microphone or instrument that uses an XLR or 1/4″ output and get that into your computer via a USB connection for recording or streaming. There are a lot of choices in USB audio interfaces, from a wide range of brands, but a relatively new entrant from Audient is the EVO 4, a modern take on the device that includes some smarter tech tweaks to make using one even easier.

The EVO 4 is a 2 in/2 out audio interface, which means that it supports input from up to two microphones or instruments, and can output to speakers and/or headphones, as well as your computer. Audient has made the EVO 4 even more flexible on the input front with a dedicated 1/4″ input for plugging in your guitar, in addition to the combo XLR+1/4″ connectors on the back. This is a great feature for anyone looking to use this as a recording method for instruments, and goes above and beyond most of its competitors in terms of flexibility.

Audient has also helpfully used USB-C as the primary connector for linking up the EVO 4 to your computer. This means it’s likely to work with cables you already have or that are easy to find no matter where you happen to want to use it. The USB-C connection also not only routes audio to your computer, but also provides all the power the EVO 4 needs to operate, including what it requires to provide 48v phantom power to microphones that require that to operate. The fact that it’s powered via USB makes it super handy for portable use, and its overall small size helps with this as well, making it the perfect audio interface for creating a lightweight, very packable podcast interview kit.

On top of the EVO 4, you’ll find all the physical controls. There’s a single large volume dial, two buttons to select the XLR inputs, a 48v phantom power toggle, a monitor mix and pan button and a volume button that applies to both headphones and any attached speakers. There’s also a dedicated, large green button that’s specifically for Smartgain, a unique feature Audient has included with the EVO 4 that really boosts its convenience — more on that later. 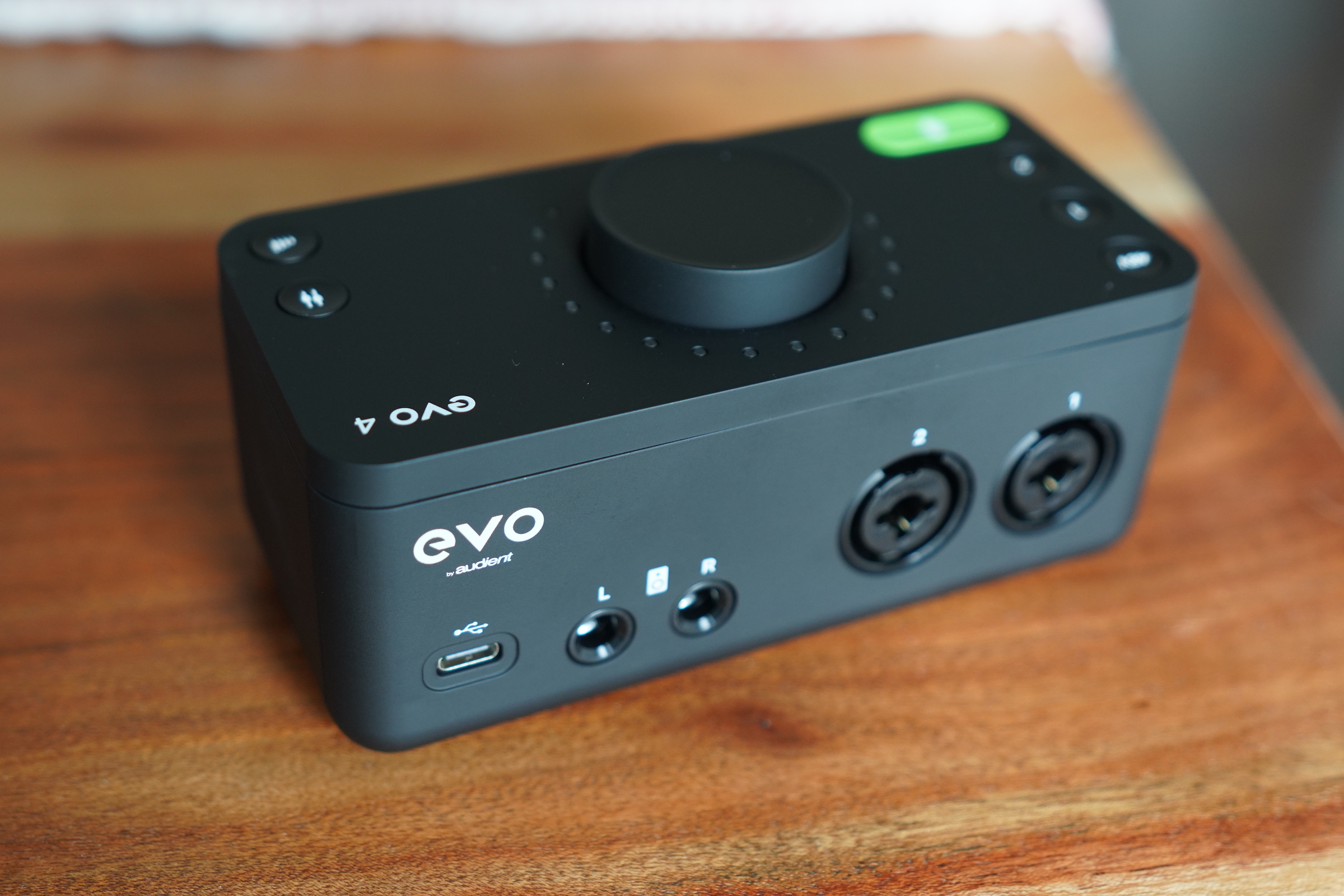 The EVO 4’s control interfaces are a bit of a mixed bag — on the one hand, they help keep the hardware minimalist and sleek. On the other, there is a bit of a learning curve to figure out how to adjust input volume levels, control interfaces, switch between different outputs and adjust the mix to each, and more. It’s definitely a more modern interpretation of an audio control surface (many other USB interfaces still just primarily use dedicated hardware switches and dials for most of these things), and so it’s going to have a learning curve for anyone used to the older way of doing things. That said, once you do figure out what everything does and what to press, in what order, it’s all relatively intuitive and easy to remember from that point on.

Where the EVO 4 really shines is in the features that Audient has added to make it more convenient and flexible than your average USB audio interface. Two in particular, Smartgain and Audio Loop-back, are immensely useful and make using the EVO 4 incredibly easy and convenient, even for people inexperienced in any kind of audio recording or editing.

Smartgain, which as mentioned has a dedicated button on the top of the EVO 4, lets you automatically set the gain (essentially the input volume) level of any instrument or mic you plug into the interface for the best possible results. Typically, setting gain levels on a USB audio interface is a fully manual affair, and involves a lot of listening back to yourself either via monitors or through recordings. With Smartgain, you simply tap the button, tap the input you want to set (you can select both), and start speaking, singing or playing — after a few seconds, the button will flash green to indicate that it has set the gain level based on the volume of your input. 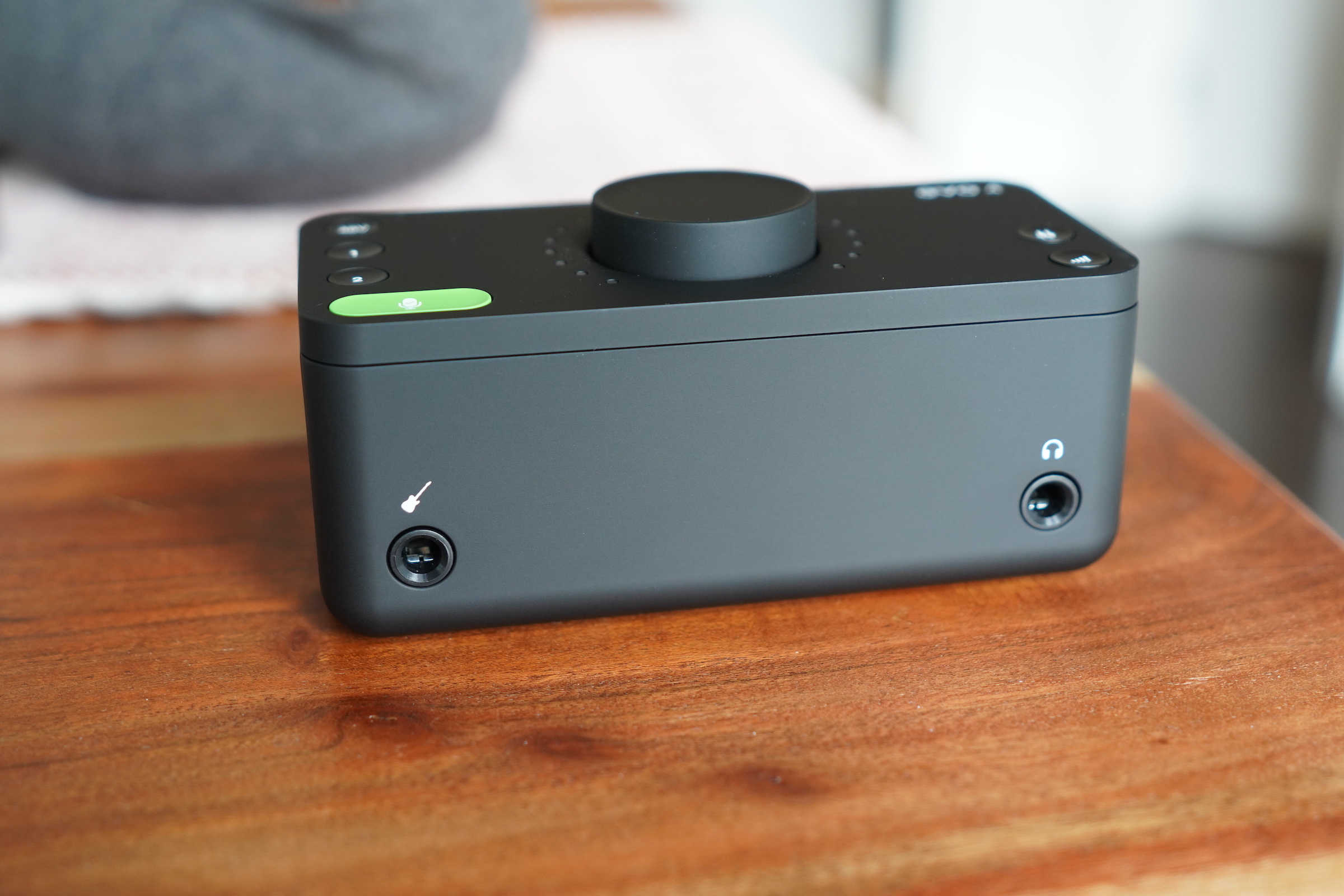 If you’re doing a recording where you’re both singing and playing guitar, for instance, you can set Smartgain to determine the best level for each input, which makes it super simple to record a balanced multitrack recording of both. It’s hard to understate how much time and frustration this can save in the recording process.

As for Audio Loop-back, it similarly makes it easier to record audio — but by allowing you to capture the sound coming from your computer, as well as the inputs from whatever mics or sources you have plugged into the EVO 4 itself. This is a super handy feature for something like an advanced game-streaming setup, as you can use it to route the sound from any game you’re playing along with your commentary via your mic plugged into the interface to the same output source.

Audient accomplishes this without the need for any additional hardware or connections from the EVO 4 to your computer, but you will need to makes some adjustments in either the streaming or recording software you’re using, or in your computer’s audio devices settings. Luckily, the company provides clear and easy-to-follow instructions about how to do that depending on your specific needs.

Often, this kind of thing requires an additional dedicated capture device, and a much more complicated and roundabout setup in software, too. Audient building it into the EVO 4 shows that they recognize the needs of the modern market for USB audio interfaces, and it’s a great competitive advantage for the gadget over the rest of the field.

At $129, Audient’s EVO 4 is a remarkable value for a USB audio interface with these capabilities. One of the most popular devices in the same category, the Focusrite Scarlett 2i2, retails for $30 more, is larger and doesn’t come with any features similar to Smartgain or Audio Loop-back.

EVO 4 is compatible with PC, Mac and iOS devices, and it’s small enough to be perfect for a portable setup, as well as taking up very little desk space. It has a matte black, lightly textured surface that looks great, and the large volume dial has graduated, clicky tactile response that makes it simple to use.

For podcasters and at-home recording artists, this is a fantastic option that packs a lot of value and quality into a sleek, feature-rich package.