Google is rolling out a series of updates aimed at helping local businesses adapt to the COVID-19 pandemic while continuing to serve their customers across Google Maps and Search. Since the outbreak, Google has made it possible for businesses to communicate to customers things like their revised operating hours or temporary closures, among other things. Now, it’s adding and expanding a set of features that will allow businesses to support themselves, including those focused on gift card sales, fundraising or by marketing their virtual services. Restaurants will also be able to point to their preferred delivery partners, so customers can choose to order through the third-party the business recommends.

That latter item addresses what’s been a particularly sore point for restaurant owners amid the pandemic. Already, restaurants found food delivery apps’ large commission fees difficult to swallow. Now, these apps are profiting from the industry’s collapse as the pandemic rages on. 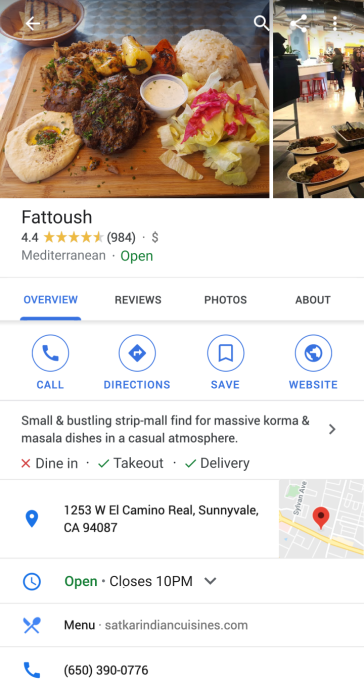 While Google’s update won’t allow restaurants to avoid these commissions, businesses will at least soon be able to communicate which delivery app they’d prefer customers to use — and it will likely be the one offering the lowest fee.

Google also says it has expanded the set of delivery partners it works with across the U.S., Germany, India, Australia and Canada. This makes it possible for Google Maps users to order delivery from more than 25,000 new restaurants and has already pushed users’ food order requests to over half a million per week.

In addition, Google is expanding a recently launched product that will allow businesses to sell gift cards to support themselves during government shutdowns and slower customer traffic after re-opening. Google says businesses were already promoting their gift card links on their profiles, in many cases.

Customers will be able to donate to favorite businesses directly from Google Search in more markets. To make this possible, Google partnered with PayPal and GoFundMe for businesses that opt in to use this feature. 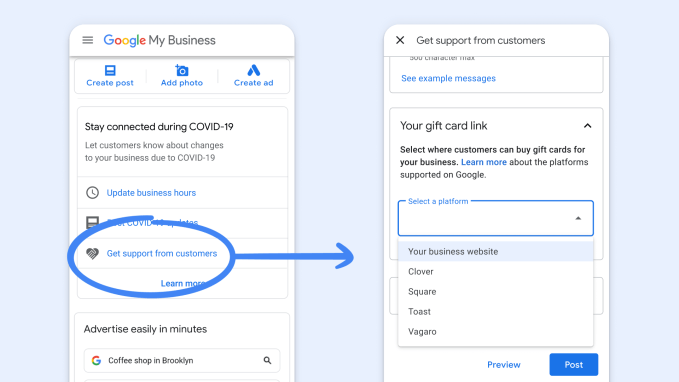 Google began by allowing merchants in six countries to add support links for donations and gift cards, including the U.S., Canada, United Kingdom, Ireland, Australia and New Zealand. Now 18 more countries will gain the feature, including Italy, Spain, Japan and others.

Merchants will be able to promote a link that directs users to purchase their gift cards either on their own business website or through supported partners like Square, Toast, Vagaro and Clover. This feature will roll out first with merchants in the U.S., Canada, U.K., Ireland, Australia and New Zealand before expanding to 18 more countries over the summer.

Another change aims to address the broader way the pandemic is impacting in-person businesses. Instead of shutting down entirely, many have chosen to pivot and go virtual. Restaurants have turned themselves into virtual kitchens, for example. Yoga studios have begun streaming classes online.

In the next few weeks, merchants who are verified through Google My Business will be able to alert their customers that they’re operating in a new capacity by adding to their profiles attributes like “online classes,” “online appointments” and “online estimates.” These will display in both Search and Maps, Google says.

Related to this, Google is expanding its Reserve with Google appointment-setting program to help merchants offer easy online appointment bookings that customers can book directly from a Business Profile, then add to their own Google Calendar. Today, Google’s program integrates with more than 100 partners for online bookings. It’s now adding Booksy, Regis, WellnessLiving and Zooty. 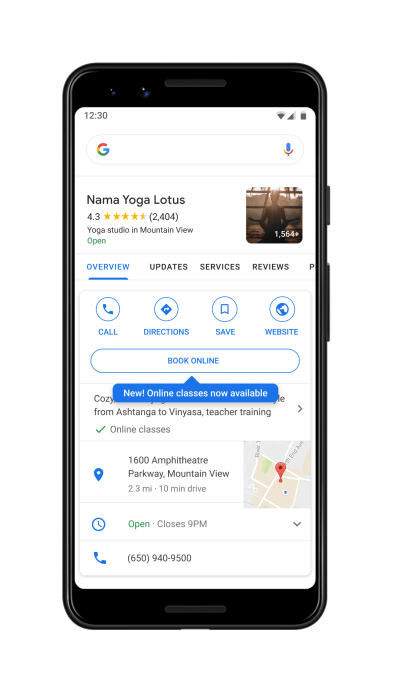 Google’s ability to connect customers with local businesses has a sizable impact, especially in light of the coronavirus pandemic, which has resulted in a surge of new traffic across Google Maps and Search alike.

For example, Google said it has seen a 260% increase in worldwide search interest in terms like “takeout near me” since February, before reaching an all-time high in April. Global search interest for the phrase “how to help small businesses” reached an all-time high in March 2020, up 700+% from what Google saw in February. And over a million businesses have shared COVID-19 posts on their profiles since March, resulting in millions of clicks to merchants’ websites every week.

Unfortunately, despite the rapid pace of the updates on Google’s part they still may have arrived too late for some businesses. Google saw more temporary and permanent business closures in March and April 2020 than it saw during all of 2019. Economists are now projecting that more than 100,000 small businesses in the U.S. have closed permanently since the pandemic escalated in March.

It’s hard to quantify how much Google could have helped here had it moved even faster, but it’s worth noting that other sizable social networks, including Facebook, Yelp, Instagram and Nextdoor, have already rolled out new features focused on helping businesses sell their gift cards and/or link to fundraising efforts.

Google’s updates, meanwhile, are rolling out in the days, weeks and months ahead, depending on the feature in question and the merchant’s geographic location. By then, the businesses that have survived government lockdowns are those that likely found alternative ways to reach customers and fundraise without Google’s help.

Google knows how critical its tools are, at least.

“There’s a new survey that was recently conducted by the Connected Commerce Council, and what they heard was that nearly 1 in 3 small businesses say that without digital tools they would have had to close all or part of their business,” Fitzpatrick noted. “So digital is suddenly even more at the forefront in terms of how small businesses are looking to operate and help them survive.”