Newly released documents show U.S. immigration authorities have used a secretive cell phone snooping technology hundreds of times across the U.S. in the past three years.

The documents, obtained through a public records lawsuit by the American Civil Liberties Union and seen by TechCrunch, show that U.S. Immigration and Customs Enforcement (ICE) deployed cell site simulators — known as stingrays — at least 466 times between 2017 and 2019, which led to dozens of arrests and apprehensions. Previously obtained figures showed ICE used stingrays more than 1,885 times over a four-year period between 2013 and 2017.

The documents say that stingrays were not deployed for civil immigration investigations, like removals or deportations.

Although the numbers offer a rare insight into how often ICE uses this secretive and controversial technology, the documents don’t say how many Americans also had their phones inadvertently ensnared by these surveillance devices.

“We are all harmed by government practices that violate the Constitution and undermine civil liberties,” said Alexia Ramirez, a fellow with the ACLU’s Speech, Privacy, and Technology Project. “ICE’s use of cell site simulators affects all people, regardless of their immigration status.”

“When cell site simulators search for an individual, they necessarily also sweep in sensitive, private information about innocent bystanders,” said Ramirez. “This is part of the reason courts have said there are serious Fourth Amendment concerns with this technology.” 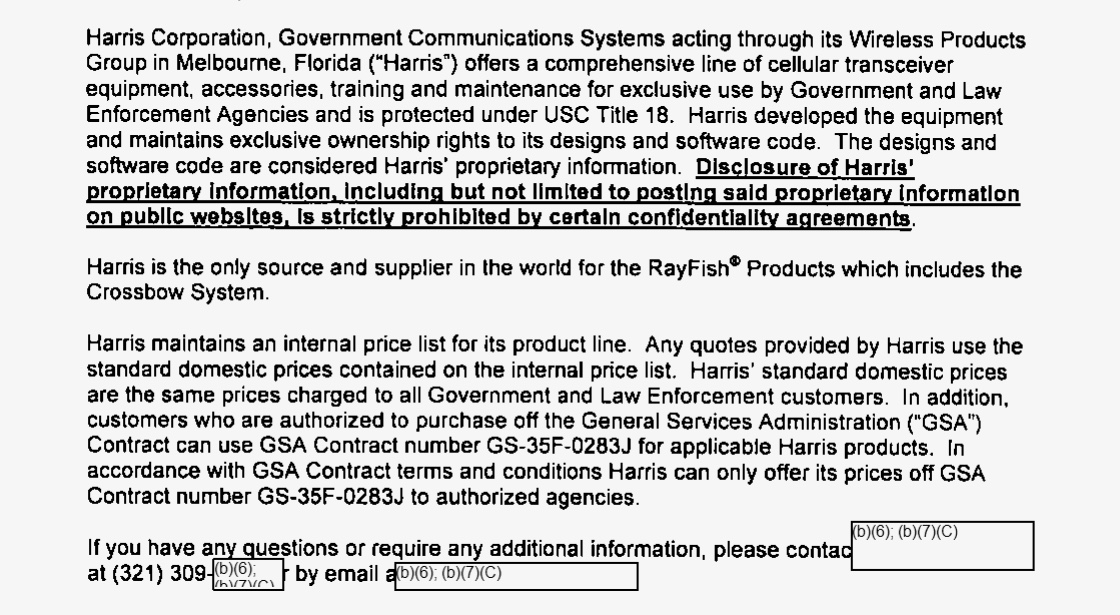 Stingrays impersonate cell towers and capture the calls, messages, location and in some cases data of every cell phone in their range. Developed by Harris Corp., stingrays are sold exclusively to law enforcement. But their purchase and use are covered under strict non-disclosure agreements that prevent police from discussing how the technology works. These agreements are notoriously prohibitive; prosecutors have dropped court cases rather than disclose details about the stingrays.

The newly released documents are heavily redacted and offer little more about what we know of how stingrays work. One document did, however, reveal for the first time the existence of Harris’ most recent stingray, Crossbow. An email from 2012 refers to Crossbow as the “latest, most technologically up-to-date version of a Stingray system.”

But the civil liberties group said its public records lawsuit is not over. Customs and Border Protection (CBP), which was also named in the suit, has not yet turned over any documents sought by the ACLU, despite spending $2.5 million on buying at least 33 stingrays, according to a 2016 congressional oversight report.

“We are deeply skeptical of CBP’s assertion that they do not possess records about cell site simulators,” said Ramirez. “Given public information, the agency’s claim just doesn’t pass the sniff test.”

CBP has until June 12 to respond to the ACLU’s latest motion.

When reached, a spokesperson for CBP was unable to comment by our deadline. ICE did not respond to a request for comment.