Amazon is joining India’s online food delivery market just as top local players Swiggy and Zomato reduce their workforce to steer through the coronavirus pandemic and months after Uber Eats’ exit from the nation.

The e-commerce giant, which has invested more than $6.5 billion in India, today launched its food delivery service, called Amazon Food, in select parts of Bangalore. The company originally planned to launch the service in India last year, which it then moved to March but pushed it further amid the nationwide stay-at-home order the Indian government issued in late March.

In the run up to the launch, the e-commerce giant began testing the food delivery service with select restaurant partners in Bangalore with employees earlier this year, TechCrunch reported in late February. 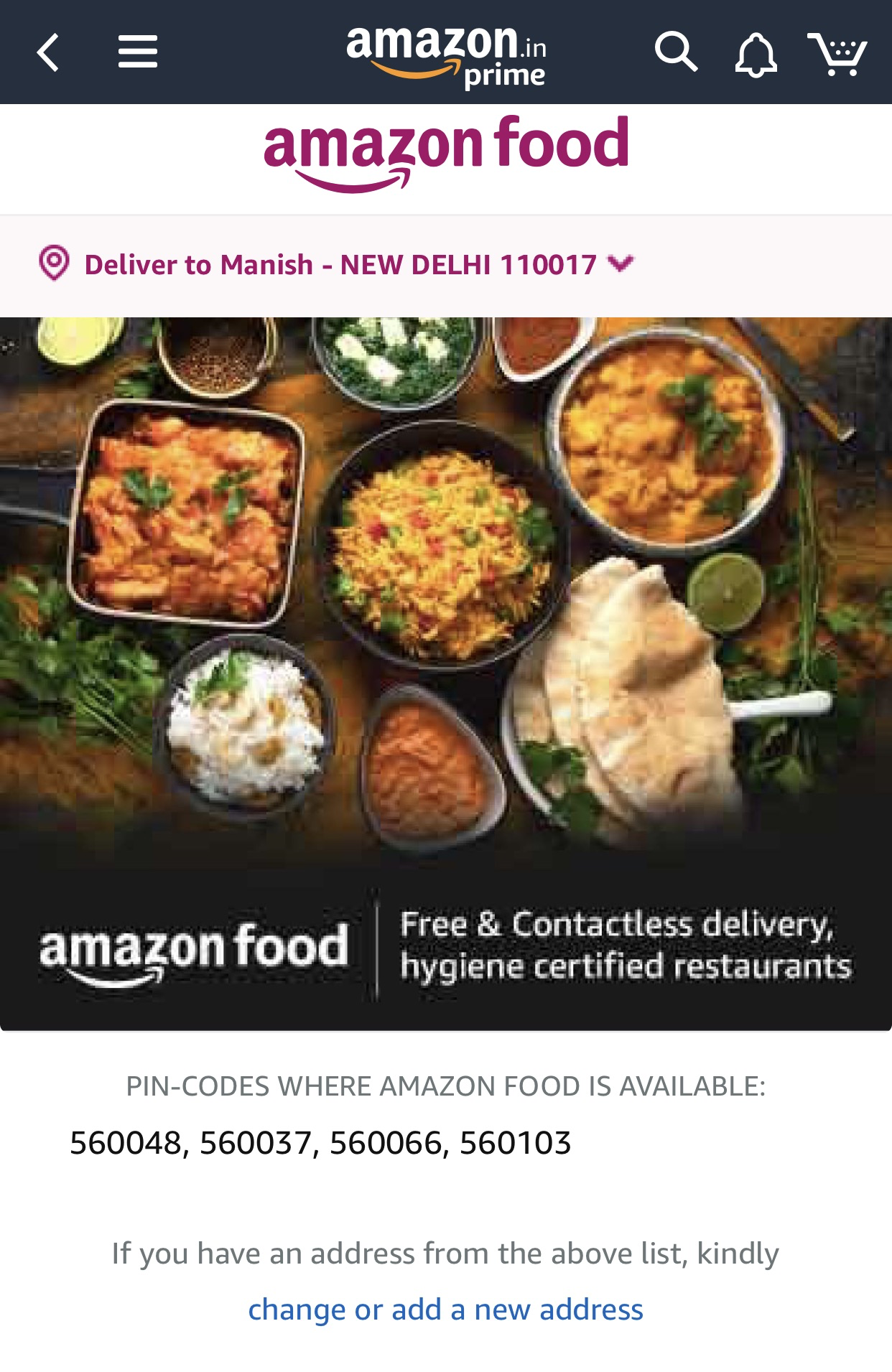 Amazon Food, which is available through Amazon’s marquee app, is currently available in the Bellandur, Haralur, Marathahalli and Whitefield suburbs of Bangalore.

“Customers have been telling us for some time that they would like to order prepared meals on Amazon in addition to shopping for all other essentials. This is particularly relevant in present times as they stay home safe,” an Amazon spokesperson told TechCrunch.

“We also recognize that local businesses need all the help they can get. We are launching Amazon Food in select Bangalore pin codes allowing customers to order from handpicked local restaurants and cloud kitchens that pass our high hygiene certification bar. We are adhering to the highest standards of safety to ensure our customers remain safe while having a delightful experience,” the spokesperson added. The company did not say how soon it plans to expand across India.

Amazon’s foray into the food delivery market could create new challenges for Prosus Ventures-backed Swiggy, and Zomato, an 11-year-old startup that acquired Uber Eats’ business in India in January this year, and Google-backed Dunzo, which operates in Bangalore and counts food delivery as one of the biggest parts of its business.

Swiggy and Zomato, having raised more than $2 billion together, are still not profitable and are losing more than $15 million each month to acquire new customers and sustain existing ones.

Anand Lunia, a VC at India Quotient, said earlier this year that the food delivery firms have little choice but to keep subsidizing the cost of food items on their platform, as otherwise most of their customers can’t afford them.

Figuring out a path to profitability is especially challenging in India, as unlike in the developed markets such as the U.S., where the value of each delivery item is about $33, in India, a similar item carries the price tag of $4, according to estimates by Bangalore-based research firm RedSeer.

On top of that, Zomato and Swiggy have established a duopoly in the market, and are facing additional challenges.

In the last month, Swiggy has let go more than 2,100 employees and Zomato has eliminated about 520 roles at the company as many people become cautious about ordering food online amid the coronavirus outbreak. Both the startups today are seeing fewer than 1 million orders on their respective platforms, down from nearly 3 million they were each processing earlier this year.

Swiggy has additionally scaled down its cloud kitchen operations and some other adjacent businesses. The Bangalore-based startup today began delivering alcohol in Ranchi, a city in the state of Jharkhand. Zomato said today that it will also offer alcohol delivery in Ranchi starting later today. The startups have also started to deliver grocery items in recent weeks.

Amazon has launched Amazon’s Prime Now and Amazon Fresh platforms in India to sell perishables and grocery items in recent years, and expanded its warehouses in several parts of the country along the way.