As the coronavirus pandemic continues, throwing countries into lockdown and recession, two of the hardest-hit sectors have been travel and events. And startups operating in the space that have recently raised significant funding aren’t immune to the crisis.

Pollen, the U.K.-based influencer marketplace for travel and events that closed $60 million in funding in October, has axed about 31% of its staff, nearly 70 people, across the US and Canada, TechCrunch has learned. In addition, multiple sources, who spoke on the condition of anonymity, say that around three dozen staff in the U.K. have been put on furlough and that up to 10 U.K. contractors have been let go.

Founded in 2014 and previously called Verve, Pollen operates in the influencer or “word-of-mouth” marketing space. The marketplace lets friends or “members” discover and book travel, events and other experiences — and in turn helps promoters use word-of-mouth recommendations to sell tickets. Pollen’s backers include Northzone, Sienna Capital, Draper Esprit, Backed and Kindred. 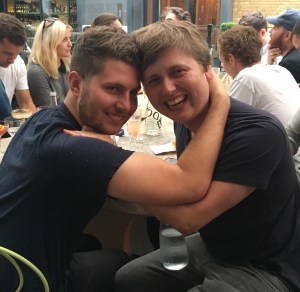 Confirming the North American job cuts, Pollen co-founder and CEO Callum Negus-Fancey (pictured right) told TechCrunch that 24 team members in Las Vegas have been axed, 29 in LA, 6 in Canada, and 10 that worked remote throughout U.S. That’s a cull of approximately 31% of Pollen’s 216 staff overall.

He also said that around 34 U.K. employees have been furloughed, and confirmed that the furloughed staff in question are being paid 80% of their salary up to £2,500 (via the U.K. taxpayer), with no top up from Pollen.

We also understand from sources that U.S. staff were provided with no additional severance, and that some staff were given as little as one week’s notice. Negus-Fancey doesn’t entirely dispute this, telling TechCrunch that “U.S. employees were given 1 week severance, plus 1 week for each additional year they [were] with the company” rounded up to the nearest 12 months.

The Pollen CEO also confirmed that U.S. employees were not given any paid additional medical benefits beyond the month they were served notice. However, each staff member laid off has the option to continue with COBRA coverage at their own cost.

Meanwhile, back in the U.K., a picture of confusion has emerged with regards to whether or not all U.K. staff put on furlough under the Coronavirus Job Retention Scheme will have jobs to return to.

Internal communication seen by TechCrunch shows Pollen management in late March discussing plans to make a group of U.K. staff redundant and then ask them to go on furlough in the interim anyway i.e. in a number of instances there wouldn’t be a job being retained.

Some days later, a series of group Zoom calls, rather than one-to-ones, were held between managers and teams affected. Accounts of exactly what was discussed on those calls vary, although some people present said attendees were “shocked,” with one attendee describing the atmosphere as “uncomfortable”.

Emails subsequently sent from team managers to a number of individual team members appear to offer confirmation that they no longer had a role at the company but would be offered furlough from 1st of April onwards. Those staff were also locked out of Pollen’s systems with immediate effect (Slack, emails etc.), and in some instances offered “next steps” coaching and help with job search.

Separate emails sent to affected staff by Pollen’s General Counsel sought “deemed consent” in relation to being put on furlough, giving them just 24 hours to raise any objections.

Asked about internal discussions with regards to redundancies and staff being told by their managers that they were being let go, Negus-Fancey disputes that U.K. staff put on furlough no longer have jobs to return to. In a statement provided to TechCrunch he said “there is a possibility for every employee who has been put on furlough to have their job back”.

We believed it was appropriate to tell some employees it was unlikely they would get their job back – this seemed like the humane and appropriate thing to do. There was so much uncertainty at the time and we were processing/managing unknown territory and a lot of new information. We had no way of knowing the answer to the question and did not want to mislead anyone or give them a false sense of hope. This made sure that affected employees fully understood the situation and could plan accordingly. Some have looked for new permanent roles and successfully found a new role and we are happy for them. Our number one goal was to put our team first and support them during this time.

The scheme has been very successful, many employees who would have otherwise been made redundant will now keep their job. The extension of the scheme has further increased the number of jobs which will be saved at Pollen.

Furthermore, Negus-Fancey says “FAQs and other resources” were produced to help managers with furlough conversations, adding that if any management “miscommunicated” to U.K. staff that they were being let go, then this “would have been because of a misunderstanding”.

One question the Pollen founder wasn’t able to answer immediately was why some furloughed employees had access to the company’s systems revoked, while others did not, if they were all expected to return to work once the furlough period ended.

Initially, Negus-Fancey suggested it was so that furloughed staff wouldn’t be tempted to work (under the Coronavirus Job Retention Scheme, working for the company that put you on furlough is prohibited).

Later, after clarifying this with members of his U.K. team, he emailed to say that “employees who were furloughed who had the highest possibility of coming back (top of the list if jobs became available) were not locked out of some systems e.g. social tools. On top of this, anyone who asked not to be locked out, wasn’t locked out”.

Travel and events at a standstill

The upheaval at Pollen is just one example of the challenges that travel and events-focused tech companies have faced in recent weeks. With consumers virtually unable to travel anywhere or converge for any in-person group events, companies that have built business models around such leisure activities have found themselves scrambling to reduce their burn rate or having to more fundamentally change how they operate.

Airbnb is probably the most high-profile example. The popular peer-to-peer accommodation and experiences platform has seen a halt to much of its business in the last two months, leading it to lay off 1,900 employees (25% of its global workforce) and rethink its product offerings. It’s also seen its valuation nearly halved to $18 billion according to reports. Another example is TripAdvisor, which announced it was laying off 900 people, or 25% of staff.

In the case of event-based companies (events being a key part of Pollen’s business model), there is an argument to be made that even before the coronavirus took hold, it was a challenging business model for all but the most focused and scaled efforts.

Fyre Festival, with its own focus on exclusivity and influencer marketing, was an infamous flop; the U.K.’s Yplan eventually sold at a major loss, and Eventbrite, which is now public, has seen its stock drop drastically since mid-February, just as COVID-19 really started to take its grip on the globe. It’s not all doom and gloom — pre-coronavirus crisis, Get Your Guide had actually been scaling nicely — but it’s a grim situation.

Turning back to Pollen, the company says that even with the coronavirus crisis, it has been bringing in revenue by shifting to selling experiences for 2021. Asked about current burn-rate, post-layoffs, Negus-Fancey said Pollen does not disclose its cash position publicly. “However, we’re comfortable from a financial perspective,” he added.