“We’re living through extraordinary times,” Microsoft CEO Satya Nadella said as he opened his Build 2020 keynote on a somber note. It was an odd tonal shift following the event introduction by hosts Seth Juarez and Dona Sarkar.

The pair kicked off the 48-hour live stream standing a CDC-approved social distance from one another behind a large desk, trading silly banter and dad jokes. That last bit, at least, carries a sense of normality amidst these extraordinary times.

Awkward banter and goofy jokes are a mainstay in tech presentations, for better or worse — but there’s bound to be an extra level of strangeness when you strip away the live audience (particularly the overly enthusiastic employees planted in the audience). At best, it can have YouTube presenter energy and at worst, it’s like one of those videos of sitcoms with the laugh track edited out.

As a necessary first-time experiment, Microsoft’s Build 2020 keynote was probably more good than bad. It was arguably the first truly big tech company event on this level since pandemic really started locking things down. After all, Apple’s WWDC isn’t until next month, and Google essentially punted on I/O, removing even the online elements.

“Right now, the most important thing all of us can do is focus our attention on helping people with the new challenges we all face,” the company wrote at the time. “Please know that we remain committed to finding other ways to share platform updates with you through our developer blogs and community forums.”

It’s a difficult decision to make either way, of course. Certainly the gravity of the pandemic can make such an event seem inconsequential by comparison, but there’s also something to be said when a company can reintroduce a sense of normality — albeit through artificial means.

The Juarez/Sarkar bumpers are intended to serve as a through line through the two days of programming, and naturally a little vamping is going to be involved. In the case of the opener, it was five or so minutes of the co-hosts scrolling through Twitter hashtag comments on a Surface Studio, in a bid to approximate the sense of community one has in attending an in-person developer conference. 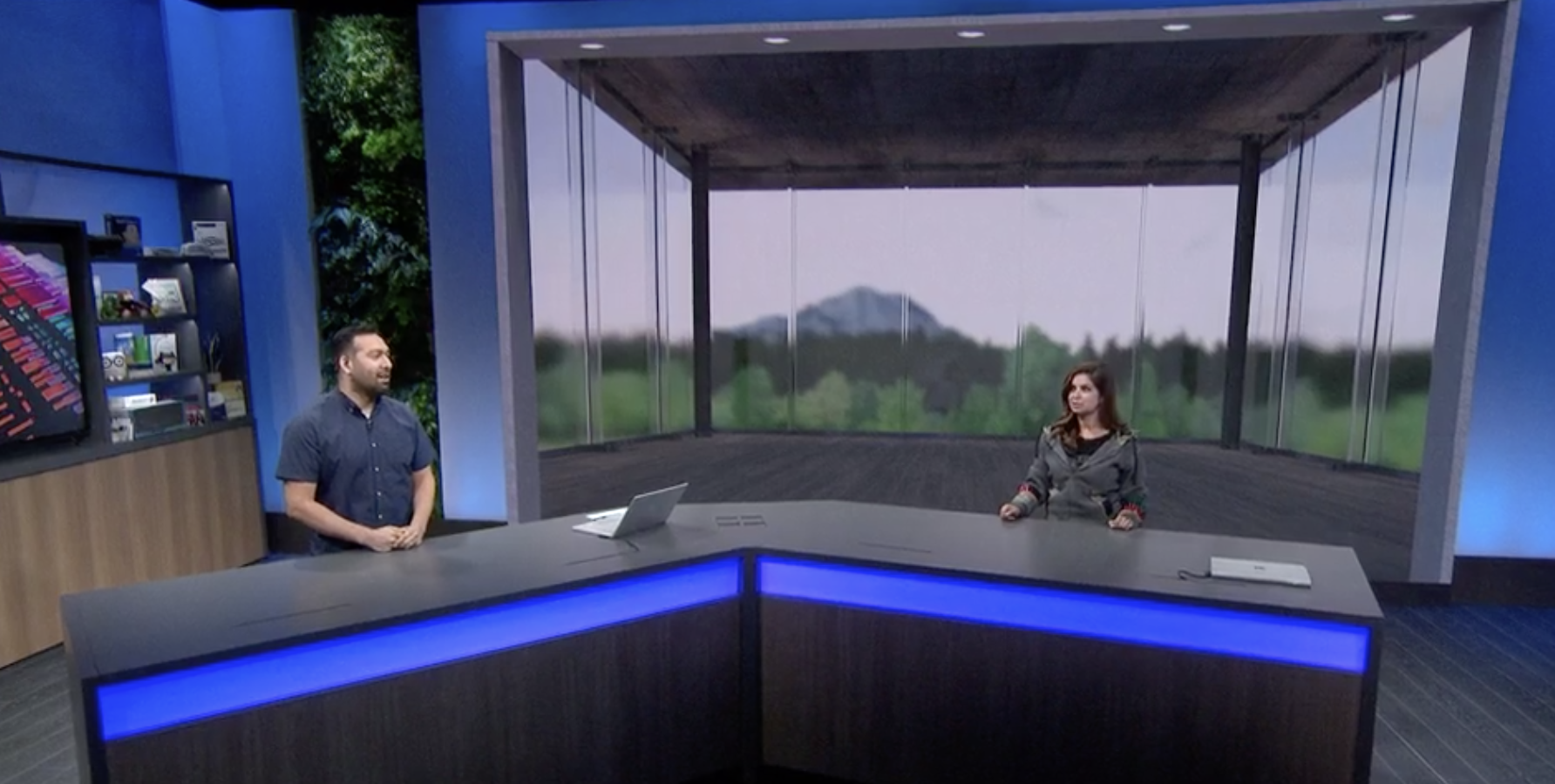 Nadella’s presentation that followed struck a better balance. It was simple and likely prerecorded, with the executive standing in front of a full shelving unit housing knickknacks and family photos. He addressed the camera, as the feed cut back and forth between him and clips. If things felt off, it was mostly due to the fact that it’s impossible to watch it without constantly comparing it to the pomp of previous years’ event.

Microsoft perhaps took a note from Nintendo, which switched from live keynotes to a prerecorded Tree House presentation at E3 several years ago. It’s a trade-off that loses some of the excitement of the standard format, but adds the ability to perfect a presentation through multiple takes. Nintendo above all benefits from the use of countless game trailers. B-roll is an extremely important piece of that puzzle.

The curse of the live demo is gone, if you want it. Though the heavy reliance on Skype conversations in a followup Microsoft presentation really hammered home the fact that few of us live in home studios. Plane noises and lawnmowers were a regular reminder that things are just going to be weird for a while. Not bad, necessarily, but weird.

There’s certainly good to come out of this forced reformatting. For one thing, Build is accessible through a free registration. The official chat (which was a train wreck for reasons I won’t go into here) was full of excited developers and observers announcing that this was their first-ever Build. Ticket prices, travel and the limitations of in-person event spaces are difficult hurdles for many.

The next few months will determine whether this is the new normal for these sorts of events. It would be hard to blame organizers for continuing with an abundance of caution into 2021. I suspect many will return to the in-person event, but hopefully the added accessibility of the virtual element will live on beyond the threat of COVID-19.