Ashwin Ramasamy Contributor
Ashwin Ramasamy is the co-founder of PipeCandy, an online merchant graph company that discovers and analyzes business and consumer perception metrics about DTC brands and e-commerce companies.
More posts by this contributor

E-commerce is taking off faster than ever. In the last couple of weeks, my Twitter timeline has been filled with operators gushing about how the weekends seem like Black Friday, even for non-essential commodities. Change is already here.

As we help thousands of businesses to move online, our platform is now handling Black Friday level traffic every day!

It won't be long before traffic has doubled or more.

Our merchants aren't stopping, neither are we. We need 🧠to scale our platform.https://t.co/e2JeyjcEeC pic.twitter.com/6lqSrNUCte

Looking at the above graph in this Tweet from Shopify CTO Jean-Michel Lemieux — and the passing, contextless mention of “Offline2Online” — we got curious.

Beyond just the anecdotal evidence, we looked for signs that tell us e-commerce is being adopted at a faster pace. One way to ascertain that is to look at the historical data of how Shopify has been onboarding merchants for the last two years on a monthly basis, and compare that with what happened this year in Q1.

All of these data points come from PipeCandy’s own data platform that tracks close to 750K+ Shopify merchants with historical data for each: 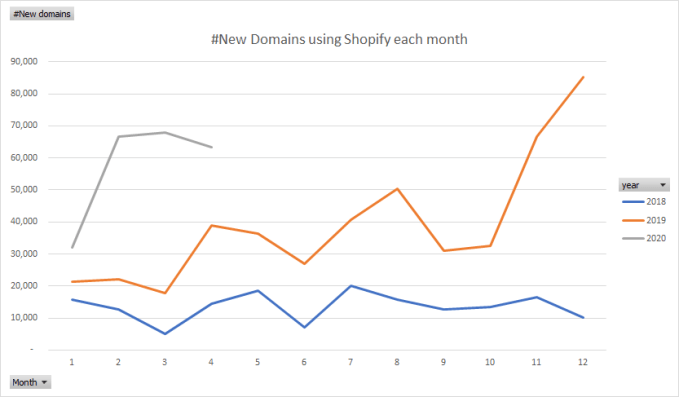 While 2020 started on a faster clip than 2018 and 2019, February and March have seen nothing short of jaw-dropping growth in merchant numbers for Shopify. In those two months alone, Shopify seems to have onboarded more merchants than in the whole of 2018.

The softening you see in April is a result of the lag in the way our systems validate and confirm the data and not a slowdown in Shopify per se. The e-commerce embrace is real.