2020 is a nightmare year by most metrics, and it’s also a worst-case scenario emerging out of a best-case scenario for Joe Biden. After trailing in early primary states, Biden came crashing back on a stunning wave of Super Tuesday support. Now the presumptive Democratic nominee in the midst of a global health crisis that’s immobilized the U.S. workforce and somehow even further polarized American politics, the former vice president will have to navigate completely uncharted waters to find a path to the presidency.

Biden — not the most internetty candidate out of 2020’s wide Democratic field by a long shot — is now tasked with getting creative, connecting with voters not at rallies or traditional events, the kind of thing the famously affable candidate excels at, but through screens. Making those connections is crucial for attracting less-engaged voters, wrangling straying progressives and even maintaining its body of existing supporters, who need to be kept energized to power the campaign into the general election.

To that end, the Biden campaign is rolling out a new collection of digital assets to energize supporters stuck at home and to communicate the Biden brand’s visual language to everybody else. The selection of “Team Joe swag” includes some DIY options for supporters like big “No Malarkey!” home window placards and “We want Joe” button templates. 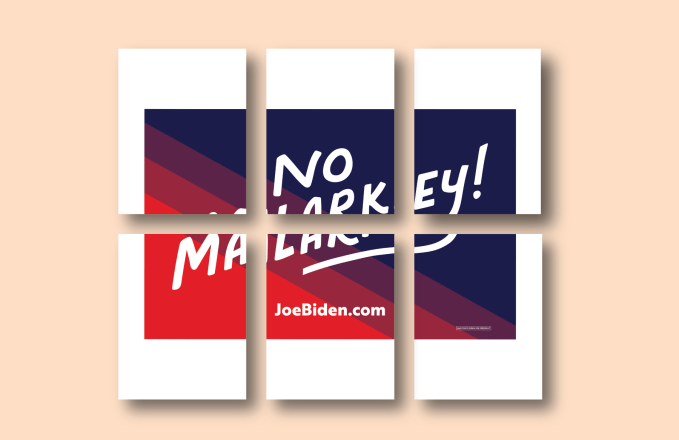 The campaign is also releasing an array of print-friendly coloring book pages to amuse idle politically inclined progeny. Some of the pages thank front-line workers and immortalize Biden’s two German Shepherds in crayon, while others depict Biden’s more meme-worthy symbols: ice cream cones and his trademark aviator sunglasses. (A viral moment from 2014 combined the two.) 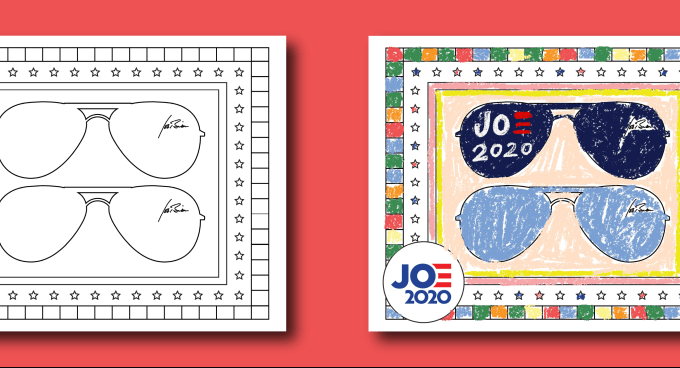 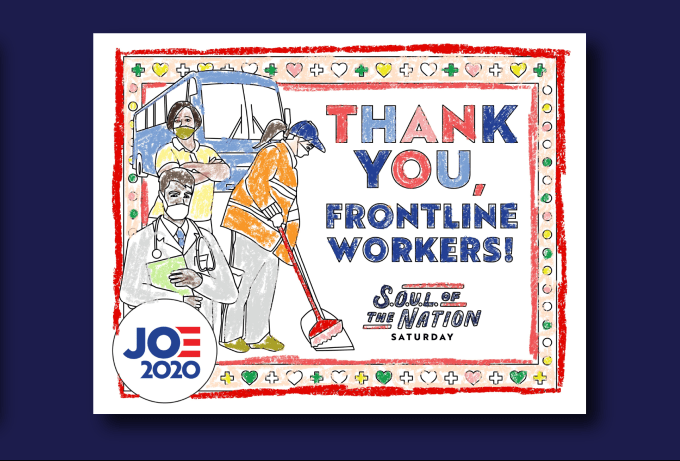 Some critics say he needs to ditch his basement studio, but Biden said he plans to follow public health guidelines, hitting the virtual campaign trail from his now-expanded home setup in Delaware via virtual town halls and video chats, like his recent Instagram Live sit-down with U.S. soccer superstar and former Warrenite Megan Rapinoe.

The signs and wallpapers are just a tiny part of the campaign’s big picture, but depending on what comes after, a candidate’s visual signature can sear a political moment into the collective consciousness. Think Obama’s 2008 “Hope” poster by the artist Shepard Fairey, later acquired by the National Portrait Gallery (Fairey himself later denounced the Obama administration’s drone program). Or Trump’s telltale red MAGA hats, which no one will be forgetting any time soon, regardless of how the general election shakes out.

For a campaign stuck indoors, visual branding is more important than ever. Biden’s visual brand mostly seems to focus on positive feelings that bring people together — kindness, faith, togetherness — rather than policy specifics or even “dump Trump” style calls to action.

“We want to find ways to make people feel involved while they’re cooped up at home,” the campaign’s Deputy National Press Secretary Matt Hill said. “These are tools that are going to help everyone who is involved with the campaign communicate that visually in a time when everyone is particularly logged on.”

Much has been written about how the virtual race poses unique challenges for the Biden campaign. The presumptive Democratic nominee is a candidate best known for his affable, empathetic in-person demeanor. But empathy doesn’t always perform well online, particularly when cast against the sound and fury of the factually unencumbered, cash-flush Trump campaign.

“Branding communicates values, and during this crisis we want to let Joe Biden’s values shine through,” Hill said. “Yes, it’s of course ice cream and aviators, but it’s also decency, empathy, hope and everything that is just the polar opposite of Donald Trump.”

The campaign frames this in broad strokes, good-against-evil language, describing Biden’s online movement as one of “empathy and human connection” out to topple the dark forces at work on the internet. The campaign’s digital director Rob Flaherty has said that 2020 is not just a fight for America itself, but also a “battle for the soul of the internet.”

“Right now, people are craving empathy and good… it gives us an advantage,” Hill said. “You have one side that often fights to win the Twitterverse with vitriol, and then you have us.”

Biden’s campaign has come under some scrutiny in recent weeks for the perception that it’s been slow to adapt to the pandemic era. Obama campaign veterans David Plouffe and David Axelrod penned a New York Times op-ed in early May calling for Biden to step up his digital efforts, likening his current broadcasts to “an astronaut beaming back to earth.”

After weeks of concern from insiders worried the Biden campaign might not be building the online momentum it needs, the campaign just beefed up its previously lean team with a flurry of new hires. The new talent will particularly build out the campaign’s digital operations, which it plans to double in size.

The hires include former Elizabeth Warren staffer Caitlin Mitchell, who will advise the Biden camp on digital strategy and help it scale up, BuzzFeed Video and Kamala Harris campaign alum Andrew Gauthier, who joins the Biden campaign as its video director, and Robyn Kanner, previously Beto for America’s creative director, to lead design and branding.

It will be interesting to see what else emerges out of the “Biden brand,” which doesn’t translate as easily to organic virality as Bernie’s all-purpose “I’m once again asking” meme or the somehow-not-cloying antics of Elizabeth Warren’s lovable golden retriever Bailey. At least for now, the campaign doesn’t seem to view that as a problem.

But cracking virtual campaigning is not the only headwind for the Biden campaign at the moment. Sexual assault allegations by former Biden Senate aide Tara Reade made their way into mainstream reporting in April. And if formulating a response to such serious allegations would be delicate under normal circumstances, the Biden campaign has had to figure out how do it from a silo. 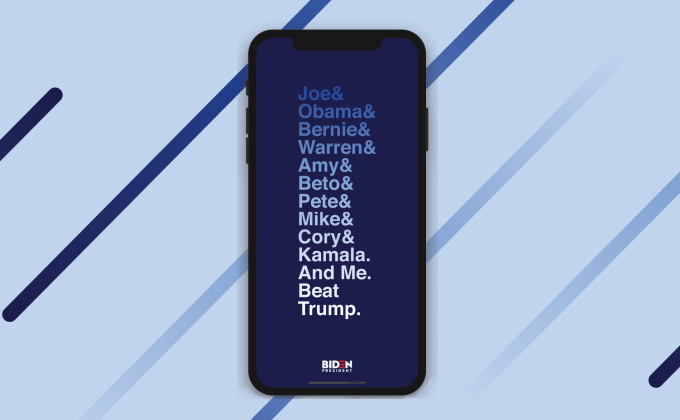 With its early technical difficulties ironed out, the Biden campaign may have a bit more breathing room to get creative. The campaign is focused on what it views as its “core platforms” for now — Facebook, YouTube, Instagram, Twitter and Snapchat — but it plans to both “invest more deeply” in those and also look at other platforms in the process of scaling up.

Stamoulis also notes that the campaign is in “close communication” with the major social platforms where it focuses its efforts.

“… We have scheduled and consistent check in times to go over best practices, recommendations, new tools and brainstorm ideas and concepts to help optimize our use of their platforms,” Stamoulis said. “We anticipate working closely with platforms as we continue to move into the general.”

Biden’s stay-the-course digital strategy seems to reflect the thinking of his unlikely Super Tuesday coup, believing that you need the biggest coalition possible and you don’t necessarily build it through the buzziest politics or the flashiest moments. The campaign doesn’t want Biden to go viral as much as it wants him to connect with the most people in the broadest possible sense.

And to his credit, between the South Carolina comeback and his team-of-rivals Super Tuesday trick, Biden pulled it all off somehow. If there’s anything we can count on in 2020, whether it’s U.S. politics or a global health reckoning, it’s that we don’t know what the hell is going to happen. That lesson seems especially resonant for the extremely online among us, who seem to discover again and again that we are but a tiny, self-selecting sliver of the American electorate.

There’s no word on if we’ll see Biden trading island codes for Animal Crossing à la AOC or a virtual likeness of the candidate looming over Fortnite’s map psychedelic Travis Scott-style, but in a truly unusual election year, nothing is quite off the table.