“I spend a lot of time being angry — but I’m still hopeful. Gender bias in medicine is systemic,” says Carine Carmy, the fast-talking CEO and co-founder of Origin, during a condensed chat about her startup mission to make physical therapy for women and mothers accessible and affordable across the US, both online and through a network of physical clinics.

The unexpected arrival of the COVID-19 pandemic led the LA-based startup to rework and accelerate its original launch plan — shifting its first focus to getting a telehealth service up and running fast.

They launched a “virtual care” service at the end of last month — offering “non-invasive, affordable care for commonly overlooked health issues”, from painful sex to postpartum recovery, as they put it in a press release, all of which is currently being served up via socially distanced Zoom video chat, thanks to the coronavirus.

Early growth in visits is running at 100%, month over month, per Carmy.

“We had originally planned to spend more time with in person care and then actually launch our digital platform — telehealth — in 2021. But March hit and it was very clear that we were going to have to close our doors for some period of time. So we decided to accelerate, really dramatically, the launch of our virtual care,” she explains.

“We launched a telehealth product in 48 hours, we converted the majority of our visits for the next month in person online and we had really, really great feedback and customer response —  both in terms of adoption but repeat visits as well. And that gave us the confidence to really accelerate both the brand launch but also to be able to serve many more women with telehealth and then ultimately with other digital products down the line.”

Origin’s virtual care offering is nationwide in the sense of being available as a “touchpoint” to women across the U.S., though Carmy notes it’s only “in network” (i.e. accepted by some insurance providers) in California at this point. “That’s a goal of ours — to expand insurance coverage nationwide,” she says.

“We’re rapidly onboarding new providers across the country to be able to serve patients in a deeper way. Right now we offer one-on-one physical therapy online in California, and we’re offering health coaching in other states and are expanding our coverage in the coming weeks. We have folks lined up in New York and Texas and other states that we’re onboarding right now.”

The wider plan — coronavirus pandemic willing — is to start building out a network of physical clinics to go alongside the telehealth service, expanding out from the initial clinic in LA. She says the team is eyeing other locations in California to potentially open up later this year.

“Our model is both in person and online but obviously COVID has accelerated the online component,” Carmy tells TechCrunch. “But, at the core, physical therapy designed for women really means we were looking at women’s anatomy; the hormonal differences that affect women at unique stages in life; and often looking at the very prevalent but overlooked healthcare issues that women experience. So that’s the core of the care delivery that we’ve been tweaking with the team from a client experience perspective.

“That is going to stay the same but our goal is to build a network of practices across the country in partnership with the leading providers in each market. So we’re actually on track to open up San Francisco later this year… and have plans to expand within California and the country in person.”

On the tech side they’re focusing on building “customization around the care delivery experience” — which boils down to building a platform that serves the target female users with “the right education and fitness and exercise content”, as part of an overarching care delivery package.

Origin’s founder clinic is a long-standing LA business, called Bebé Physical Therapy. The team started working with this practice in late 2018, with a formal partnership following on last year. While the clinic’s original founder has left, the entire clinical team was retained — and Origin gained an existing loyal client base. (They say they’ve treated “thousands” of women in Los Angeles and have more than 250 referring providers, such as OB-GYNs, at this stage.)

“For us it was this really big moment of realizing there is this care delivery model that really works,” says Carmy, explaining the startup origin story. “The research shows that physical therapy is the first line of defense for every pelvic floor disorder. But there’s not enough access to these types of providers in a way that makes sense for the modern woman.”

“We really believe in building a clinical-first company,” she adds. “So for us it was really important to partner with really the best team in Los Angeles.”

Origin is angel funded at this stage, with the team taking an undisclosed amount of financing from investors including Assaf Wand, CEO and co-founder Hippo Insurance; Jenny Fleiss, co-founder of Rent the Runway; Josh Zad, founder & CEO of Alfred Inc.; and several others, including some individuals specifically focused on the healthcare space.

“Now profitability is sexy,” jokes Carmy, when asked about its approach to financing the business and whether it’s looking to go down a typical startup VC funding route or not. “For us, we’ve always wanted our locations to be profitable. I think it’s the most important thing to control your own destiny. Really focus on building a sustainable business from day one has been our goal.”

While bricks-and-mortar clinics where women can go for personal, physical, and potentially very intimate therapy are clearly a vital component of such a service, Carmy argues there’s plenty of good work that can be done virtually to support women with their health issues.

She says one major component to tackle when targeting women’s health is simply awareness and education — given how relatively overlooked the area is. And of course there’s no barrier to imparting knowledge over a Zoom call (albeit that particular videoconferencing tool’s platform’s security is something the Origin team may want to take a closer look at).

“So much of what we offer can be done remotely,” says Carmy. “And I think, especially if you’re a busy working mother, to be able to come into the clinic every week is not always feasible. So we do think you can actually achieve better outcomes and better adherence if we have continuous care online and in person.”

“A lot of patients are coming to us with issues that have never been named before,” she adds. “So some of the core value we offer is actually providing medical validation — there’s a medical diagnosis and there’s a plan and there’s something we can do about it,” she adds.

“How women understand what’s going on with their bodies. And that’s not just in one session — that’s really over time, increasing body awareness and knowledge that women have so that they can also take care of themselves better in the future. That happens in every visit and can happen online.” 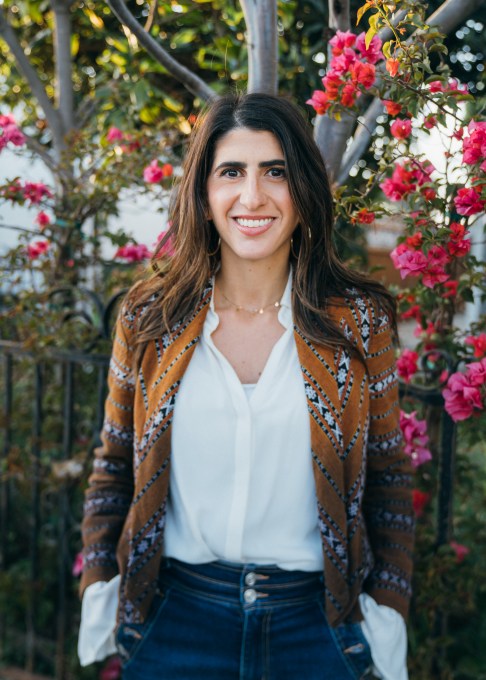 Carmy has a background in digital marketing but a very personal interest in women’s health after suffering painful sex during her twenties. She recounts the frustration of having to see multiple doctors before finally being able to get effective treatment for the problem.

While her long time friend and co-founder, Nona Farahnik Yadegar, suffered similar health issues after delivering her son — which led her to the Bebé Physical Therapy practice. Inspired, the friends joined forces to set up Origin, enlisting the help of Farahnik Yadegar’s husband, David, as their third co-founder.

“Pregnancy and postpartum, particularly postpartum, women’s needs are fundamentally ignored after they deliver,” Carmy continues. “We’re expected to just kind of ‘snap back’ — which is this huge fallacy which creates a whole set of other emotional issues and challenges as we try to live our lives.

“There’s a huge need. There’s a historical gender bias in medicine — but there has to be a way to solve this.”

It looks like a timely moment to build such a platform, with telehealth seeing a huge demand spike as a result of the coronavirus. While femtech, as a category, is now well established — commanding an increased share of attention from VCs who have historically lagged on understanding the opportunities for products and services that cater to women’s health (given their own gender bias problem).

Where women’s health is concerned the penny of opportunity does seem to be dropping. Not just for businesses narrowly focused on fertility, either, but for founders who are thinking far more holistically about women’s issues and well-being (including very overlooked yet universal transitions such as the menopause).

The Origin team’s decision to accelerate launching their telehealth platform actually occurred before a COVID-19 triggered shift in US regulations — which has nonetheless helped their accessibility mission by opening up digital healthcare platforms for insurance coverage, including for physical therapy.

“My hope is that this continues, even beyond whatever crisis period we’re in right now,” says Carmy, noting how physical therapy was one of the last areas to be covered for telehealth.

Origin contends that its approach to women’s health and physical therapy prevents and treats conditions that costs the system “billions of dollars across maternity and MSK” — by reducing unnecessary surgeries; improving musculoskeletal outcomes; and also by supporting women at work, thereby reducing absenteeism and promoting postpartum return.

“We’ve systemically ignored many parts of women’s bodies. There’s so much more research on erectile dysfunction than there is on female sexual pain,” Carmy adds, discussing why the insurance industry has also historically failed to pay proper attention to women’s health. (She notes, for example, that the Bebé Physical Therapy practice is an exception in Southern California in accepting insurance for this type of therapy.)

“If the medical community is telling you, through their actions, by only getting one visit six-weeks postpartum or by me needing to see six doctors to figure out what’s wrong with my pelvic floor, which is a large part of my body,  even I think that this is maybe ‘normal’ or not an issue.

“The number of women I’ve talked to who assume that leaking or incontinence is just something that happens to all women after they give birth and can’t be dealt with… So I think we’ve normalized what is probably one of the largest healthcare issues in the country. That is maybe not an acute issue causing a tonne of surgeries but it really is if you look at pelvic organ prolapse.

“One in two adult women experience some level of prolapse and surgery is still perceived to be ‘the option’. And even with surgery you need physical therapy so…”

There’s respected science underpinning physical therapy as an effective treatment for a range of women’s health issues (Carmy, for example, points to this Stanford study on pelvic floor dysfunction). But, at the same time, the historic failure of the medical research community to focus on women’s health issues means there’s an ongoing paucity of data — which is something Origin hopes to be able to treat in time.

“We’re one of the only practices, we’re seeing thousands of visits a months, so we’re able to actually have a very large population that, hopefully in partnership with a research institution, we can actually show the real value of what’s being done — especially from a prevention stand point,” says Carmy.

“I think that’s where healthcare is going,” she adds, on the dual-sided — online, offline — nature of the business: In person physical therapy supplemented by ongoing online care, where therapists treat patients in their homes (and can even, therefore get a peek at extra environmental context, by getting eyes on a patient’s surroundings, that might be useful for further customizing physical treatments).

Another healthcare trend that’s clearly signalled by a startup like Origin is that women are increasingly rejecting a male-skewed status quo within medicine — and making it their own business to take better care of women.