As Harley-Davidson rounds year one on its electric debut, we’re still riding in the fog on how to evaluate the company’s EV pivot.

The LiveWire has received mostly positive reviews from motorcycle stalwarts on design, features and performance. Two things are missing, however, to offer an initial grade on Harley-Davidson’s first production e-moto and overall commitment to electric.

The company needs to release EV-specific sales data and tell us what’s next in its voltage-powered lineup.

Seven months out from the LiveWire debut, there’s been plenty of speculation on how the motorcycle’s fared in the marketplace, particularly with pricing just short of Tesla Model 3.

As a publicly traded company, I was hoping Harley would offer EV data in its end of year and first-quarter 2020 financials.

We didn’t see that. Harley-Davidson’s reporting on motorcycle sales doesn’t include a separate line for electric. Instead, LiveWire units sold are folded into Harley’s “Cruiser” stats that include some 16 different motorcycle models across HD’s Softtail and CVO lines. From the numbers, it’s evident sales in that category fell for Harley-Davidson over 2019, but it’s not possible to know how Harley’s EV debut performed on sales floors.

I checked with a Harley-Davidson spokesperson, who confirmed the company hasn’t released any LiveWire-specific sales data in any form. 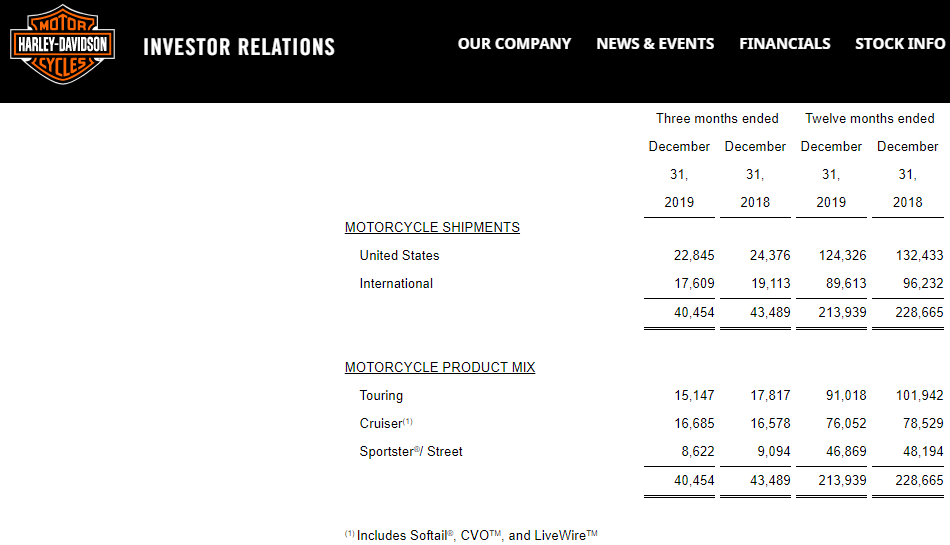 Without this info, we’re left to speculate from incomplete dealer feedback that’s made its way to press, including an October Reuters piece pinning LiveWire as a “flop” with buyers. To be fair, it’s difficult to find reliable e-moto statistics anywhere, as the main source of motorcycle buying data in the U.S. — the Motorcycle Industry Council — doesn’t compile or release them.

But Harley-Davidson could and should give the public a better benchmark on the progress of its electric products by releasing EV-specific sales numbers.

The move to create an electric mobility line has been a bold one for the Milwaukee-based company — which has been steeped in the tradition of creating distinctly loud, powerful, internal combustion two-wheelers since 1903.

With the LiveWire debut, Harley-Davidson became the first of the big gas manufacturers to offer a street-legal e-motorcycle for sale in the U.S.

The move is something of a necessity for the company, which, like most of the motorcycle industry in the U.S., has been bleeding revenue and younger buyers for years.

The U.S. motorcycle market has been in pretty bad shape since the last recession. New sales have dropped by roughly 50% since 2008 — with sharp declines in ownership by everyone under 40 — and never recovered. 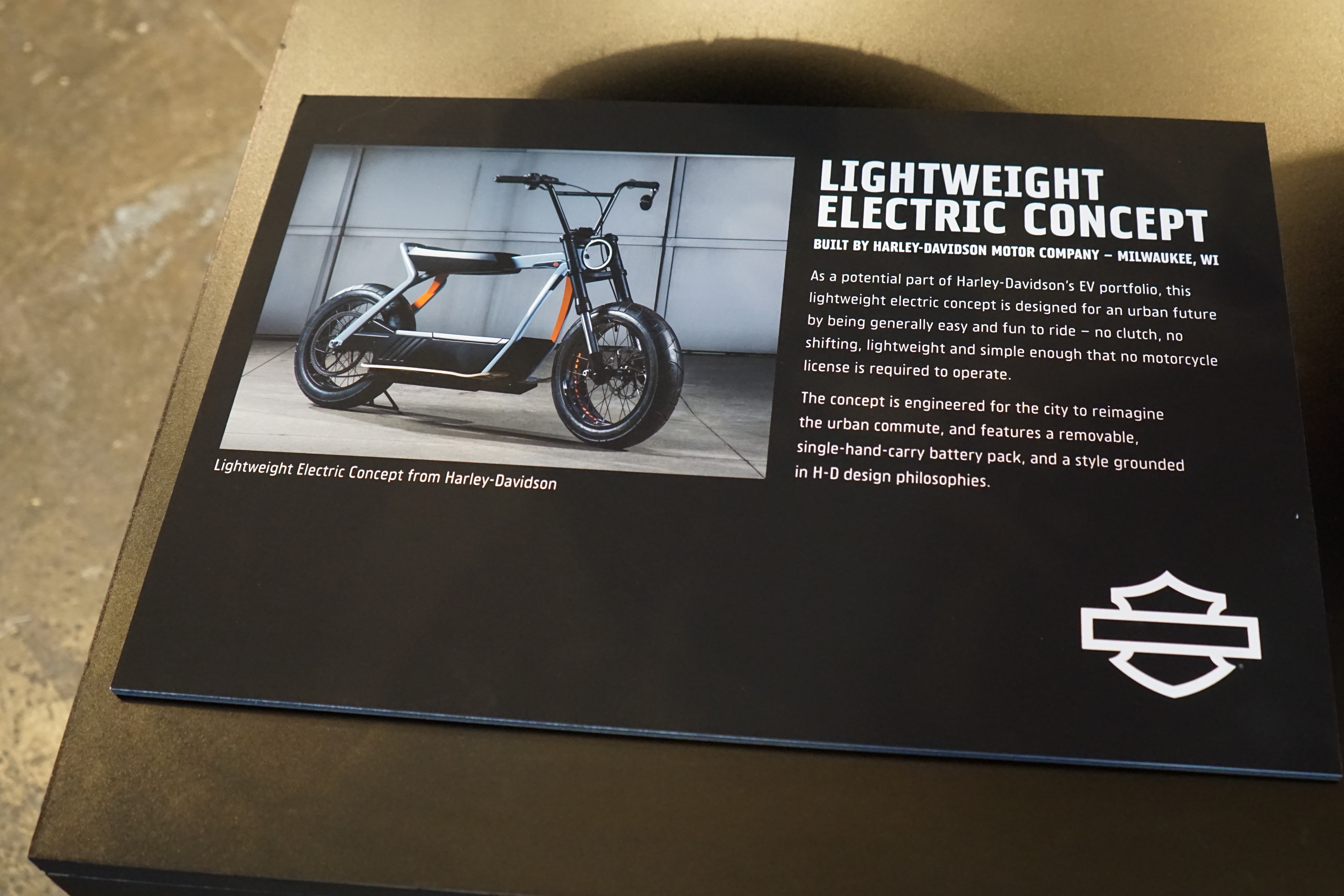 Execs at Harley-Davidson have spoken about the LiveWire, and the company’s planned EV product line, as something to reboot HD with a younger generation in the on-demand mobility age.

While Harley got the jump on traditional motorcycle manufacturers, such as Honda and Kawasaki, it’s definitely not alone in the two-wheeled electric space.

Harley-Davidson entered the EV arena with competition from several e-moto startups that are attempting to convert gas riders to electric and attract a younger generation to motorcycling.

One of the leaders is California startup Zero Motorcycles, with 200 dealers worldwide. Zero introduced a LiveWire competitor last year, the $19,000 SR/F, with a 161-mile city range, one-hour charge capability and a top speed of 124 mph. Italy’s Energica is expanding distribution of its high-performance e-motos in the U.S.

Harley-Davidson, e-moto startups and all the big manufacturers now face growing uncertainty on the buying appetite for motorcycles that could persist into 2020 — and beyond — given the economic environment created by the COVID-19 pandemic.

This month Harley-Davidson appointed a new CEO, Jochen Zeitz, to lead the company into the future. On last month’s first-quarter earnings call, Zeitz didn’t offer much insight on HD’s EV sales or future, except to say, “We also remain committed to…advancing our efforts in electric.”

Without knowing how the LiveWire did in the ultimate product test — getting folks to give up money and buy one — there is some scorecard feedback to register on Harley’s electric debut.

To start with the negative, the company really missed the mark on the $29,000 price. The messaging on the price and product placement has shifted a bit since I first started talking to HD about LiveWire. In July 2019, Harley execs gave the “premium product” jingle on how the $30K price was justifiable over comparable e-moto offerings, such as Zero’s SR/F, priced $10,000 less.

More recently a Harley-Davidson spokesperson (commenting on background) described the LiveWire as a halo product — more of an attention-getting model, and not priced for mass-market. Whatever actually went into the EV’s pricing, the consensus of just about everyone I’ve spoken to on the LiveWire is that it was priced too damn high.

On the thumbs-up side, Harley-Davidson did nail a lot of important factors on its electric debut. The company had a difficult task of creating something that bridged two worlds, at least in attributes and public response. The bike had to check out in features and performance as a legitimate e-motorcycle entrant. The LiveWire also had to pass the sniff test with Harley’s existing clientele — who are loyal to American-made chrome and steel cruisers and aren’t exactly the Tesla, EV crowd. 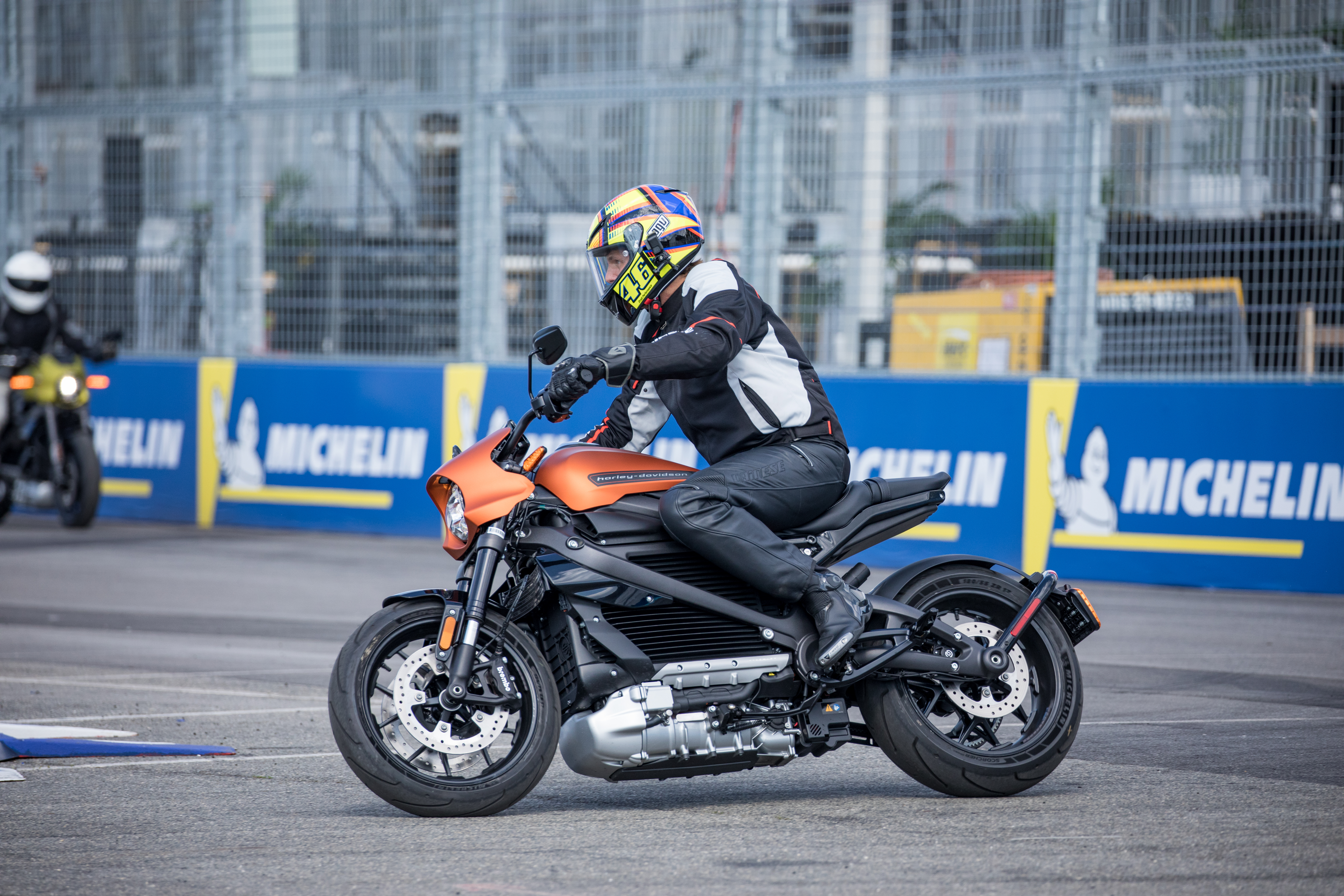 Price and unknown sales numbers aside, I’d say Harley-Davidson achieved both. I spent a day testing the 105 horsepower LiveWire on a track and pestering HD’s engineers on all the bike’s features, including range (95 to 146 miles) and charge time (60 minutes). Overall, I found it to be a solid package across performance, design and key specs. Most of the motorcycle press has agreed.

HD also succeeded in engineering an e-motorcycle in a Harley-Davidson way, including styling and creating a distinct, yet subtle, sound for its EV. I showed some LiveWire photos to my grandpa — a loyal loud-pipes Harley rider since the 50s — and he responded favorably, saying he’d love to try one out. So HD’s electric debut did arouse the right kind of response and enthusiasm with the right crowds, which is something to build on.

What HD has to do now with its electric program is show us what’s next.  And whatever the company launches, it must sell to a wider audience, including millennials.

I could envision the company’s next EV product release including a scooter offering — registering Harley in the urban mobility space — and an affordable e-motorcycle with broad market appeal.

And what could the spec sheet look like for Harley’s next e-motorcycle? I see it as something priced around $10,000, lighter and more accessible to beginner riders than the 549-pound LiveWire, cloud and app connected with at least 100 miles of range and a charge time of 30 to 40 minutes. A tracker-styled EV channeling Harley’s flat-track racers — with some off-road capability — could also help HD hit the mark. Harley released a mock-up to this effect, in its concepts last year.

Of course, getting it all right on specs, style and price point will be even more critical for Harley-Davidson in a COVID-19 economic environment, where spending appetites for things like motorcycles will be more conservative for the foreseeable future.

The LiveWire gave Harley Davidson’s commitment to electric credibility. Harley’s next round of two-wheeled EVs — and the market response — will tell us more about HD’s relevance in the 21st century mobility world.