As parents across the country are tasked with managing their children’s schooling amid a pandemic, investors are betting on a homeschooling startup that’s aiming to provide parents with services that can simplify the process of giving their kids a tailored education at home.

Founder Ryan Delk says his startup Primer is building the “full-stack infrastructure” that parents need to homeschool their kids, an interactive suite of products that he hopes can “make homeschooling a mainstream option for families.”

His company shared funding details with TechCrunch, disclosing that his startup had closed a $3.7 million seed round led by Founders Fund. Other investors in the round include Naval Ravikant, Cyan Banister and Village Global.

As of 2016, about 2.4 million kids in the United States are homeschooled. Delk says that he’s been “stunned by the lack of infrastructure” available today for parents interested in homeschooling their kids. Delk was homeschooled by his parents from kindergarten through eighth grade, an experience he looks back on fondly, he says.

Primer isn’t offering a dedicated curriculum. So far, they’ve been building tools to help parents acquaint themselves with what’s out there. Primer has already rolled out a pair of free homeschooling resources for parents, including Navigator, a tool to help parents stay compliant with state regulations for homeschooling their kids, as well as Primer Library, a collection of free digital instruction materials. 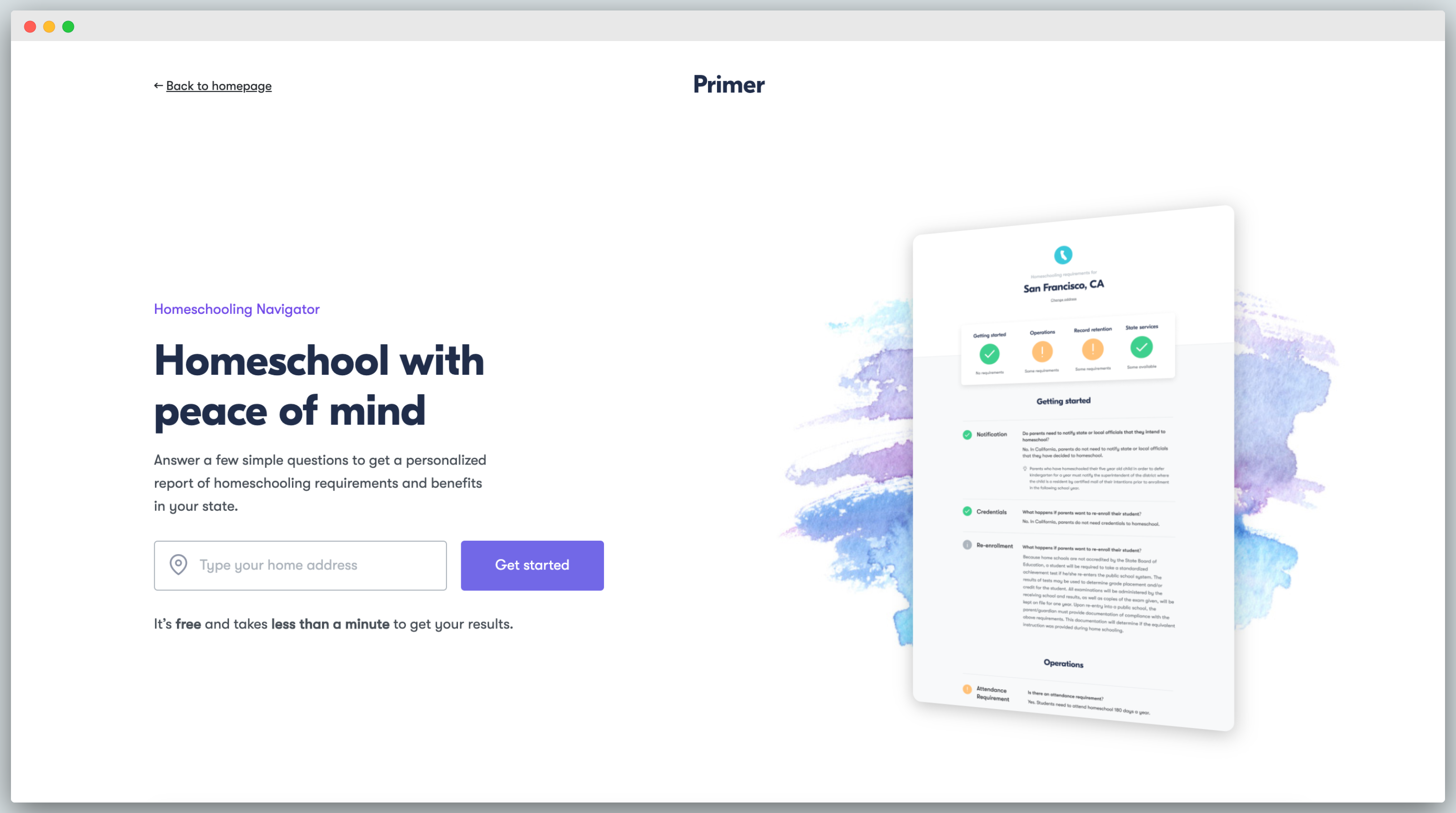 Since launching its compliance and library tools late last year, the team has been prepping for their next launch, a series of interest-based communities that homeschoolers can join and participate in online. The communities will begin rolling out this August in time for a new school year. Delk says the team is hoping to launch about 5-7 different classes, spanning topics like “rockets, chess and baking,” with instruction from experts and interactions with other students. Primer hasn’t finalized pricing, but the team plans to charge a monthly subscription fee for membership to the communities.

Today, the startup is launching a waitlist for this feature. In a blog post, Delk notes that next year he hopes to launch “several more products that deliver everything parents need to give their children an exceptional homeschooling experience.”

Delk believes that there’s going to be a “huge influx” of new homeschoolers as shelter-in-place winds down and some parents find that homeschooling is something they’d like to pursue long-term. He notes that the products his team is creating are still pretty high-touch for parents and that it isn’t the right fit for everyone, much like homeschooling.

“It’s going to be very hands-on and we’re going to be upfront about that,” Delk says. “We are not building a plant-your-kid-in-front-of-an-iPad-for-six-hours product.”

As lockdowns stretch on, is edtech passing or failing?