Google today is launching a new app, Read Along, that aims to help elementary school students practice their reading skills and stay educationally engaged amid school closures due to coronavirus. The new Android app is based on Google’s existing application, Bolo, which launched in India last year with a catalog of read-along stories in both English and Hindi. The updated and rebranded version is now globally available with support for nine languages.

Like Bolo, Read Along leverages Google’s speech recognition and text-to-speech to help kids learn to read.

The app includes a built-in reading assistant named Diya. As kids read aloud, Diya detects if the child is struggling with a passage and can jump in with positive reinforcement or help. At any time, the child can ask Diya to help them read a sentence or pronounce a word they don’t know.

As children progress in the app, they’re presented with mini word games and earn in-app prizes as they improve their skills. 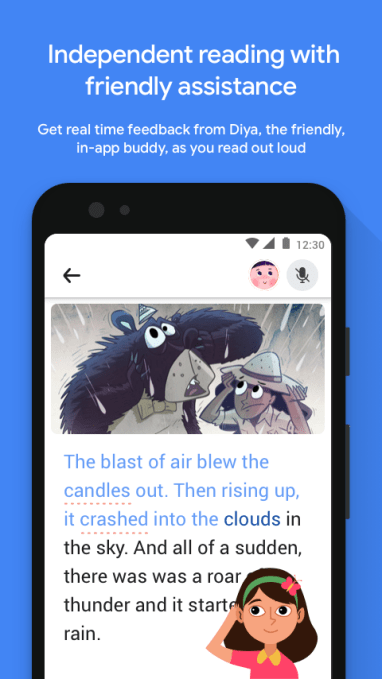 Google says the app was built with children’s privacy in mind and is able to work without either Wi-Fi or data. The voice data is analyzed in real-time on the device, and is not synced, stored or analyzed on Google’s servers. The company also stresses that it’s not using a voice sample from the kids to make the product better.

The app doesn’t include advertising or in-app purchases, either. Parents can opt to connect to the internet if they want to download additional stories, but there isn’t a charge.

At launch, Read Along offers around 500 stories and the catalog is continually expanded with new books.

Since its debut as Bolo in March 2019, Google says feedback from parents was encouraging, prompting it to bring the app to new markets. While in India “Bolo” is broadly understood to mean “speak,” Google rebranded the app to Read Along to resonate with parents and children around the world. The app has also been updated with an enhanced library, new games and other user interface improvements since launch.

The new Read Along app is now globally available, except in the Philippines, Colombia and Denmark, and offers stories in English, Spanish, Portuguese, Hindi, Marathi, Bengali, Tamil, Telugu and Urdu.

The app is a free download on Google Play for children ages 5 and up.