In spite of their protected status under international laws, pangolins remain one of the most trafficked animals in the world — and at least some of that trade is taking place right out in the open on Facebook.

A new report from tech watchdog group the Tech Transparency Project details how Facebook users are engaged in the sale of illegally trafficked pangolin parts, even though the practice is illegal and prohibited by Facebook itself.

In one example, a public page of Facebook called “Pangolin Scales for Sale in Vietnam” advertised the sale of the forbidden animal products, asking potential buyers to send a message to the seller over WhatsApp or email.

Another public Facebook page, “Rhino Horns And Pangolin scales For sale In China,” was created in March and directed customers to “embrace our businesses like never before” in the wake of the coronavirus. Other pages offered the sale of pangolin oils. Most of these sites were hiding in plain sight, easily found by using basic search terms like the Vietnamese word for “pangolin” or even the phrase “pangolins for sale” in English. 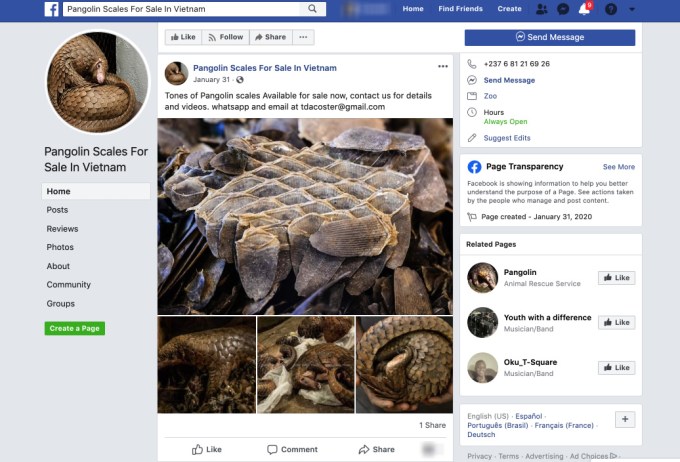 Facebook’s own platform rules prohibit the sale of live animals as well as anything that “promotes, encourages, or coordinates the poaching of endangered species and their parts.” The company joined an anti-wildlife-trafficking coalition in March of 2018, but since that date reports have detailed the ongoing sales of everything from hornbill parts to tiger teeth through ads and direct sales facilitated by the platform.

Pangolins are again in the spotlight right now as the global scientific community searches for answers about the pandemic’s origins. Wild animals carry coronaviruses and can transfer those potentially devastating diseases to humans, as is believed to be the case with a Chinese bat population and the 2002 SARS outbreak.

According to new research, some pangolins carry coronaviruses related to the one that causes COVID-19. Most scientists believe the novel coronavirus likely originated in bats, but how the virus spread from bats to humans is a mystery researchers are still seeking to understand.