Hi readers. Welcome back to The Station, a weekly newsletter dedicated to the future (and present) of transportation. I’m your host Kirsten Korosec, senior transportation reporter at TechCrunch.

While COVID-related stay-at-home orders have been extended in places like the San Francisco Bay area, officials in other counties and states in the U.S. have decided to open up for business. The rest of us are watching and waiting to see how these two experiments play out.

These opposing approaches have managed to create even more tension in the United States. If politics didn’t divide us before, how and when to open amid a health pandemic is proving to be an effective wedge.

The “how” is as important, or even more so, than the “when.” What will life and business look like? Wuhan, China, a transportation and manufacturing metropolis of 11 million people and where COVID-19 started, offers a view into one approach. (The photo below shows a worker disinfecting a bus in Wuhan on April 30.) 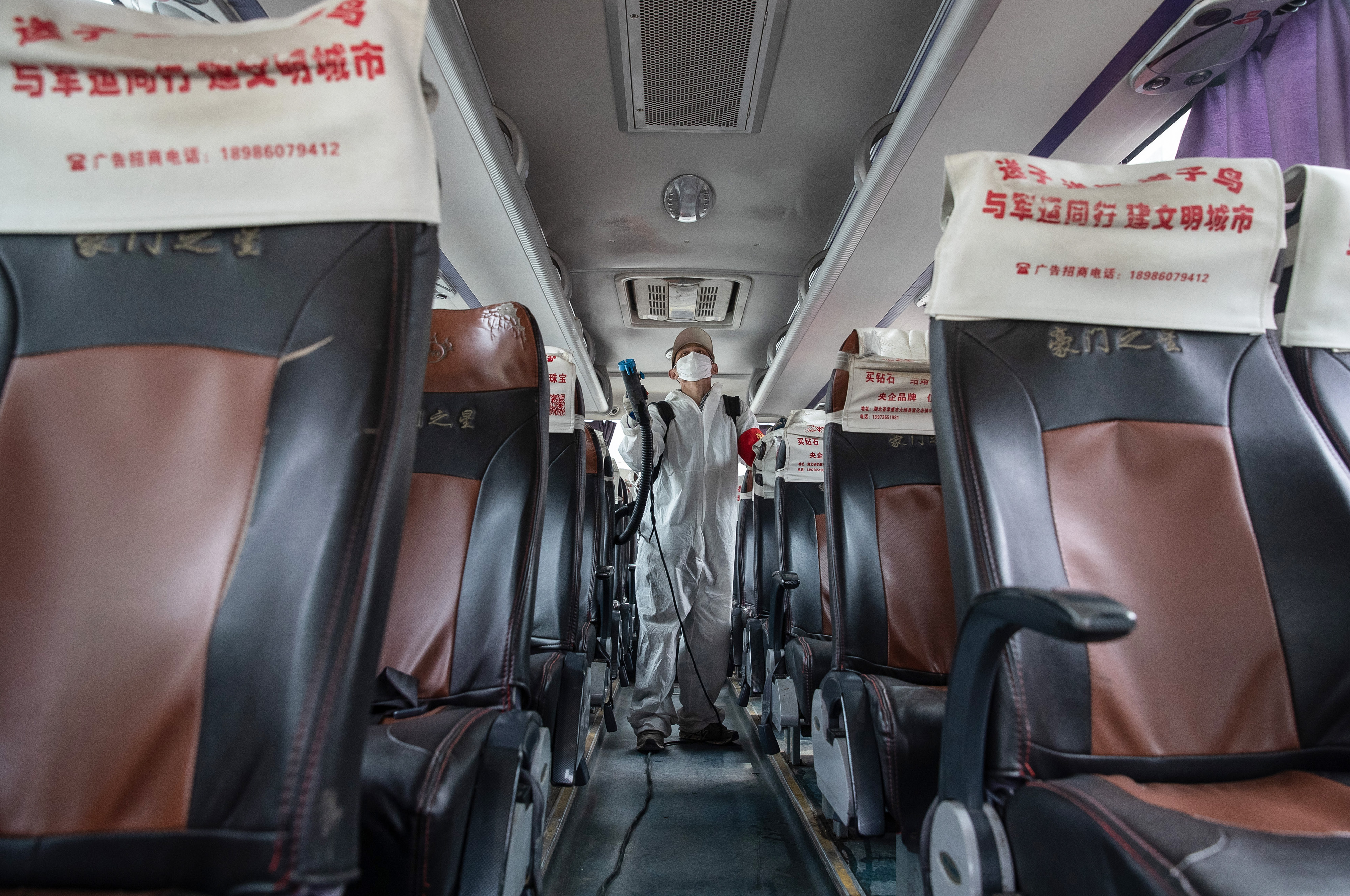 A staff member sprays disinfectant on a bus at a long-distance bus station in Wuhan in China’s central Hubei province on April 30, 2020, ahead of the Labor Day holiday which started May 1.

When those stay-at-home orders are finally lifted, returning to work won’t be quick or easy. Wuhan was placed on lockdown January 23. Wuhan officials eased outgoing travel restrictions April 8. While the strictest component of that lockdown has been lifted, many businesses remain closed. Didi didn’t reopen its ride-hailing services in the city until April 30.

In short, it’s going to be complex. Ford’s back-to-work playbook is a case in point. The plan includes a number of daily measures such as online health self-certifications completed before work every day, face masks and no-touch temperature scans upon arrival. But that’s just a sliver of what it will take. Check out their complete playbook.

Here’s a friendly reminder to reach out and email me at kirsten.korosec@techcrunch.com to share thoughts, opinions or tips or send a direct message to @kirstenkorosec.

Alrighty folks, shall we dig in? Vamos.

It was a rough week for micromobility. Over at Lyft, the company laid off 982 employees and furloughed 288 amid the COVID-19 pandemic. Lyft also permanently ceased scooter operations in Oakland, San Jose and Austin.

“We’re focusing our resources where we can have the biggest impact and best serve cities and riders,” a Lyft spokesperson said in a statement to TechCrunch. “We’re continuing to invest in our bike and scooter business, but have made the tough decision to shift resources away from three scooter markets and toward opportunities where we are set up for longer-term success.”

At Lime, the startup let go 13% of its staff while the very next day relaunching its electric scooters in Baltimore and Ogden, Utah.

“Almost overnight, our company went from being on the eve of accomplishing an unprecedented milestone — the first next-generation micromobility company to reach profitability — to one where we had to pause operations in 99% of our markets worldwide to support cities’ efforts at social distancing,” Lime CEO Brad Bao wrote in a note to employees.

Just one day after those layoffs, the company relaunched scooters in Baltimore to help support essential medical workers, as well as in Ogden.

Uber is weighing its own layoffs. The Information reported that the company could cut up to 20% of its staff. That translates to more than 5,000 jobs. Those cuts could be announced in stages over the next several weeks. Meanwhile, Thuan Pham, who was hired as Uber’s chief technology officer by former CEO Travis Kalanick back in 2013, is leaving the company in three weeks, the rideshare giant revealed in an SEC filing.

Chinese electric vehicle startup Nio secured a $1 billion investment from several state-owned companies in Hefei in return for agreeing to establish headquarters in the city’s economic development hotspot and giving up a stake in one of its business units.

Why deal of the week? The deal alleviates some concerns about Nio’s liquidity. It also marks the latest Chinese EV startup to turn to the state as private capital has shrunk.

There is no free lunch, however. The deal itself is complex and involves some asset shuffling. Nio is transferring its core businesses in China into a new company called Nio China. The investors will get a 24.1% stake in Nio China. The shareholding structure of the parent company is unchanged.

Other deals announced this week are below. Keep in mind that just because a deal is announced doesn’t mean it closed amid the COVID-19 pandemic. Fundraising rounds often close weeks and even months before they’re announced.

The company has a software platform that captures and anonymizes vehicle data so it can then be used to create apps to provide services such as electric vehicle management, subscription-based fueling, parking, mapping, usage-based insurance and emergency service.

KlearNow, a startup that has built a software platform to automate the customs clearance process, raised $16 million in a Series A funding round led by GreatPoint Ventures, with additional participation from Autotech Ventures, Argean Capital and Monta Vista Capital. Ashok Krishnamurthi, managing partner at GreatPoint Ventures, will join KlearNow’s board. Daniel Hoffer from Autotech Ventures is joining as a board observer.

Skycell, a Switzerland-based startup that builds hardware and operates a logistics network designed to transport pharmaceuticals, has raised $62 million.

A merger between U.K.’s JustEat and the Netherlands’ Takeaway.com has been approved by regulators. The merged company announced that it had raised €700 million ($756 million) in new outside funding in the form of new shares and convertible bonds.

Cheetah, a San Francisco-based startup that provided a wholesale delivery service and has pivoted to selling to consumers during COVID-19, raised $36 million in Series B funding.

Innovation of the week

Computer vision company Eyesight Technologies has tweaked its driver monitoring system so it can detect driver distraction and drowsiness even while wearing a medical face mask.

This “innovation of the week” gets back to my opening remarks about “how” we get back to work. Face masks will likely be a part of our world for some time.

Driver monitoring systems, which are increasingly being used by commercial fleets, are trained to detect and monitor facial features of the driver. The system will take in data points like head pose, mouth, eyes and eyelids and use the gathered visual data to detect signs of drowsiness and distraction. If the sensor can’t read one or more of these features the system could fail to detect a drowsy truck driver or inattentive transit worker.

Eyesight Technologies says that its computer vision and AI algorithms have been trained to detect distraction and drowsiness even if a driver is wearing a mask and glasses.

“We are living in unprecedented times,” Eyesight Technologies CEO David Tolub said. “Without a concrete end date to the current situation, wearing medical masks may be a reality for the foreseeable future. Eyesight Technologies is forging ahead and adapting to provide a reliable solution to help guarantee safety even under less than ideal circumstances.”

Audi has scrapped plans to roll out a Level 3 automated driving system in its A8 flagship sedan. Automotive News Europe broke the story.

The feature, which is branded Traffic Jam Pilot, theoretically allows the vehicle to operate on its own without the human driver keeping their eyes on the road. But it’s never been commercially deployed.

Traffic Jam Pilot was supposed to be in the latest-generation A8 that debuted in 2017. It’s now 2020. What happened? Regulations, or lack thereof, have been the primary scapegoat. But it’s not quite the whole story.

TechCrunch reached out to Audi to dig into why. In short, the company told us that it’s complicated. The lack of a legal framework has raised concerns about liability. To further complicate the problem, the A8 is now progressing through its generational life cycle. And Audi was faced with continuing to pour money into the feature to adapt it without promise of framework progressing.

Here’s a few tidbits from the folks at Audi.

On the legal framework:

As of now, there is no legal framework for Level 3 automated driving. Consistently it is not possible to homologate such function anywhere in the world in a series production car. It is still very challenging to plan the exact introduction scenarios for level 3 systems, as we continuously moving in an intensive interplay between the findings from ongoing testing and the requirements that legislators and approval authorities are now defining for conditional automated driving.

As these clarifications and safeguards continue to take time, we also monitor economic aspects in addition. This includes development costs, which are summing up continuously. Secondly, the remaining life of the determined target model A8 combined with the forecasted installation rate and the expected market greediness in the individual countries are playing an important role.

This has brought us to the following decision: We will not see the traffic jam pilot on the road with its originally planned level 3 series function in the current model generation of the Audi A8 because our luxury sedan has already gone through a substantial part of its model life cycle.

We still believe in the technology of automated driving and today we know better than almost anyone when it comes to the decisive technological key factors. During the development phase we continuously learned more and more technical “unknown unknowns” and developed approaches how to handle the fact, that there will appear more.

Together with the above mentioned dependencies concerning legislation and type approval, we believe that actually it is not the right moment to deliver the function to the customer. This is our attitude of responsibility.

How Audi is moving forward:

An important part of the truth, which the industry is now facing: development of automated driving is extremely complex and cost-intensive. Our aim more than ever before is to generate the greatest possible synergies.

Within the VW group we therefore have the best preconditions. We have consolidated our efforts to further develop level 3 automated driving in the Car.Software organization. This is a new organization within the Volkswagen Group.

Former Audi managers will be head of two out of the five domains within this new organization: Thomas Müller will manage the automated driving area, and Dr. Klaus Büttner will manage the Intelligent Body&Cockpit area. Together with the specialists coming from Audi, Volkswagen and Porsche, this ensures that the current expertise in this cross-brand organization is available for the greatest possible benefit to everyone in the Volkswagen Group.