If you’ve got kids with you through this stay-at-home stretch, there’s a good chance you’re running low on new ways to keep them entertained. All the coloring pages have been colored in; the freeze dances frozen; the stickers stuck.

Good news! Your iPhone is now a cat (congratulations!)

You need to help your new cat friend find somewhere to hide. Then everyone else in your house – like the toddler who somehow has an incredible amount of energy going into this 17th week of March – can try to find it, calling out “Here kitty!” and listening for a meow in response.

That’s the idea behind the aptly named “Here Kitty!”, the latest title from the team at Impending. You’ve probably seen some of Impending’s other stuff, like the super popular party/waiting-in-line-at-Disneyland guessing game Heads Up!, or the minimalist todo app Clear. Their stuff is always deeply polished, and this one is no exception.

Once you’ve found a good spot, you “hide” the kitty by placing your phone face down. It’ll meow (or, occasionally, hiss – it is a cat, after all) when it hears you call out. Found kitty? Flip the phone back over to reveal how long it took, and you’ve won! It’s like a gadget-enabled mashup between hide-and-seek, hot/cold, and Marco Polo minus the need for a pool. 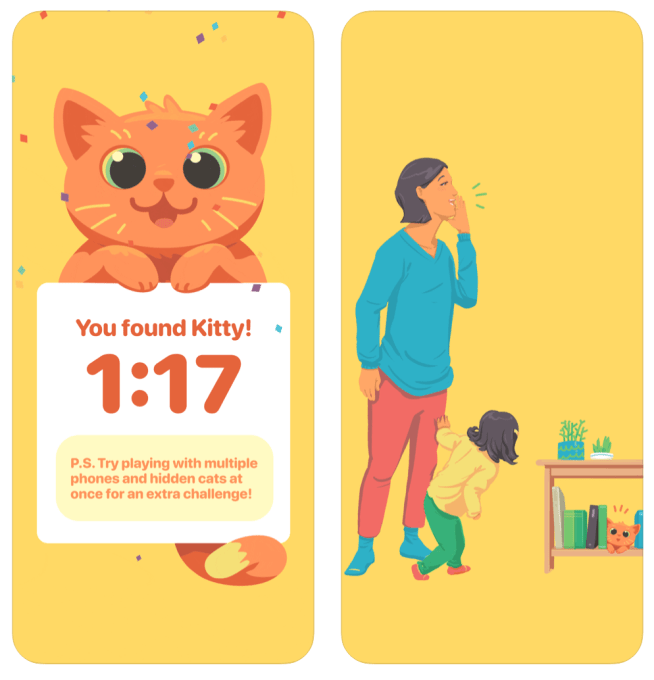 Want kitty’s meows to be a bit softer to make it a bit more challenging, or louder for a younger audience? Adjust the difficulty slider accordingly.

Impending says they’ll introduce a “new friend” to seek alongside the original kitty every Saturday.

I’ve been playing with an early build of Here Kitty! for a few weeks, and… well, it’s just adorable. Impending rates the game at ages 4 and up, but give it a spin even with younger ones; my kid is a few months shy of two years old but he totally (read: mostly) gets it. He doesn’t quite get how to call for the kitty on his own, but quickly figured out how to follow the sound and cackles like a mad man every time he finds the cat. (Pro tip, as learned the hard way: if you’re playing with a toddler, put a case on your phone.)

Impending CEO Phill Ryu says they initially prototyped the idea a few years ago as something that would require an Apple Watch; for the sake of everyone stuck at home right now, they returned to the concept, simplified it a bit, and got it shipped within just a few weeks.

Here Kitty! is out right meow now for iOS (Sorry, Android users), and is free to play.