Ali Amin-Javaheri grew up in the chemicals business.

His father had worked for Iran’s state-owned chemical company and when the family fled the country in the nineteen eighties during the Iran-Iraq war, they first settled in Houston where employers welcomed the senior Amin-Jahaveri’s experience.

Houston in the 80s was dominated by the petrochemicals industry and by the time the family later relocated to Washington State, Amin-Jahaveri was already deeply steeped in a world of covalent bonds, chemical cracking, and the molecular coupling and decoupling of matter.

For the former Texas chemical kid, moving to tech-heavy, rain-soaked Washington, dominated at the time by Microsoft, was a bit of a shock, the founder recalled. But it was the 2000s and everyone was in tech so Amin-Jahaveri figured that’d be his path too.

Those two worlds collided for the young University of Washington graduate in his very first job — his only job before launching his first startup — as a programmer and developer at Chempoint.

“Completely through happenstance I was walking around a certain part of Seattle and I walked by this building and it had all these logos outside the office. I saw this logo for a company called Chempoint and I was instantly intrigued,” Amin-Jahaveri said. “I walked up to the receptionist and asked what they were doing.”

In the summer of 2001, Amazon was an online bookseller a little over seven years old, the dot-com boom hadn’t gone completely bust quite yet and business-to-business marketplaces were a hot investment.

“It was a startup with just a handful of folks,” said Amin-Jahaveri. “There wasn’t a business model in place, but the intent was to build a marketplace for chemicals… The dot-com boom was happening and everything was moving on line and the chemicals industry likely will as well.”

Fifteen years later, Chempoint is one of the last remaining companies in a market that once boasted at least fifteen competitors — and the chemicals industry still doesn’t have a true online marketplace. Until (potentially) now, with the launch of Amin-Jahaveri’s first startup — Knowde. 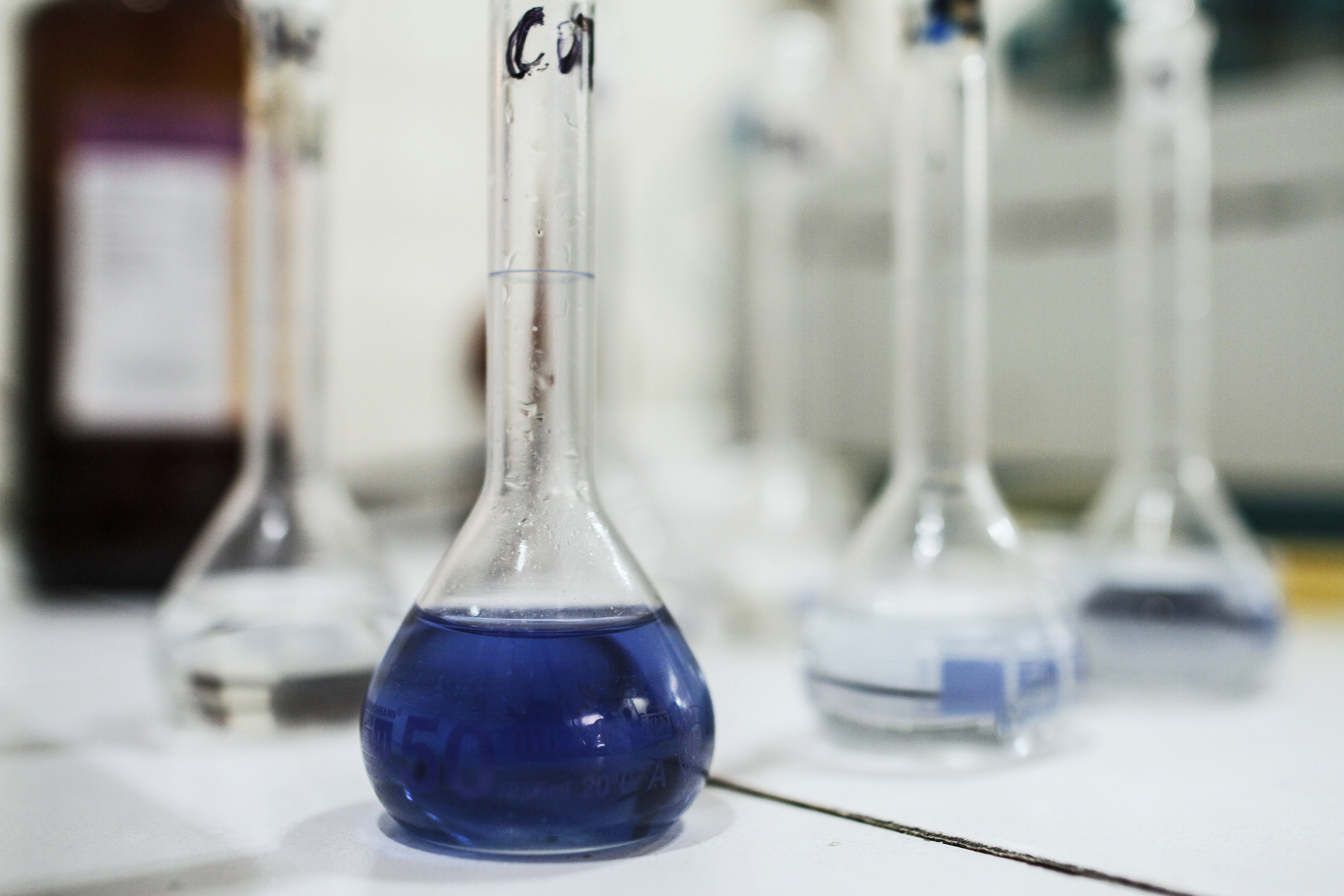 A volumetric flask, used during the process of determining phosphorus content in crude edible oil, sits in a laboratory of the quality assurance department at the Ruchi Soya Industries Ltd. edible oil refinery plant in Patalganga, India, on Tuesday, June 18, 2013. Photographer: Dhiraj Singh/Bloomberg via Getty Images

For the vast majority of Americans, the chemicals industry remains a ubiquitous abstraction. Consumers have a direct relationship with the energy business through the movements of prices at the pump, but the ways in which barrels of oil get converted into the plastics, coatings, films, flavors, fillings, soaps, toothpastes, enamels and unguents that touch everyone’s daily life are a little bit less obvious.

It’s a massive industry. The U.S. accounted for 17% of the global chemicals market in 2017 and that percentage amounted to a staggering $765 billion in sales. Worldwide there are thousands of chemicals companies selling hundreds of different specialty chemicals each and all contributing to a total market worth trillions of dollars.

“The market is $5 trillion,” said Amin-Jahaveri. “Just to be super clear about that.. It’s $5 trillion worth of transactions happening every year.”

It’s no secret that venture capitalists love marketplaces. Replacing physical middlemen with electronic ones offers efficiencies and economies of scale that have a cold logic and avoid the messiness of human contact. For the past twenty years, different entrepreneurs have cropped to tackle creating systems that could connect buyers on one side with sellers on another — and the chemicals industry has been investors’ holy grail since Chempoint made its pitch to the market in 2001.

“The chemicals industry is the most interesting of all of them. It’s the biggest. It’s also the most fragmented,” said Sequoia partner Shaun Maguire. “There were three companies in the world that all did about $90 billion in sales and none of those three companies did more than 1.6% of sales of the entire industry.”

Those kinds of numbers would make any investor’s jaw drop. And several firms tried to make a pitch for the hotly contested financing round for Knowde. Maguire first heard that there was a company looking for funds to pursue the creation of the first true marketplace business for the chemicals industry through a finance associate at Sequoia, Spencer Hemphill.

Hemphill knew an early Knowde investor named Ian Rountree at Cantos Ventures and had heard Rountree talk about the new company. He flagged the potential deal to Maguire and another Sequoia partner. It only took one hour for Maguire to be blown away by Amin-Jahaveri’s pedigree in the industry and his vision for Knowde.

From that initial meeting in September to the close of the company’s $14 million Series A round on March 11 (the day the markets suffered their worst COVID-19-related losses), Maguire was tracking the company’s progress. Other firms in the running for the Knowde deal included big names like General Catalyst, according to people with knowledge of the process.

The tipping point for Maguire was the rapid adoption and buy-in from the industry when Knowde flipped the switch on sales in early January. 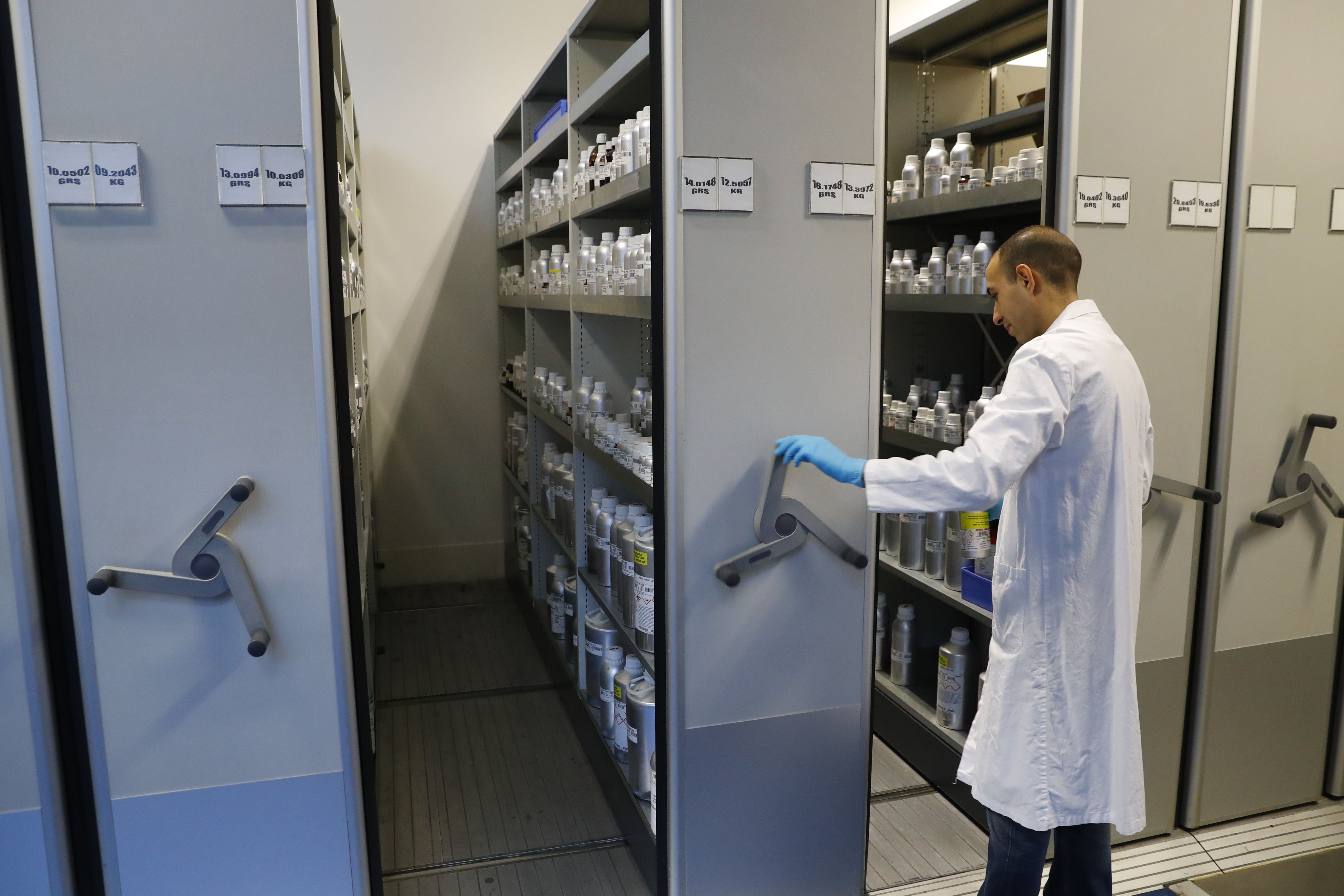 An employee of International Flavors and Fragrances (IFF) picks up perfume components on December 8, 2016 at the company’s laboratory in Neuilly-sur-Seine, near Paris. / AFP / PATRICK KOVARIK (Photo credit should read PATRICK KOVARIK/AFP via Getty Images)

For at least the past fifty years, the modern chemicals industry has been defined — and in some ways constrained — by its sales pitches. There are specialty manufacturers who have hundreds of chemicals that they’ve made, but the knowledge of what those chemicals can do is often locked inside research labs. The companies rely on distributors, middlemen, and internal sales teams to get the word out, according to Maguire and Amin-Jahaveri.

“The way that things are done is still through field sales teams and product catalogs and brochures and face to face meetings and all that stuff,” said Amin-Jahaveri. “This industry has not evolved as quickly as the rest of the world… And we always knew that something has got to give.”

One selling point for Knowde is that it breaks that logjam, according to investors like Maguire.

“One of the references said that they had a bunch of legacy flavors from the seventies,” Maguire said. “It was a  Madagascar Vanilla that none of their sales people had tried to sell for 25 years… By putting them on Knowde the sales numbers had gone up over 1,000%… That company does over $5 billion a year in sales through flavors.”

The change happened as the old guard of executives began aging out of the business, according to Amin-Jahaveri. “Between 2002 and 2012 nothing happened.. There was no VC money thrown at any type chemical company and then it started changing a little bit,” he said. “The first domino was the changing age demographic… these consumer product companies kept getting younger.”

Amin-Jahaveri’s previous company grew to $400 million in revenue selling technology and services to the chemicals industry. It was back-end software and customer relationship tools that the industry had never had and needed if it were to begin the process of joining the digital world. Knowde, according to Amin-Jahaveri, is the next phase of that transition.

“Our plan is to connect the chemical producers directly with the buyers,” Amin-Jahaveri said. “And provide all the plumbing and storefronts necessary to manage these things themselves.”

All that Knowde needed to do was collate the disparate data about what chemicals small manufacturers were making and had in stock and begin listing that information online. That transparency of information used to be more difficult to capture, since companies viewed their product catalog as an extension of their intellectual property — almost a trade secret, according to Amin-Jahaveri.

Once companies began listing products online, Amin-Jahaveri and his team could go to work creating a single, searchable taxonomy that would allow outsiders to find the materials they needed without having to worry about differences in descriptions.

Knowde has broken down the chemicals industry into ten different verticals including: food, pharmaceuticals, personal care, houseware goods, industrial chemicals. The company currently operates in three different verticals and plans to extend into all ten within the year.

Amin-Jahaveri knows that he’s not going to get a meaningful chunk of business from the huge chemical manufacturers like BASF or Dow Chemical that pump out thousands of tons of commodity chemicals, those deals only represent $2 trillion of the total addressable market.

That means another $3 trillion in sales are up for grabs for the company Amin-Jahaveri founded with his partner Wojciech Krupa.

While the opportunity is huge, the company — like every other new business launching in 2020 — is still trying to do business in the middle of the worst economic collapse in American history. However, Amin-Jahaveri thinks the new economic reality could actually work in Knowde’s favor.

“It’s going to be one more trigger event for these chemical companies that they have to go online,” he said. The personal relationships that drove much of the sales for the chemicals business before have dried up. No more conferences and events means no more opportunities to glad-hand, backslap, and chat over drinks at the hotel bar. So these companies need to find a new way to sell.

Maguire sees another benefit to the movement of chemical catalogs into an online marketplace, and that’s internal transparency within chemical companies.

“Even the biggest companies in the world do not have an internal search feature even for their own chemicals,” said Maguire. “I talked to two of the biggest companies in the world. In the case of one chemist who is a friend of mine. If you are trying to formulate some new concoction how do you find what chemicals you have in the company? If it’s in my division it’s pretty easy.. If I need chemicals from another division… there’s no way to search it right now.”

*This article has been updated to indicate that Bee Partners, a previous investor in Knowde, participated in the company’s Series A round. 8VC, another seed investor, did not.