Okta released a special COVID-19 edition of its app usage report today, and you don’t need a Ph. D. in statistics to guess what they found. Indeed, Zoom surged 110% on the Okta network, leading the way in usage growth just as you would expect, but another whole class of tools besides collaboration also saw huge increases in usage.

As Okta wrote in the report, “We see growth in two major areas: collaboration tools, especially video conferencing apps, and network security tools such as VPNs that extend secure access to remote workers.”

These plumbing tools might not be as sexy as the collaboration tools or boast triple digit growth like Zoom did, but they are seeing a substantial increase in usage as company IT departments try to bring some order to a widely distributed workforce.

As Okta pointed out in the report, bad actors have been looking to take advantage of the situation, as they tend to do, and these folks do love to sew some chaos.

The biggest winners here beyond collaboration tools were VPN businesses with Palo Alto Networks GlobalProtect and Cisco AnyConnect coming in at 94% and 86% usage increases respectively. But they weren’t the only tools growing, as Okta reported the Citrix ADC load balancing tool and ProofPoint’s security training apps also showed strong gains.

It’s probably not surprising that these kinds of tools are seeing an increase in usage with so many employees working from home, but it is interesting to see which vendors are benefiting from the move.

It’s also worth noting that Okta can point to a clear demarcation date when usage began to tick up. It’s easy to forget now, but March 6th was the last day of “normal” app usage before we started to see usage of these tools start to surge. 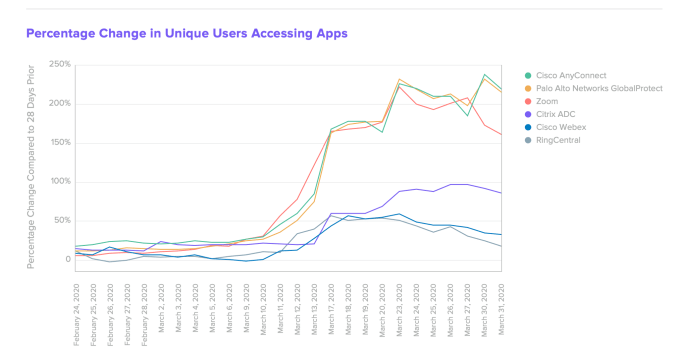 While reports of this kind are somewhat limited because of the focus on a particular set of customers and the tools they use, it does give you a sense of general trends in technology involving 8,000 Okta customers and 6,500 app integrations.