The coronavirus outbreak has driven more consumers to turn to their smart speakers for news, information, music and entertainment, according to new data released today by NPR and Edison Research. Around three-quarters of U.S. adults 18 and up said their routines have been impacted due to COVID-19 and their media habits have changed as a result. Since the outbreak, 35% of U.S. smart speakers owners say they’re listening to more news and information through their device, and 36% say they’ve increased their consumption of music and entertainment.

These figures skew even higher when looking at the 18-34 age group.

Here, 50% report an increase in news and information consumption and 52% said they’ve increased their listening of music and other sorts of entertainment.

In addition, the report found the total time spent listening to news content via the smart speaker has increased since the same time last year. In Spring 2019, 30% said listened to 3 or more hours per week, 40% said 1 to less than 3 hours, and 30% said less than one hour.

Smart speaker owners working from home during the COVID-19 outbreak were also more likely than smart speaker owners in general to make requests for news from their device on a weekly basis, but not as likely to ask for the weather, the time, or other updates.

In the work-from-home group, 65% said they use the device — at some point — to listen to the news while 62% of all smart speaker owners said they do.

Quarantined adults may also help to drive increased sales of smart speakers as they realize the value in spreading out the devices in the home.

A large number of smart speaker owners who have children said they’re now thinking of buying another device to entertain their kids.

Last spring, only 47% said they were thinking of buying a new device for the kids. Now, it’s 71%. 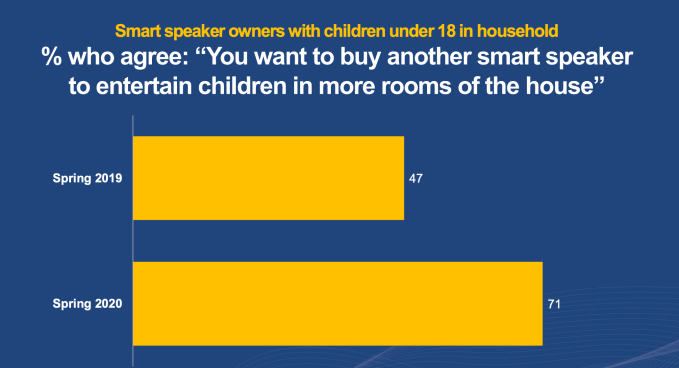 The data in the report referencing the changes after COVID-19 comes from a survey that took place from March 31 through April 1, 2020, the organizations said.

“With tens of millions of Americans no longer commuting, smart speakers are becoming even more important as a conduit for news and information,” said Edison Research SVP Tom Webster, in a release, “and this increased usage and facility with voice assistants will likely increase demand for this technology in vehicles once our commutes resume.” he said.

The further report examined other smart speaker trends, unrelated to COVID-19, including the use of smart devices with a screen and voice assistants on phones.