Zoom is an enterprise software company built to help employees meet virtually; it was never intended to be the social platform that guided a disconnected world through a lockdown.

On the back of a big quarantine usage bump, Squad, a social screen-sharing mobile app popular with teen girls, is looking to eat away at Zoom’s social growth and widen its app’s appeal with the launch of a desktop web version designed to help people binge TV shows and movies together.

While the quarantine has upended plenty of consumer-centric startups, Squad has seen record growth with teens stuck at home and socially distanced from friends. Over the first two weeks of March, CEO Esther Crawford says usage of the platform climbed 54%. As teens further settled into lockdown and schools went fully remote, usage of Squad exploded, climbing 1100% in the last two weeks of March.

Squad has designed a social platform around watching friends browse through stuff on their phones, virtually. On mobile, the most common use case has been teens hanging out while browsing through TikTok clips. Crawford hopes that where the mobile app has succeeded in allowing users to bond over short-form content, Squad’s new desktop web app will let users settle in and binge long-form content.

Crawford hopes that the app’s youthful users can use the platform to bond during an unprecedented time of social distancing.

“There’s already this global loneliness epidemic and it’s even worse for Gen-Z,” Crawford says. “I would imagine the coronavirus is accelerating this trend.”

Squad, the ‘anti-bro startup,’ is creating a safe space for teenage girls online

The killer feature of Squad’s new desktop app is watching TV shows and movies with each other on streaming networks like Netflix; this hasn’t been possible on Squad previously.

To combat piracy, most premium video mobile apps disable screen sharing functionality, a total blackout that has stopped apps like Squad from even sharing video with a few friends, something that the big platforms historically haven’t seemed to mind. Desktop browsers don’t have these same limitations and can allow desktop Squad users to watch premium content together, all streamed from a single user’s account.

Squad is still focused on intimate hangs and won’t be allowing groups to swell beyond 9 people. Keeping groups small will help minimize some of the issues faced by Zoom, but will likely also help the social app sidestep pissing off a Netflix or a Hulu. 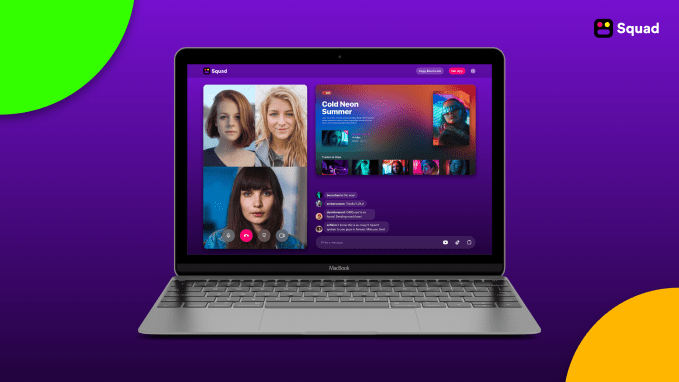 As Squad looks to outdo Zoom on social screen-sharing, one thing Crawford has no intention of doing is competing with their own workplace product. This, despite Crawford hearing that Squad has ended up in the toolsets of some designers and PMs that use the app to commiserate over mobile builds.

“If we were to expand to enterprise and have a Squad for business, it would just be a distraction,” she says.

Squad raised a $5 million Seed round last year from First Round Capital, and Crawford tells me the company recently topped up on a bit of new funding to ensure the company is well-positioned to handle some of the broader economic uncertainty. The startup has now raised $7.2 million to date.