The coronavirus pandemic is significantly slowing the growth of Facebook’s ads business, but investors seem pleased with the company’s performance in Q1 after Facebook released its earnings report Wednesday.

The company beat Wall Street expectations on revenues, sharing that they had made $17.74 billion while falling short on earnings per share at $1.71. The company also shared that monthly active users had swollen to 2.6 billion users, beating expectations of 2.55 billion.

While Facebook’s ad revenues in Q1 showcased 17% year-over-year growth, Facebook used its earnings announcements to hedge expectations for Q2. The digital ads market has taken a major hit in the past several weeks in light of the pandemic crisis. In its release, Facebook said they had seen a “a significant reduction in the demand for advertising, as well as a related decline in the pricing of our ads, over the last three weeks of the first quarter of 2020.”

Flat growth is far from the doomsday drop-off investors had feared may hit the digital ads market as cash-strapped businesses reeled in advertising budgets. 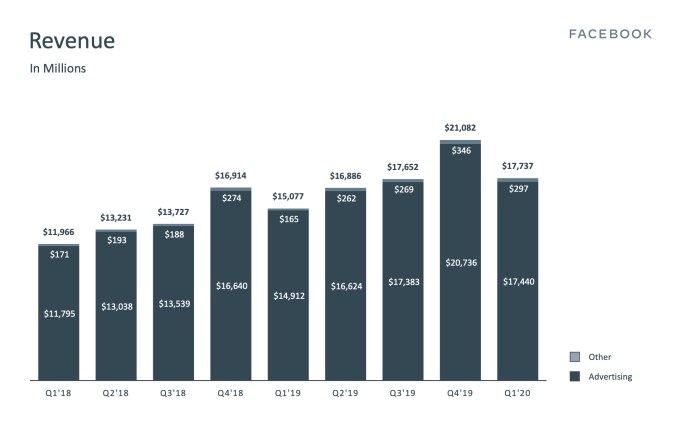 Facebook’s $17.44 billion in ad revenues makes up the lion’s share of its revenue growth, but the company’s “Other” segment of revenue, which includes various efforts, including its Portal and Oculus hardware business, grew 80% year-over-year to $297 million.