Instagram is today launching a new way for users to fundraise for nonprofits via Instagram Live, amid the coronavirus pandemic. While the company had already offered Donation Stickers for the use in Stories, the new Live Donations feature will allow anyone to create fundraisers while live streaming, either alone or with others for a sort of virtual telethon experience.

The feature arrives only a day after TikTok launched a donations feature that works in both its video posts and its live streams.

But unlike TikTok, which only supports a handful of charitable causes at launch, Instagram says its Live Donations feature can be used to create fundraisers for over a million nonprofits.

It also notes that 100% of the money raised goes directly to the nonprofit, as Instagram is not taking a cut — a common practice on some other fundraising platforms. 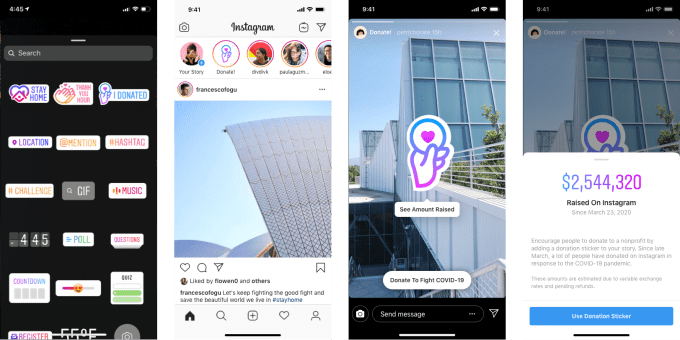 To use the new donations feature on live videos, you can either tap the camera in the top left of the Instagram Feed or swipe right in the Feed. You then tap “Live” at the bottom of the screen, select “Fundraiser” and choose the nonprofit you want to support.

When the broadcast begins, you’ll be shown how many people are supporting the fundraiser and the amount of money raised, in real-time. You can also tap on “View” to see a further breakdown of the donors, including the individual contributions, in case you want to give them shout-outs in your video — something you can also do in real time by tapping “Wave.” 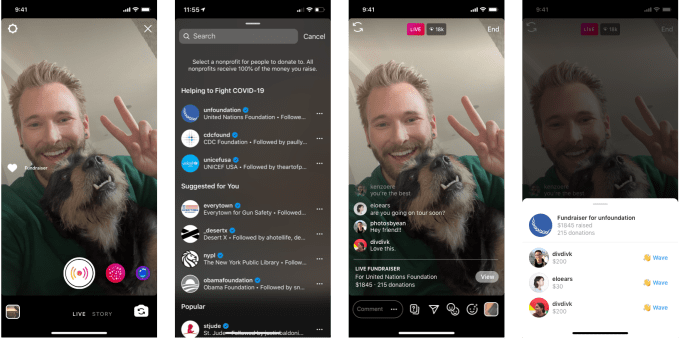 Those who raise funds, make donations to fundraisers or use the Donation Sticker in Stories will also unlock an exclusive “I donated!” sticker created by Brazilian community illustrator @leonatsume. This sticker can be used in your Story to raise awareness for the cause. Your post is combined into a shared story with others you follow who also donated, which you’ll find at the front of the line in your Stories bar.

This week, a number of public figures and creators will be taking advantage of the new Live Donations feature, including Sergio Ramos, Sofia Carson, @muslimgirl, @montoyatwinz, Tori Kelly, @tank.sinatra and Lisa Rinna.

In the last month, for example, Instagram Live usage was up 70% as users turned to the platform to host conversations, dance parties, rap battles and more. And many users were already raising funds for nonprofits over Instagram Live, despite the lack of an official feature, the company says.

Social platforms are one way people are connecting during the pandemic, with even Instagram’s previously floundering IGTV platform seeing a tremendous boost — the service’s daily users were up 48% month-over-month, from mid-March to mid-April, reported app store intelligence firm Apptopia.

Instagram’s parent company Facebook has been tapping into users’ increased interest in live video, too, with the recent rollout of a number of new features. Last week, it also introduced a way to fundraise over live video, for example. That feature works wherever Facebook supports nonprofit fundraisers. It also brought back “Live With,” so people could bring on guests as they go live — including for fundraising purposes.

And it launched a Houseparty-like experience called Messenger Rooms, a game-streaming app for Facebook Gaming, and the ability to go live from its Portal device to Facebook Pages and Groups, among other things.