With the company growing in leaps and bounds, Zoom went shopping for a new cloud infrastructure vendor to help it with its growing scale problem. In a surprising choice, the company went with Oracle Cloud Infrastructure as its latest partner.

The company indicated it also uses AWS and Azure.

Zoom has become the go-to video conferencing service as much of the world has shut down due to the pandemic, and life needs to go on somehow. It now claims to have 300 million meeting participants per day. That kind of usage puts a wee bit of pressure on your infrastructure, and Zoom clearly needed to beef up its game.

What’s surprising is that it chose Oracle, a company whose infrastructure market share registers as a strong niche player in Synergy Research’s latest survey in February. It is well behind market leaders including Amazon, Microsoft, Google, and even IBM (and that’s saying something). 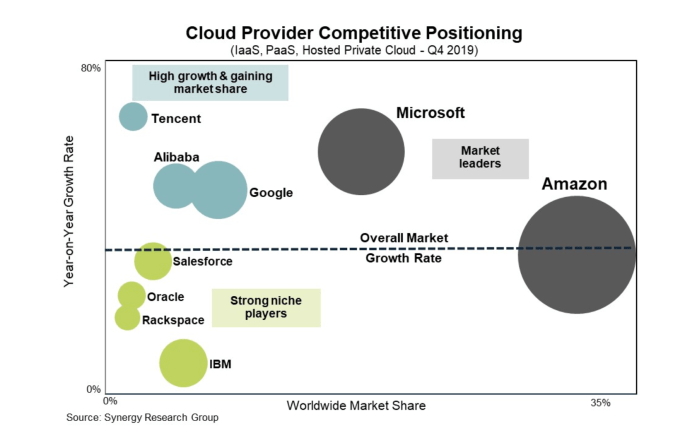 Brent Leary, who is founder at CRM Essentials, says he sees this as a move to show that Zoom can move beyond the SMB market to power enterprise customers, no matter what they demand.

“I think Zoom went with Oracle because they are proven in the enterprise in terms of mission critical apps built on Oracle databases running on Oracle hardware in the cloud. Zoom needs to prove to enterprises that they are able to handle scale and data security needed to beyond what SMBs typically require,” Leary told TechCrunch.

In addition, Leary speculated that Oracle might have given Zoom a good deal to get a hot company into the fold and beat rivals like Amazon and Microsoft.

It’s worth noting that CNBC reported a couple of weeks ago that Oracle chairman Larry Ellison called Zoom an “essential service” for his business, as well as others. It certainly seems in hindsight that was hardly a coincidence, as he was praising up his new prize customer.

Others have speculated that it might have to do with keeping business away from a potential rival given that Amazon with Chime, Google with Hangouts and Microsoft with Teams all have competing products. However, none of them have become synonymous with online meetings as Zoom has during this crisis.

Zoom went public last year and has become the darling of the video conference market since in spite of a set of security issues that have developed as the company scaled, which they have been working to address.

The stock market is apparently not impressed with the choice. As we went to publish, the stock was down 3.38% or $5.56.

Note: (4/29/2020) This story has been updated to indicate that Zoom has multiple cloud infrastructure partners.

Note (4/30/2020): The story has also been updated to reflect that that Zoom had made a claim of 300M daily active users. It later changed that to 300M meeting participants per day. The company has yet to release correct daily active users numbers.