Env0, a startup that wants to help companies bring some order to delivery of Infrastructure as Code, announced a $3.3 million seed investment today and the release of the Beta of the company’s first product.

Boldstart Ventures and Grove Ventures co-led the round with participation from several angel investors including Guy Podjarny of Snyk.

Company co-founder and CEO Ohad Maislish says the ability of developers to deliver code quickly is a blessing and a curse, and his company wants to give IT some control over how and when code gets committed.

“The challenge companies have is how to balance between self-service and oversight of cloud resources in a cloud native kind of way, and to balance this with visibility, predictability, and most importantly, governance around cloud security and costs,” Maislish said.

The product lets companies define when it’s OK for developers to deliver code and how much they can spend instead of letting them deliver anything, at any time, at any cost. You do this by giving overall control of the process to an administrator, who can then define templates and projects. The templates define which repositories and products you can use for a given cloud vendor and the projects correlate to the users allowed to access those templates. 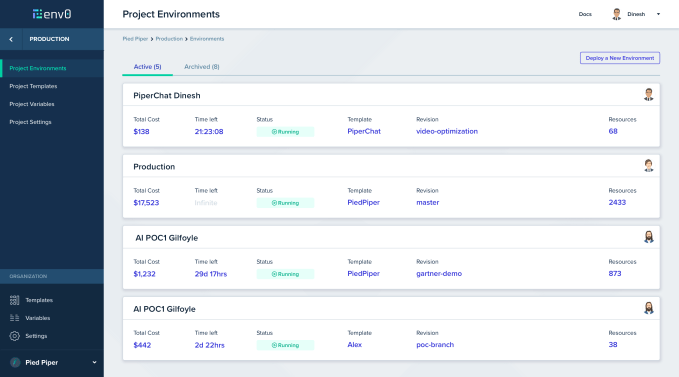 Ed Sim, founder and managing partner at Boldstart says the startup has been able to find a good balance between governance and the need for speed that today’s developers require in a continuous delivery environment. “Env0 is the first SaaS solution that meets all of those needs by offering self-service cloud environments with centralized governance,” Sim said in a statement.

It’s not easy launching an early-stage company in the middle of the current economic situation, but Maislish believes his company is in a decent position as it provides a way to control self-service development, something that is even more important when your developers are working from home outside of the purview of IT and security.

The company launched 18 months ago and has been in private beta for some time. Today marks the launch of the public beta. It currently has 10 employees.