If you have ever attended (or tuned into) one of Monzo’s many community events, you are likely familiar with the work of Simon Balmain. An early employee of the challenger bank, he has played a long-term role in helping to build Monzo’s customer support and community efforts and was often seen emceeing events.

Now TechCrunch has learned that Balmain is departing to join Sphere, the perpetually stealthy startup founded by Nick D’Aloisio, who previously founded news summary app Summly, which he famously sold to Yahoo at the age of 17 for a reported $30 million.

According to sources, former “Monzonaught” Balmain will be tasked with helping bolster Sphere’s community efforts. Sphere began life as a question and answer app that let you find and instantly chat to paid experts on a range of topics but has since pivoted to a chat app built from the ground up for groups.

“Sphere is a chat app for groups to feel closer and achieve more, together,” reads the App Store’s description. Features listed for Sphere Group Chat include the ability to create multiple chats for a single group; send highlighted announcements so no one in a group misses important messages; and send notifications to individuals or everyone who hasn’t read your message “in just one tap”. 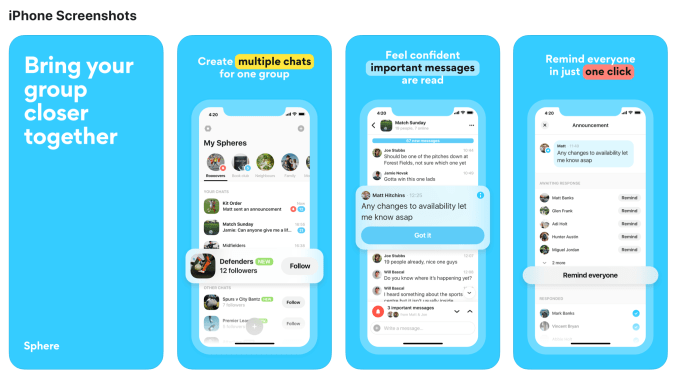 Meanwhile, we first reported on London-based Sphere’s existence back in October 2017, after being tipped off by sources and uncovering regulatory filings revealing that D’Aloisio had raised funding from Index Ventures, and LocalGlobe (the early-stage VC firm founded by Robin and Saul Klein). And in March last year, the FT reported that Sphere had raised a total of $30 million, adding Michael Moritz as a backer, and noting that the startup had unusually remained in stealth for a whopping 2.5 years.

That was a whole year ago. With a newly recruited community specialist, a less opaque launch is unlikely to be too far away.