Sarah Enni joins us this week to discuss her shift to remote interviews. Like many podcasters (myself included), the COVID-19 crisis has forced her to temporarily reexamine a longstanding in-person approach to something more acceptably socially distant. Enni is a YA author, who’s best known in the podcasting world for her show, First Draft. This month, she’s launching a spin-off miniseries titled, Track Changes: Everything You Don’t Know You Don’t Know About Publishing. 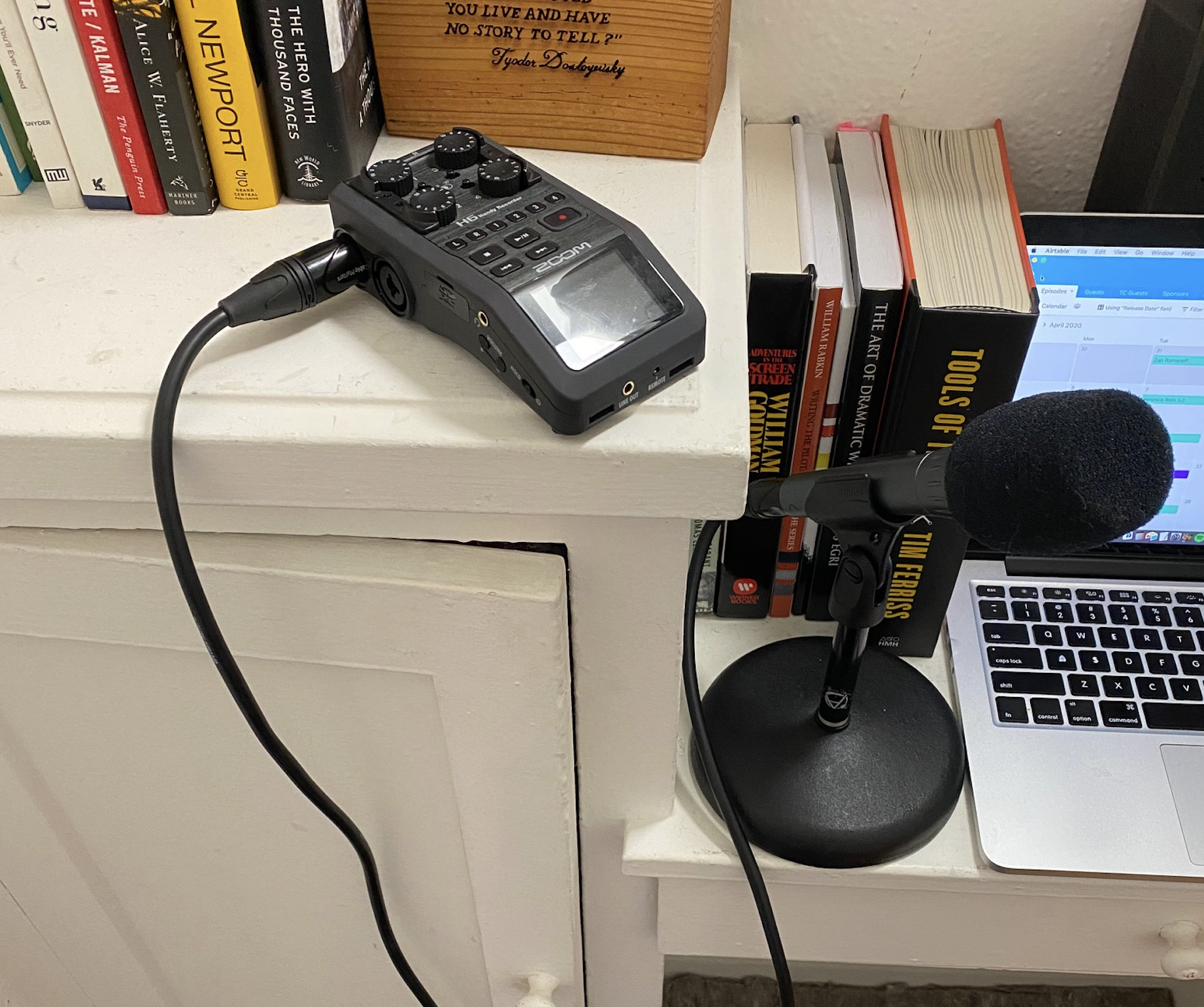 I was a legal reporter and aspiring novelist in Washington, D.C. in 2014, whose aspirations to be like Nina Totenberg led to starting a podcast: First Draft with Sarah Enni. During my time as a journalist, I’d shoved plenty of pocket-sized recorders in the faces of senators and their lawyers, so I went searching for a microphone-and-recorder in one that had better sound quality but was still portable. I landed on the Zoom H2n Handy Recorder, which I used, while set on a tripod, for the first two years of interviews with published authors. It had great audio for the price point and I loved that the Zoom was compact, which allowed me to get out into the field to conduct my interviews face-to-face. First Draft features long-form interviews with novelists and other storytellers, and the in-person connection is crucial to the honest and conversational tone of the show.

I backed everything up on an external hard drive, and edited in GarageBand while wearing Sony MDR-7506 headphones, then uploaded and published through LibSyn.

About three years ago, I decided to up my podcasting game. I hired a producer — Hayley Hershman, who works as an on-demand producer at MarketPlace with American Public Media — who helped me source new equipment. I upgraded to the Zoom H6n Handy Recorder and paired that with Shure BETA 87A Supercardioid Condenser microphones. And I bought a Timbuk2 dopp kit, which I repurposed to serve as a portable studio. I carry that in the GoRuck GR1 backpack (every other backpack tortured my shoulders and killed my back) along with my laptop and notebook. Never, ever show up to an interview without prepared questions, preferably hand-written. It matters to the guest. A lot. 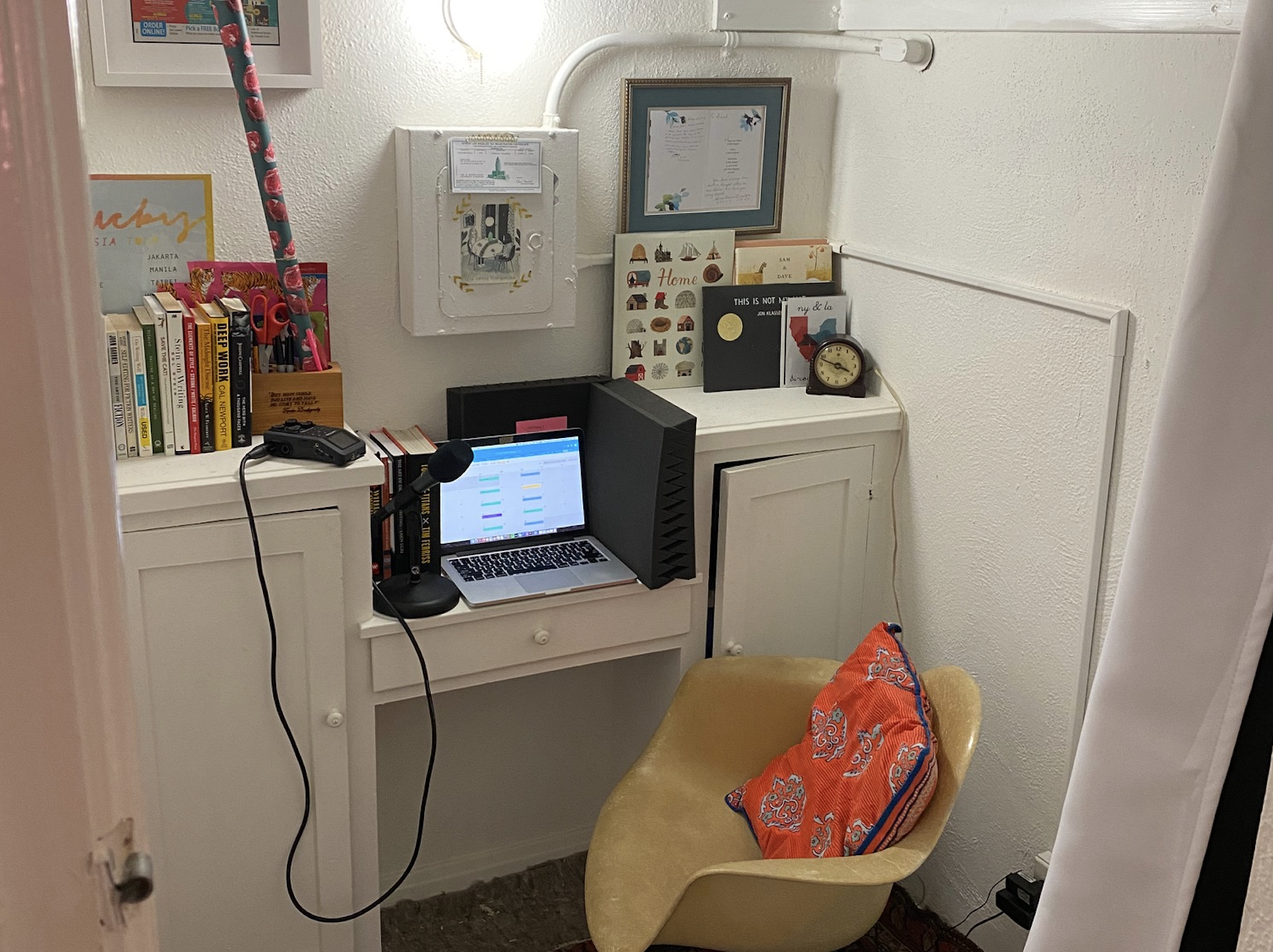 I gather interviews on the Zoom H6n (code name: Beemo) and upload the audio files to AirTable, which my team uses to streamline workflow. Of all the equipment I have ever sourced in my five years of podcasting, nothing has been more of a game changer than AirTable. Once I have audio files, including VO, and editing notes uploaded to AirTable, I alert my producer, who edits the show in Hindenburg. When the final episode is prepared, she uploads it to LibSyn as a draft so I can publish it there and on our SquareSpace website. I then upload the audio to Temi, which uses AI to create a rough first draft of an episode transcript.

Up until COVID-19, I conducted every single interview (245 of them) in person. But not even a pandemic could lead me to record audio off Zoom or Skype. While booking a guest, I coach them on how to record the conversation on their end using their USB mics or the voice memo app on their phone. Then my producer syncs the tracks for a polished finished product, where hopefully listeners can engage in the blissful fantasy that the guest and I recorded the episode together, in a studio, somewhere in Hawaii.

I’m in the midst of producing a new mini-series about the book publishing industry in the U.S., called Track Changes, and the equipment and workflow are essentially the same. I conducted almost all of the interviews in-person (pre-coronavirus), I used AirTable to communicate and share assets with my producer, and all the hardware remained the same. But now we’re having many more phone calls and sharing many more Google Docs trying to script and edit. After five years of podcasting, shifting into narrative non-fiction storytelling is an incredible challenge, and one I’m grateful to have occupying my time and mind right now.