As companies look for better ways to understand how different departments work at a granular level, engineering has traditionally been a black box of siloed data. Pinpoint, an Austin-based startup, has been working on a platform to bring this information into a single view, and today it released a dashboard to help companies understand what’s happening across software engineering from an operational perspective.

Jeff Haynie, co-founder and CEO at Pinpoint says the company’s mission for the last two years has been giving greater visibility into the  engineering department, something he says is even more important in the current context with workers spread out at home.

“Companies give engineering a bunch of money, and they build a bunch of amazing things, but in the end, it is just a black box, and we really don’t know what happens,” Haynie said. He says his company has been working to take all of the data to try and contextualize it, bring it together and correlate that information.

Today, they are introducing a dashboard that takes what they’ve been building and pulls it together into a single view, which is 100% self-serve. Prior to this, you needed a bunch of hand-holding from Pinpoint personnel to get it up and running, but today you can download the product and sign into your various services such as your git repository, your CI/CD software, your IDE and so forth.

It also provides a way for engineering personnel to communicate with one another without leaving the tool. 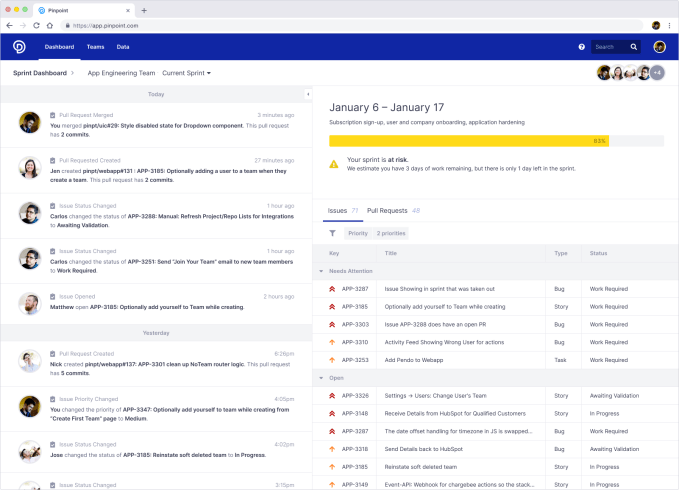 “Obviously, we will handhold and help people as they need it, and we have an enterprise version of the product with a higher level of SLA, and we have a customer success team to do that, but we’ve really focused this new release on purely self service,” Haynie said.

What’s more, while there is a free version already for teams under 10 people that’s free forever, with the release of today’s product, the company is offering unlimited access to the dashboard for free for three months.

Haynie says they’re like any startup right now, but having experience with several other startups and having lived through 9/11, the dot-com crash, 2008 and so forth, he knows how to hunker down and preserve cash. At the same time, he says they are seeing a lot of in-bound interest in the product, and they wanted to come up with a creative way to help customers through this crisis, while putting the product out there for people to use.

“We’re like any other startup or any other business frankly at this point: we’re nervous and scared. How do you survive this [and how long will it last]? The other side of it is that we’re rushing to take advantage of this inbound interest that we’re getting and trying to sort of seize the opportunity and try to be creative about how we help them.”

The startup hopes that, if companies find the product useful, after three months they won’t mind paying for the full version. For now, it’s just putting it out there for free and seeing what happens with it — just another startup trying to find a way through this crisis.