As the coronavirus wreaks havoc on economies and populations around the globe, the chaos also presents a unique opportunity for disinformation efforts.

According to a new report from social analytics company Graphika, which tracks online disinformation, Iran’s propaganda operations have turned to promote the country’s causes through the lens of the coronavirus in recent weeks. Since February, a group known as the International Union of Virtual Media (IUVM) has seeded memes, articles and videos promoting Iranian and Chinese interests and accusing the U.S. of creating the virus as a biological weapon. The IUVM efforts also blamed U.S. sanctions for worsening Iran’s situation and praised Iranian leaders for their response to the pandemic.

Through mid-February, accounts linked to the IUVM were preoccupied with the U.S. assassination of Qasem Soleimani, but they turned their attention to the coronavirus around the time that Iran reported its first COVID-19 deaths. An article in late February with the headline “Is coronavirus an American creation?” accused the U.S. of bioterrorism and claimed that “America is the biggest beneficiary to creating a virus that will paralyze China and pose internal challenges to a power that poses a threat to the White House in the economic sphere.”

A series of editorial cartoons also pushed the message that the U.S. was to blame for the pandemic, depicting President Trump as a the virus itself. As Iran began to recover from its worse wave of coronavirus cases, the message shifted to praising the country’s response to the virus and highlighting the failures of the Trump administration as the virus spread quickly through the U.S. 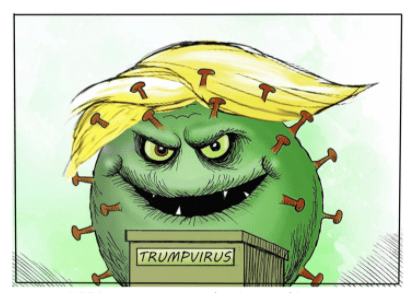 While the IUVM generally focuses its efforts on creating website content, it also promotes pro-Iran propaganda through social platforms. The propaganda group has struggled to keep a foothold on social media as platforms grow more savvy to disinformation threats, but the IUVM renewed its efforts with a handful of new accounts across Facebook, Instagram, YouTube and Twitter promoting pro-Iran coronavirus content. Those accounts, which had fewer than 5,000 combined followers, were taken down by April.

The IUVM can be expected to continue this kind of operation in the future, but Graphika notes that “its amplification network has been significantly disrupted by a series of takedowns over the years,” particularly on Facebook and Twitter.

“The IUVM operation is significant and manned by a well-resourced and persistent actor, but its effectiveness should not be overstated,” Graphika’s researchers said in the new report.