Houseparty, the popular video chat application acquired by Fortnite maker Epic Games in 2019, has seen massive growth due to the COVID-19 pandemic. With government lockdowns keeping people from being able to visit friends and other loved ones in person, consumer demand for video chat apps has skyrocketed. This has resulted in the video conferencing category of apps hitting record numbers in March, app store intelligence firm App Annie recently reported. Until now, however, Houseparty had remained quiet about its own metrics.

Today, that changed, as Houseparty revealed that in the past month, its app has seen 50 million sign-ups — a figure that’s around 70 times above normal in some markets.

According to data from Apptopia, Houseparty has seen record mobile downloads, as well, with installs spiking in recent weeks. During the past 30 days, Houseparty has seen 17.2 million new installs across iOS and Android, by its estimates. A different third-party estimate from Sensor Tower sees 28 million installs, however.

But the Houseparty app is also available for Mac and Chrome, which aren’t included in these figures. 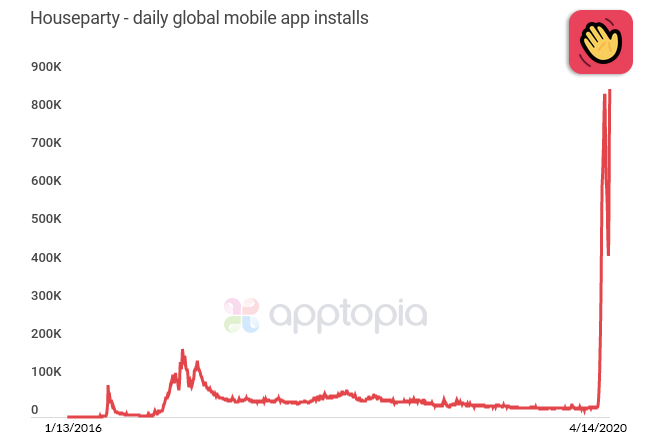 The increased consumer demand has also seen the app topping the mobile app stores’ charts in a number of markets, the company said.

Houseparty became the No. 1 Social app in 82 countries, including the U.S. App Store. It was also the No. 3 Social app on the U.S. Google Play store.

The app grew to become the No. 1 Overall app in 16 countries, as well. And in the U.S. App Store and Google Play, it got as high as the No. 2 Overall app.

The company said users have engaged with the app for long session times, with the average time in conversation per user remaining at more than 60 minutes. During the COVID-19 pandemic, these average times were sometimes even as high as 80+ minutes.

Houseparty has typically appealed to younger users than those on other video chat apps, as it’s designed for social hangouts. For starters, the app integrates with Snapchat. And like Snapchat, it also heavily relies on gesture-based navigation that older users tend to struggle with. Plus, it offers in-app games to play, like trivia or Ellen’s popular “Heads Up,” among others.

Meanwhile, video chat rivals — like Zoom, Skype and Google Hangouts — are often used by remote workers and in a corporate setting, in addition to their emerging consumer use cases. This tends to have the apps skew a bit older and distances them from the idea of being “fun.”

That being said, with the increases in usage tied to COVID-19, Houseparty claims people of all ages and backgrounds are now joining the app. 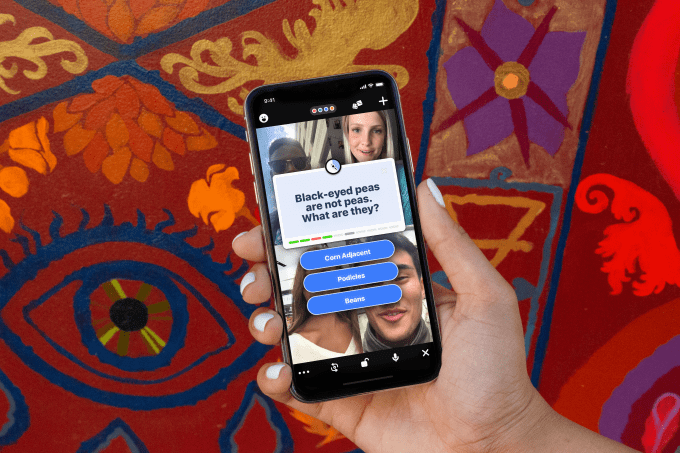 In addition, Houseparty’s users are connected to an average of 23 friends and nearly half of users having conversations are playing games — a figure the company had not previously revealed. (The company recently made all its games free to play, which has likely impacted usage.)

While the U.S. has always been Houseparty’s largest market, App Annie last month reported on Houseparty’s growth, noting it had seen particular demand in Europe. This included countries like Italy and Spain, where installs during the week of March 21 surged at 423x and 2360x, respectively, the average weekly number of installs in Q4 2019. What’s remarkable about the growth is that some of the countries, like Spain, were markets where Houseparty never had wide-scale penetration before the COVID-19 crisis.

Though Houseparty tends to keep its core metrics under wraps — like total users or revenue, for example — it likely released its new numbers today for a variety of reasons.

For one, Houseparty may just want to redirect focus from an odd situation where it was recently accused of a data breach by way of social media posts from users. Through tweets, users claimed their Houseparty user data was being used to access other accounts, like Netflix and Spotify. But Houseparty denied the breach and even suggested that the social media posts were a part of a “paid commercial campaign” aimed at harming its business. It offered a $1 million reward for any evidence that proved this theory. Nothing yet has come of that and some of the accusations posted have since disappeared.

In addition, Houseparty rival Zoom was recently criticized for a variety of security and privacy issues, which the CEO Eric Yuan has since apologized for and promised to fix. But in the meantime, Houseparty may hope to boost its install base further by appealing to those who are now looking for a Zoom alternative. (Although Houseparty has its own privacy issues, it’s not been as widely reported.)

Finally, there’s the fact that there aren’t that many times in a company’s life where it can detail its outsized growth like this. It’s unprecedented for there to be some 158 million Americans being told to stay at home, plus millions more worldwide, which creates an ideal climate for video chat apps to thrive.